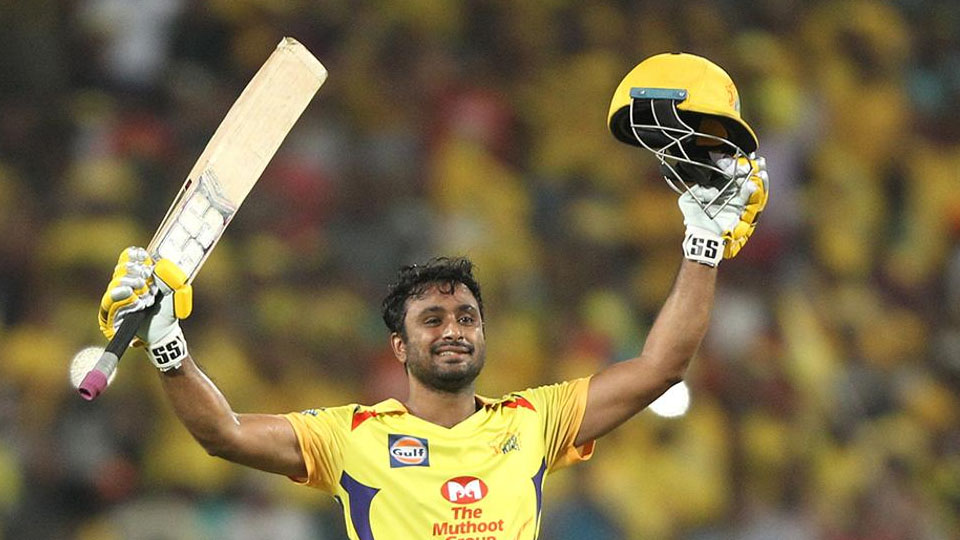 It was the game Chennai Super Kings  needed to win to close in on a place in the knockout stages and Mahendra Singh Dhoni’s boys did it in style as they beat Sunrisers Hyderabad — the Goliaths of this season of IPL — by 8 wickets to register their 8th win in this edition of the cash-rich league and sit pretty with 16 points from 12 games. While they are technically in a comfortable zone, another win will confirm their place in the last four.

Ambati Rayudu finally registered a hundred after playing some quality knocks right through the season, eclipsing his previous best score of 82 against Royal Challengers Bangalore on April 25 in Bengaluru. He almost had Dhoni robbing him the milestone, before the skipper took a single with the team needing 2 and Rayudu needing a single to reach the three-figure mark. Brought into the India team for the ODI series against England, Rayudu extended his celebration as CSK are now almost through to the knockouts barring a mathematical scenario where they lose the remaining games and others win handsomely.

Chasing 180 on a wicket which looked dicey during the SRH innings, Shane Watson and Rayudu started with panache. Not dropping a sweat, they kept taking the Hyderabad bowling — considered the best in the tournament — apart and sent them into the stands at the Maharashtra Cricket Association Stadium in Pune. When SRH finally picked their first wicket, Watson (57) run out trying to snatch a quick single, the score read 134/1 in the 14th over with Chennai needing only 46 more to win off 39 balls. Suresh Raina was dismissed for just 2 as Kane Williamson picked a smart catch off Sandeep Sharma’s bowling. M.S. Dhoni was the next man in amid huge cheers from the Chennai fans in Pune.

Things went from bad to worse for SRH when they dropped Dhoni on 2, by Manish Pandey at long-on. After that, it was nothing but a walk in the park for Chennai as Rayudu showed his class to finish things off in a rush. In the end, Rayudu was unbeaten on 100 as Chennai went home with 6 balls to spare.

Ambati Rayudu was chosen as the Player of the Match.

Jos Buttler scored his fifth consecutive half-century as Rajasthan Royals increased their chances of reaching the playoffs with a convincing seven-wicket win over Mumbai Indians.

Chasing 169 to win, Buttler dominated from the word go and continued his sensational form as he stayed unbeaten on 94 off just 53 deliveries. This after he lost his opening partner D’Arcy Short early after Jasprit Bumrah removed him in the first over.

Captain Ajinkya Rahane and Buttler then put on a 95-run partnership for the second wicket with Rahane proving to be a calming influence for Rajasthan.

By the time he departed for a 36-ball 37 the job was more or less done for the visitors. Samson then joined Buttler and hit a couple of big ones, he wanted to finish things in style but was dismissed on 26 by Pandya. Buttler then deposited the next ball into the stands as Rajasthan reached the target in just 18 overs.

Jos Buttler was chosen as the Player of the Match.