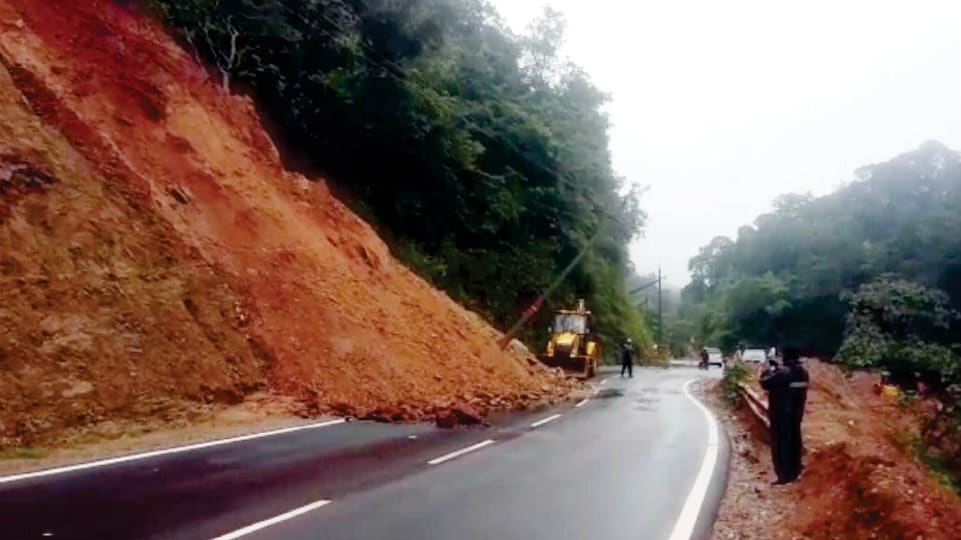 Madikeri: With the monsoon gaining traction in the district and the India Meteorological Department (IMD) predicting heavy rains (204 mm of rains) from July 22 to 24, the Kodagu District Administration has re-issued ‘Red Alert’ across the District.

Kodagu District Deputy Commissioner Annies Kanmani Joy has asked the public and the tourists to take necessary preventive measures in the wake of ‘Red Alert.’

Earlier, the IMD had predicted heavy rains from July 20 to 25, following which the District Administration issued a ‘Red Alert’ notice. But as the rainfall was not on predicted lines, the authorities toned down the level of alertness to ‘Orange Alert’. But now as the monsoon is picking up with heavy rainfall, the District Administration has reverted the alertness level to ‘Red Alert’.

With the monsoon getting active once again, Kodagu received good rainfall on Monday, following which the water level at Dams in the district has risen considerably. Also, water level of Bethri, Lakshmanathirtha and Kumaradhara in the district too has increased.

However, the rainfall this year is significantly less in Bhagamandala and Talacauvery Hill ranges as compared to the previous year at this point of time. Last year, the Triveni Sangama at Bhagamandala had overflowed four times in June and July, thus submerging Madikeri-Bhagamandala and Bhagamandala-Aiyyangeri Roads, severely hampering road connectivity in the district.

Although some people suspect cloud seeding as the reason for the sudden splurge in rainfall, the District Administration has rubbished the speculations saying that no official information has been received in this regard from the State Government.

Meanwhile, the inflow at Harangi Reservoir has increased considerably, following which water level has risen above the dead storage level, thus relieving the concerns of the people to some extent. Following the rise in water level, the authorities released 500 cusecs of water in canals of the Reservoir yesterday. However, the Cauvery Neeravari Nigam Ltd.,  (CNNL) which controls the Dam, has advised the people to use the water only for domestic purpose and not to utilise the water for irrigation. The CNNL authorities have also clarified that the Government cannot be held responsible for any crop loss in the future if farming in done using the canal water.

Even as rainfall continued to batter Kodagu district for the second day today, a landslide was reported near Madenadu on Madikeri-Mangaluru Road, which is part of NH-275.

The landslide, which was said to be not of a major proportion, happened in the wee hours of this morning, disrupting vehicular traffic on the Highway for sometime. However, the authorities partly cleared the road, allowing one-way traffic periodically, which eased the vehicular movement.

Meanwhile, Bhagamandala, which usually takes the brunt of monsoon rainfall every year, has so far recorded only 62 inches of rain this year, as against 167 inches at this point of time last year, which indicates a sharp decline in rainfall this monsoon.