Home » Feature Articles » Rehab on a slippery slope in Kodagu 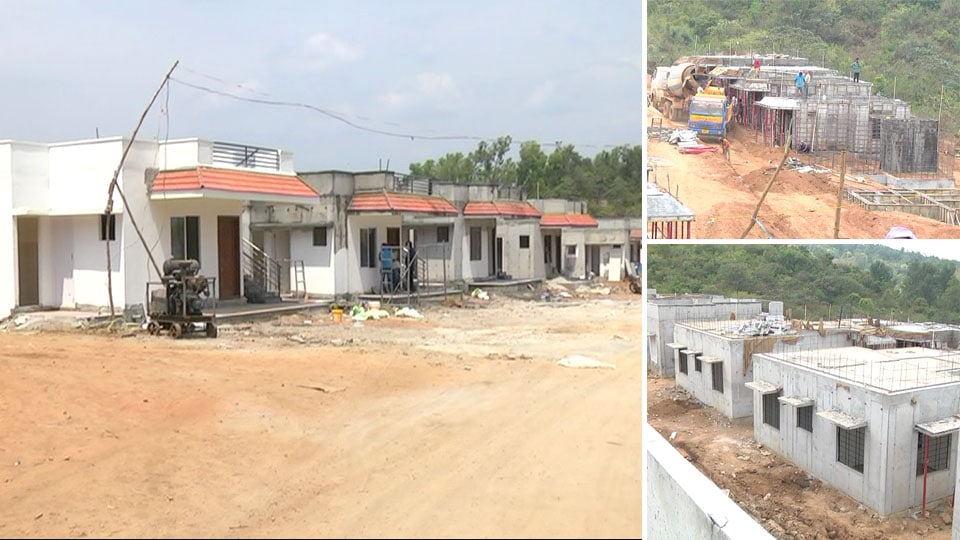 Rehab on a slippery slope in Kodagu

Many villages were wiped out by devastating floods and landslides and mud came crashing down carrying everything in its path — trees, electric poles and houses. Kodagu received over 200 mm rainfall on three consecutive days, on Aug. 15, 16 and 17, according to the Karnataka State Natural Disaster Monitoring Centre (KSNDMC). It was the highest amount of rainfall in Kodagu in 87 years and it forced thousands of people to take shelter in 55 relief camps and over 20 persons lost their lives.

It is April 2019 now and this year’s rainy season is set to begin in June and will reach its peak in August-September. But so far, the ambitious housing project announced by the State Government last year has not yet been implemented. Only a part of the works have been completed and it will start raining in another two months. The residents who are waiting for houses dread the thought of returning to gruel centres if houses are not ready by rainy season.

Yet to be completed houses

The phase-by-phase mega rehabilitation housing project was taken up by the Government under the Rajiv Gandhi Rural Housing Corporation Ltd. (RGRHCL) and though the works began in full swing after months of delay, the projects are yet to be completed. The work order was issued to RGRHCL in November last year and each house has two bedrooms.

The first phase was supposed to realise 400 houses and it has already started raining in Madikeri and the people who have been promised houses are a worried lot as they are not sure when the houses will be handed over to them. There is a strong resentment among the house aspirants as politicians had promised to complete the houses by January 2019.

Over 38 houses are being built at Karnangeri near Madikeri and 90 percent of the works have been completed. Once the construction works are complete, authorities have to provide basic facilities like power, water, roads and underground drainages. Over 80 houses are being constructed at Golikatte near Madenadu and only 40 houses are reaching final stages of completion with the workers fixing doors and windows. The remaining houses have been left untouched after laying the foundation works.

The biggest housing project is being taken up at Jamboor village near Madapura where the administration has aimed to construct 318 houses. While foundation works are in progress for 55 houses, another 55 houses are nearing completion stage and work on fixing doors and windows are in progress. Here too, the basic living facilities have to be provided. At Jamboor, Infosys Foundation will construct 200 houses and a memorandum to this effect has been signed between the Foundation and the State Government. Foundation Chairperson Sudha Murty performed bhoomi puja at the construction site on Mar. 25 and the works have just begun.

District authorities are aiming to complete 38 houses at Karnangeri and 80 houses at Golikatte near Madenadu in the first stage and then complete 423 houses in all at Jamboor by June end. But flood victims are sceptic as according to the normal rain schedule, it will start raining in Madikeri and Somwarpet from the first week of June and as an indication to this, it has already started raining. “Again we will be forced to live amidst slush,” say house aspirants who blame it on their fate.

In all, 840 families have been affected by nature’s fury and the State Government had decided to build houses for all of them. Out of 840 houses, 770 houses were to be built on an emergency mode and the responsibility of supervising the house construction has been handed over to Karnataka Habitat.

In the village-wise list, 40 houses would be built at Karnangeri, 30 at Biligeri, 125 at Galibeedu, 175 at Madenadu and 400 at Jamboor. Each house (415 sq. ft.) is being built at a cost of Rs. 9.85 lakh and precast concrete slabs are being used for construction. The houses are fire and earthquake-resistant and have all the modern facilities, say District authorities.

Those people who have lost houses in the natural calamity are being provided with a rent of Rs. 10,000 per month. Like this, Rs. 48 lakh is being provided to 480 families per month, say the officials. Initially there were some hiccups in the distribution of rent amount as there were some discrepancies in the bank account details of the victims. But now the rent money is being directly credited to their accounts, officials say.

Meanwhile the villages that were destroyed in the calamity continue to live under constant threat of landslides. There are gaping holes and caved-in earth in the land where landslides have occurred indicating loose soil and more landslides this year. Such gaps in the earth have been detected at a few paddy fields and coffee estates in Madikeri and Somwarpet Taluks that were unaffected last year. Residents fear that if water enters such gaping holes and earth cracks, there will be more landslides this year. Villagers living in Jodupala, Monnangeri, Second Monnangeri, Tanthipala, Madenadu, Meghathalu, Yemmethalu, Kaloor and Hebbatageri are still living in constant fear and it may take years for them to come out of the nightmarish experience.

Kodagu’s burgeoning coffee and pepper trade and its tourism appeal is the driving force of the district’s economy. According to the Coffee Board of India’s May 2018 report, Kodagu accounts for 1,07,089 hectares of the 2,44,785 hectares of coffee plantations in Karnataka, while the State is responsible for more than half of India’s coffee production. Hundreds of coffee and pepper growers have been hit by the landslides. Plantation owners say that the areas wiped out by the landslides cannot be cultivated for a long time. It will take at least 8 to 12 years to grow coffee from scratch and it will be at least ten years or more before they start giving yields anywhere close to what was being produced before the landslides, say growers.