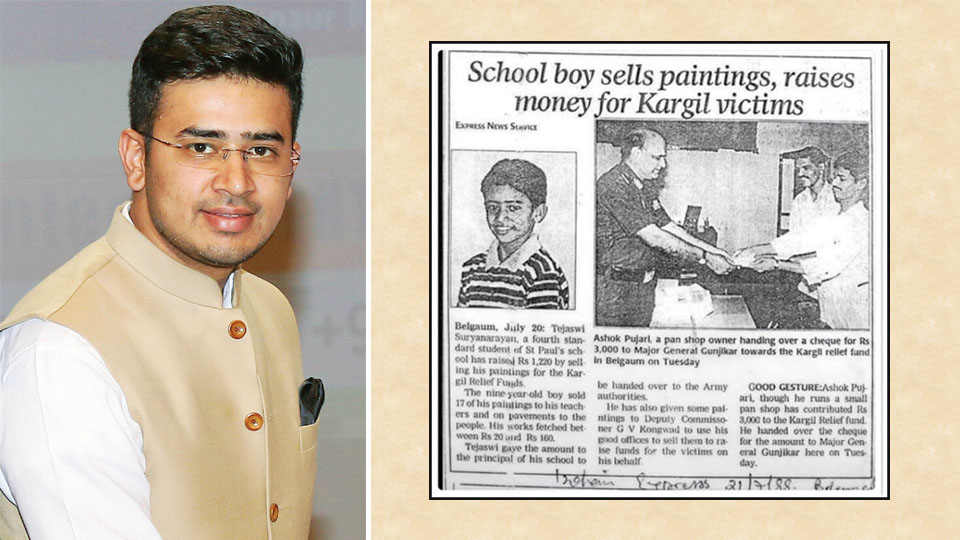 This morning, I got a surprise WhatsApp message about Tejasvi Surya, the 28-year-old advocate and the surprise candidate from BJP to contest the Bengaluru South Parliamentary Constituency. The WhatsApp was a pictorial news item published in the Indian Express dated 21.7.1988 from Belgaum. The news item is produced here at the 5th column bottom and self-speaking.

The message attached to it from the sender read: “20 years ago a little boy, studying in the 4th standard, raised money for the Kargil victims by selling his paintings. Today, he is one of the youngest Lok Sabha candidates fielded by the BJP from Bangalore — Advocate Tejasvi Surya.”

This WhatsApp message reminded me of my own effort in Pune along with my friends to collect money from the small crowd that had gathered to listen to, if my memory serves me right, young Subramanian Swamy and other local leaders during Emergency. I think it is in times of war, an Internal Emergency like that of 1975, natural calamities, famine and civil war that we tend to realise the importance of the feeling of patriotism and idea of Nationalism — My Country, My Land and My Identity.

Surely, it is this spirit of Nationalism that must have motivated this young boy of 9-year-old to somehow contribute his mite for the cause of the nation which was in war with its enemy. I did not know this boy, who hit a political jackpot by getting nominated to contest the Bengaluru South Parliamentary Constituency, was a painter of some merit that people really bought his paintings for its value as an artwork or in admiration of the young boy’s spirit of patriotism. Let it be.

I wonder if he is still pursuing this creative fineart which comes like a grace from the Lord to only a few among the  teeming millions of people. After all, no matter what profession one is in, he or she will pursue as a vocation or as an offering to the Almighty, what creative talent one is born with — art, music, dance, drama, literature etc. No wonder, it is said that what man is born as is the gift of God to Mankind. But what this man becomes in life is that man’s gift to God. Whatever it be, for now, I wish Tejasvi Surya a great victory in the election he has just contested so that it could be a great gift to Mother India, our Nation.

It is most unfortunate, after the first five years of Nehru’s Left-ideology-based rule of 16 years, there was a steady decline of political and moral values in the administration of the country. Elections were rigged,  violence was common during elections and corruptions at different levels, beginning with the Defence purchases, began to surface. Remember the Jeep Scandal when V.K. Krishna Menon was the Defence Minister in Nehru’s Cabinet? Thereafter, corruption and maladministration continued unabated when Indira Gandhi gave it a sort of official stamp of acceptance by declaring, “corruption is a universal phenomenon,” thereby implying what is universal cannot escape India also and, therefore, accept it as a necessary evil. But it was Nehru who had said in great flourish, “Hang the corrupt man by the nearest lamp post.” Sadly, this evil of corruption spread like a canker, debilitating  the political and economic health of the country so much so our rulers, politicians and bureaucrats ceased to be patriots. This went on unabated during the one-party rule of the Congress and later by the political leaders of the regional parties as well.

Take for example, the recent ones relating to the Nehru family involving National Herald case, AgustaWestland and the tax appeals. In fact, Rahul and Sonia are on bail. Similarly, Robert Vadra, the son-in-law of Sonia Gandhi. There are cases filed against P. Chidambaram, former Home and Finance  Minister and also his son Karti Chidambaram.

It is curious and a testimony to the extraordinary capability of their advocates that none of them could be made  available for interrogation in the way most others under such situations are dealt with by law. There was Om Prakash Chautala, son of Devi Lal, a former Deputy Prime Minister of India, who was charged in connection with the appointment of 3,206 junior basic teachers in the State of Haryana.

In January 2013, a New Delhi Court sentenced Chautala and his son to 10 years imprisonment under Prevention of Corruption Act and the case was upheld by the Delhi High Court and the Supreme Court. Then we have the most irrepressible man of hubris Lalu Prasad Yadav, the former Chief Minister of Bihar. The nemesis caught up with him in what is known as 1996 Fodder Scam and so many cases ending with conviction for looting the treasury of crores of rupees. He is said to be in jail, I think, unable to get bail. There are other cases also against him and his son — Patna Zoo Soil Scam or Benami Disproportionate  Assets case.

Likewise, there are other cases too that happened during the dark days of UPA Government from 2004 to 2014 where we had a very rich harvest of scams that ran into many lakhs of crores of rupees — 2G Spectrum Scam, Indian Coal Allocation Scam, Commonwealth Games Scam, Wakf Board Land Scam,  Telgi Scam, etc. Surprisingly, though these cases are making news for more than five years, the common man of India has not heard of any one being given justice or jail. Nor did I see anyone hanging by the nearest Nehruvian lamp post! That speaks about efficiency and quality of our legal administration.

Let me not forget here the case of Sukh Ram, who was the Telecommunications Minister in P.V. Narasimha Rao’s Cabinet (1996). The CBI officials seized from his official residence Rs. 3.6 crore in cash concealed in bags and suitcases. Altogether, he was convicted and sentenced in three cases. I learn that the case is pending in the Supreme Court where he has gone on an appeal — 23 years and the case is still going on…

With this kind of politicians ruling us, we don’t need a Nostradamus to tell us that this country has a bleak future, unless new generation of youngsters like Tejasvi Surya come to occupy political offices, charged with the sense and spirit of patriotism and nationalism.

It is these young leaders of the new generation, who would follow the advice given to Americans by its late President John F. Kennedy — “Ask not what your country can do for you — ask what you can do for your country.”

17 COMMENTS ON THIS POST To “Cry, my beloved country! : Let young leaders bloom”