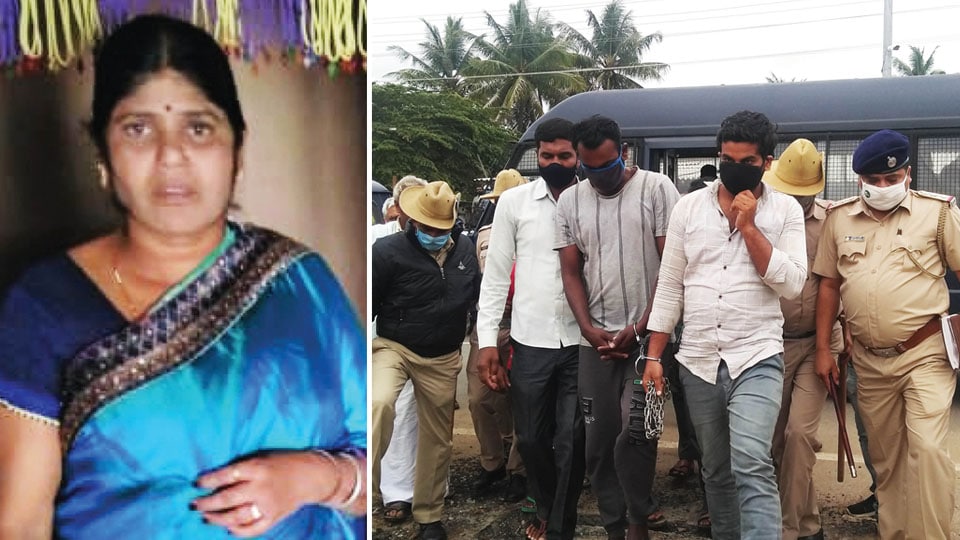 Bettadapura: A woman has been allegedly murdered for property by her relatives, who later threw her body into Cauvery River, in Bettadapura Police limits in Periyapatna taluk and the Police have taken six persons into custody in connection with the murder and are interrogating them.

Gangamma (45) of Bettadapura is the one who has been murdered by her relatives and the Police, along with Fire and Emergency Services personnel, have launched a search operation to trace and fish out the body.

Gangamma, a native of Marur village in Hunsur, was given in marriage to Virupaksha of Bettadapura village 25 years ago and the couple has no children.

It is learnt that her relatives used to frequently harass her to give them her property and Gangamma had filed a complaint against her relatives with Bettadapura Police, who had called her relatives to the Police Station and had warned them not to harass Gangamma besides getting a letter signed by them.

But on Aug. 3, Gangamma, who had gone to the house of her brother’s son-in-law and returned back, had gone missing and her brother Govindegowda had lodged a missing complaint at Bettadapura Police Station on Aug. 7.

How the murder secret was revealed?

On Aug. 14, when Govindegowda came in search of his sister Gangamma to Bettadapura village, two persons known to him — Vijayakumar and Venkatesh — told him (Govindegowda) that on Aug. 13, when they were going near Santhemala, two persons — Rajesh and Manju — who were fully drunk told them that they had murdered Gangamma and had thrown her body into the river and though Gangamma’s brother had lodged a complaint, the Police could do nothing. Following the statements from Vijayakumar and Venkatesh, Govindegowda on Aug.15 lodged another complaint.

According to Police sources, the accused are said to have revealed that Gangamma had shared her share of the house to one Jyothi and fearing that Gangamma would sell her share of the properties and they would get nothing, they (accused) strangulated Gangamma with a towel on Aug. 3 night at her house, shifted the dead body in a goods auto near Hanasoge village in K.R. Nagar taluk and threw the dead body into Cauvery River.

The Police team comprising Periyapatna Circle Inspector Pradeep, Bettadapura Sub-Inspector Puttaraju and staff Dileep, Harish, Bhaskar, Manju and Shekar are continuing with their investigation besides searching to trace the body of Gangamma in the river. The Police team also brought the accused to the spot and are collecting vital information from them.