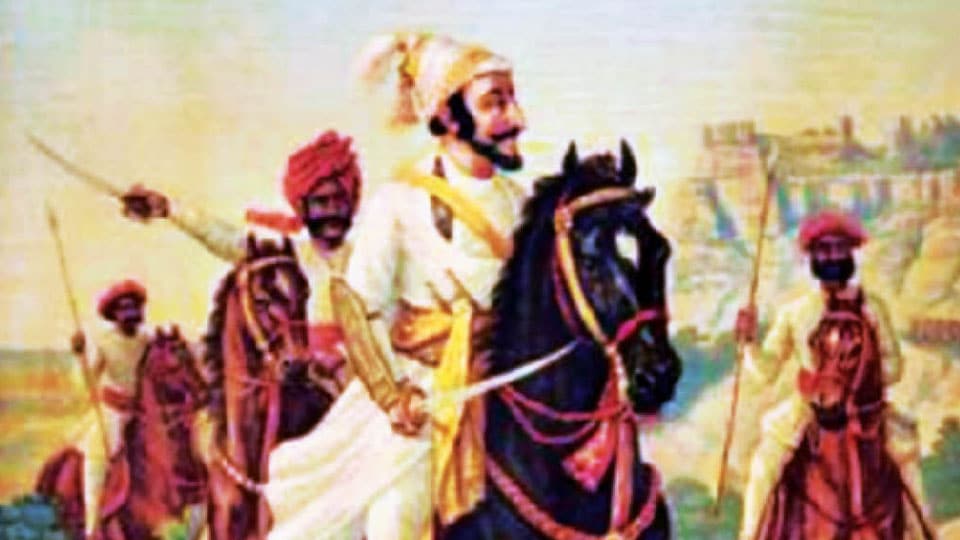 Domestic difficulties in his last days

When everything looked good for Shivaji and his expanded empire which included an important Fort Gingee, deep inside Tamil country ruled by Shivaji’s second son Rajaram, his peace was soon clouded by the domestic difficulties. His wife queen Soyara Bai indulged in Palace intrigues and demanded her son Rajaram should succeed Shivaji as an Emperor. The reason given was that Shivaji’s first son Sambhaji was more into selfish indulgence and was unstable. His character was scandalous with an affair with a Brahman woman so much so Shivaji himself had arrested and imprisoned Sambhaji.

It was this same Sambhaji who had accompanied his father to Agra and got imprisoned by Mughal Emperor Aurangzeb. He was so vain that he took to dressing like Mughal courtiers and worse behaved like one.

When he was in Shivaji’s prison he had the temerity to send a letter to the Mughal Commander-in-Chief Dilir Khan and with his assistance, escaped from the prison and took refuge in Mughal territory. He was also appointed as a Commander of a cavalry unit of Mughal army. Dilir Khan had even made a suggestion to Aurangzeb to recognise Sambhaji as the king of Marathas and thereby divide the Marathas into two factions, weaken them and then finally conquer.

However, Aurangzeb, as usual, suspected Dilir Khan’s good faith in advancing Sambhaji’s cause. So Aurangzeb ordered Dilir Khan to arrest Sambhaji and bring him as prisoner to Delhi. Sambhaji realised from the way Dilir Khan was treating him that there was danger to his life and escaped and went to his father Shivaji.

Shivaji, always fond of his first son Sambhaji despite his wayward behaviour, received his son without reproaches, embraced him and talked to him with affection almost in the manner described in the biblical parable “The Prodigal Son.” But, he was neither given any position nor admitted to the court.

When Shivaji was on his death bed, Sambhaji was not immediately informed. He was at that time living in the Panhala Fort where Shivaji had imprisoned him. However, when he heard of Shivaji’s illness, he mounted his camel and rode towards Raigad. Sadly, Sambhaji was told that Shivaji was dead when he reached there. It is said, in a fit of sadness and anger, he turned on his camel and cut off its head. According to one book, Sambhaji got statue of a headless camel raised on that spot as a mark of his disappointment and grief. The monument still stands at that spot. Tourists who visit Raigad might look for this monument like the tourist who went to Pratapgad wanted to see the place where Shivaji had killed Afzal Khan.

Here, it must be mentioned that the last years of Shivaji’s life was marked by his role as a defender of Bijapur Sultanate. The Sultan was a minor and queen mother was disliked not only by her son but also by the courtiers because of her unbecoming conduct as the queen. She went on a cruise in the Arabian sea with Dutch sailors discovering a sudden taste for romance in her old age. A quarrel took place when the promise made to give a Bijapur Princess to one of Aurangazeb’s sons was broken leading to a war between Bijapur and Mughals. Dilir Khan, the Mughal General, attacked Bijapur territory and kept the city under siege.

The people of Bijapur became desperate. At last the queen mother of Bijapur approached Shivaji for help. Shivaji agreed to help under conditions conducive for his empire and sent two of his Generals to challenge Dilir Khan. The Mughal army was routed and Bijapur became a vassal State like Golkonda earlier. Historian Dennis Kincaid writes the priests of Bijapur offered prayers in the shrine of the religions bowing before the casket for Shivaji’s safety and prosperity. And as Shivaji rode on his horse into the Palace courtyard, he must have thought of the day, 42 years ago, when his father introduced him to the very Palace and the then Sultan. He must have remembered the occasion when he refused to prostate before the Sultan in a Persian style, instead saluting him in the Maratha style which was considered defiance of the Durbar protocol. As a result, as mentioned earlier, Shivaji’s father Shahaji who was a noble in Sultan’s court had to send Shivaji and his mother to their Jahagir on the Mughal border.

Surprisingly, despite the great victory at Bijapur, Shivaji somehow looked sad and thoughtful. He gave some excuses and immediately left Bijapur to Raigad. The historian writes that Shivaji must have become contemplative wondering at this strange reversal of fate — A neglected child becomes a rebel, now a life-long enemy like Bijapur welcoming him with servile adulation. Probably, these events must have made Shivaji more than ever conscious of the impermanence of everything, the change, the ending.

READ ALSO  Life of a Doctor, his Death and a Book

When Shivaji returned to his capital, his family and friends noticed a change in his demeanour and interaction with them. He appeared talking rather abnormally. He was suffering from increasing melancholy day by day so much so he wrote a letter to spiritual Guru Ramdas saying, “It would be good if God called me to his feet. I cannot bear being separated from my mother any longer.” It was a clear foreboding of his approaching death. There was a swelling on his knee which made walking very painful. Therefore, he was bed-ridden.

And soon he fell into a high fever. By April 3, 1680, he was in his death-bed. He asked those around him not to weep because their religion promised immortality. After one Brahman, who is known as the scapegoat for the purpose, absolved Shivaji and freed him from the burden of all his sins, except of adultery and murder, as per Hindu rituals, Shivaji breathed his last. The famous Bhavani Sword of Shivaji was taken from him and placed in the temple of the mother Goddess at Satara in Maharashtra where people say it could be seen even today.

When the news reached Delhi, Aurangzeb’s face lit up with joy. And yet spontaneously, he paid him a tribute in the following words as recorded by Historian Orme. Aurangzeb said, “Shivaji was a great captain and the only one who had the magnanimity to raise a new Kingdom. My armies were employed against him for 19 years. Nevertheless his territories have always been increasing.”

In contrast, a Mughal Historian Khafi Khan had expressed happiness exclaiming “the infidel has gone to hell.”

Interestingly, the English merchants in Surat and Bombay took a long time to be convinced that Shivaji could really be dead. Even eight months after his death, the English in Bombay were writing ‘Shivaji had died’ so often that some had begun thinking him to be immortal!

While describing in detail the funeral of Shivaji, the author writes, “under the tongue that had so often charmed, encouraged and inspired, they had placed a single emerald.” It was the month of April, a very hot summer, his body was carried in a great palanquin of State as per Hindu ritual and laid on the pyre with the head towards the north. It was already evening and the stars were coming out. Shivaji was aged 50 when he died. Some say he was 52.