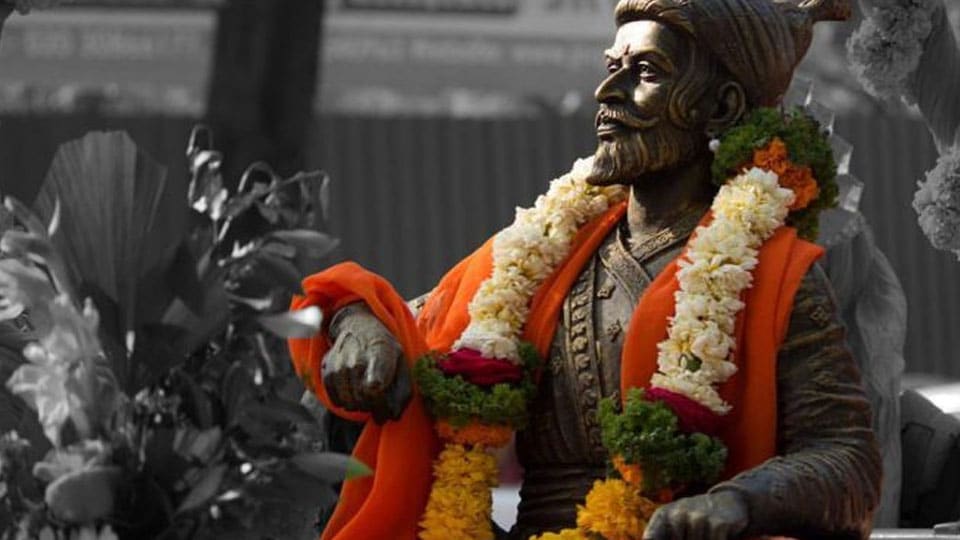 Coronation of Shivaji in June 1674

So it was that the coronation was celebrated at Raigad in June 1674. A massive grand, opulent and  spectacular preparation was made for a month-long celebration. The coronation ceremony was performed by the greatest of the Brahman Ganga Bhat from Banaras known to be the most sacred city of India, the eternal city.

In the book written by Dennis Kincaid, I was not able to find a single name of those VIP guests who attended from among the Hindu Princes or the Mughal representatives or from the Sultanates. However, he writes “By a curious chance an embassy (representative) from a people with red faces was seen going to Shivaji’s court, an English deputation from Bombay.”

This, I guess, has always been the English genius of diplomacy. No wonder in the next century and after it was British who nudged all other foreign powers in India, first the Mughals, then the Europeans and the remnant of Maratha power and themselves became the rulers!

Be that as it may, the book mentions of Shivaji’s food preferences while contrasting it to the huge appetite of the English who ate goat meat in huge quantities. According to the author, Shivaji himself had only one meal a day and that was only Kachori, a sort of pulse and rice mixed together and cooked in butter.

At one point of the prolonged coronation ceremony, Shivaji’s mother Jijabai aged over 80 years was brought before the happening place of the ceremony in a litter, a cushioned seat carried by men. Shivaji got down from his seat and prostrated himself in obeisance at her feet while she blessed him by placing her hand on his head.

Then began further ceremonies for three days. It is best for me to quote the author at this point and leave it to our readers the role of the Brahman Ganga Bhat in preparing a non-Brahman Shivaji to wear the crown as a Hindu King.

“Now in imitation of Mughal royalty Shivaji was weighed against precious metals and jewels, spices and wine and fruits and brocades all of which were distributed to Brahmans.”

It was on June 6th 1674 the rites of the coronation proper began. Shivaji entered the great hall of the Palace with his queen-consort Soyra beside him, their robes being knotted together and behind them came Shivaji’s mother and son Sambhaji followed by his eight Ministers. He approached his throne with a canopy of a gold cloth from which pearls hung in festoons. He mounted the throne to the booming of the guns in the city. Sixteen Brahman women advanced towards Shivaji and performed arati with burning lamps for good omen.

His crown made of flowers were removed and in its place he put on a turban hung with tassels of jewels. The Pontiff Ganga Bhat immediately raised above his head the pearl-studded gold umbrella of imperial sovereignty. Immediately, the soldiers clashed their shields on the spears held by them even as the crowds cheered aloud victory for their King-Emperor.

Thereafter, Shivaji, the new Emperor, descended from his throne, walked across the hall and mounted a caparisoned elephant of the State and went in procession on the main thoroughfares of his capital Raigad.

Soon after the coronation, the season of monsoon set in and it began to rain. Everything looked good for Shivaji’s mother Jijabai who had lived to see her son, whom she had brought up in loneliness and poverty, as already mentioned in the earlier articles, crowned as a Hindu King in the midst of Muslim rulers all around.

It seemed to Jijabai as though she had nothing further from life to desire. But a few days after Shivaji’s coronation, Jijabai fell ill and she realised she was nearing her end. As a woman of great prudence and experience, she ordered that all her personal goods and possessions be distributed to poor. On the fifth day of her illness, she died. Needless to say his mother’s death was a great blow to him.

For two years after his coronation, Shivaji as an Emperor (Chhatrapati) had a peaceful life without any military or administrative activities. Then in 1676, Shivaji fell seriously ill but soon recovered with a changed attitude towards life. To the shock and surprise of everybody, he declared his intention of abdicating the throne and leading a spiritual life as a religious mendicant. Though he was dissuaded from taking this unexpected and disastrous step, nevertheless he would disappear from his palace and wander alone in the forest and sit in meditation near a pool or under a giant tree.

Back in the palace, he gave up sleeping on the soft royal bed and preferred to sleep on a peasant’s bed made of wood and string. His first wife had already died and her son, the heir-apparent to the throne, Sambhaji, was growing up, unfortunately into a reckless man. Shivaji was not able to get him under control. It may be mentioned that he was the one who accompanied Shivaji to Delhi to Aurangzeb’s Court. He was looked after by his second wife, queen-consort Soyra, who wished to have her own son Rajaram to inherit the throne.

Therefore, a palace intrigue was set in motion which further disturbed Shivaji who wanted his eldest son Sambhaji to ascend the throne.

At the end of 1676, Shivaji recovered fully from his illness and also from his illusion of becoming an ascetic. He appeared to have regained his youthful vigour and decided to go on a last and greatest campaign to expand his Kingdom further, into the South West corner of India.

It was a time when Aurangzeb, because of his increasing religious bigotry, had alienated all his Rajput officers including Jaswanth Singh, who was the Governor of Deccan. According to historian Dennis Kincaid, Raja Jaswanth Singh, who died in 1678 (two years before Shivaji’s death in 1680) had dictated in his death bed a letter to the Emperor Aurangzeb in which he said, “God is the God of all mankind, not the God of Mohammedans alone. To vilify the religion or customs of other men is to set at naught the pleasure of the Almighty.”

Shivaji realised that Mughal armies in the Deccan acted mostly on the defensive even after hearing of Shivaji’s proposed campaign along the Southern provinces. To neutralise the Mughal army while he went on his Southern campaign, Shivaji secretly sent a huge bribe to the Mughal Command-in-Chief. Then Shivaji set out from Raigad at the beginning of the new year with 70,000 men.

First, he crossed Bijapur Territory without resistance and arrived at the borders of Golkonda, the richest kingdom ruled by a member of the Persian Qutabshahi dynasty by name Abuhussein, owing allegiance to the Mughal Emperor by paying heavy tribute. Golkonda was known for its diamond mines and gems. It also held the monopoly of alcohol especially the palm liquor, toddy. Another source of income was the brothels, more numerous than in any other Indian city. The brothels were also the distributing centre of toddy for obvious reasons thus increasing the sale of liquor and contributing to the State’s revenue.

After negotiation, the Golkonda Sultan agreed to pay tribute to Shivaji. After staying as Sultan’s guest for a few days, Shivaji continued his campaign and began to capture many forts on the way like Ananthpur, Jinji near Vellore which was fought and won from the Mughal army administered by Bijapur officer. Marching forward, he captured Vellore Fort after giving a fight and thereafter went to Thanjavur which was ruled by Shivaji’s step-brother, son of Shivaji’s father Shahji’s another wife Tukabai.

According to one version, from Golkonda, Shivaji asked his army to march towards the Karnatak border. Crossing the Krishna river, Shivaji, to everybody’s surprise, asked his Army Generals to continue the march towards South. He, however, slipped away from the army and accompanied only by Hanumante, the successful Brahman envoy to Golkonda, he visited the famous temple of God Shiva at Srisaila.

For ten days, he remained in the temple fasting and in constant prayer. It was Hanumante who persuaded him to leave the temple and join his soldiers who would be leaderless without him. At last, he rejoined his army in Ananthpur. From here he headed towards Thanjavur  which was ruled by Shivaji’s half-brother Venkoji representing Bijapur Sultan. Afraid of Shivaji’s arrival with a huge army, Venkoji timidly offered to negotiate. Being used to negotiation, Shivaji too invited him to his camp. However, Shivaji, suspecting his half-brother’s good faith, demanded that five members of his delegation be given to Shivaji as hostages.

Venkoji was angry and defiant of Shivaji’s proposal. After a week of bargaining, Venkoji escaped by night from his brother’s camp and begged other Sultans for help, including the great Mughal. Shivaji could have kept five hostages with him but he was kind to these trembling hostages and sent them away with presents and robes of honour.

After nearly a year in hiding, Venkoji finally surrendered to Shivaji. Shivaji, however, gave his step-brother the town of Thanjavur and some lands but he was to be under the supervision of Shivaji’s Ministers and the Brahman Hanumante, who in fact became the real ruler of Thanjavur.

As for Venkoji, totally depressed by this disgrace, he adopted the life of a religious mendicant. By 1678, Shivaji had not only conquered Karnatak but also Mysore and beyond, leaving behind a large army in charge of his Generals and returned to his capital Raigad with an enormous amount of plunder. The time taken for this apparently effortless military operations by Shivaji was just 18 months.