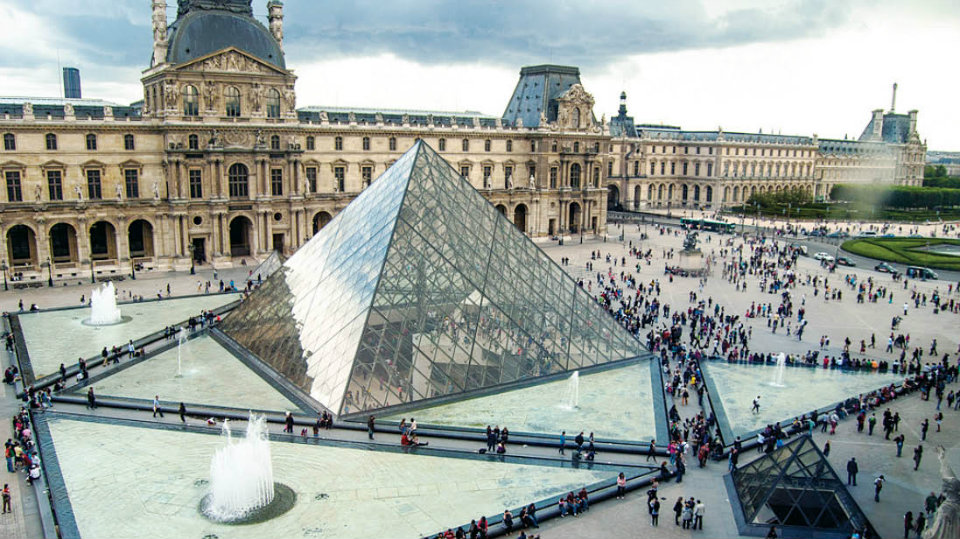 Last Friday I happened to read about the way the British remembered the 500th death anniversary of the renaissance artist and also a scientist Leonardo da Vinci. Primarily he is known to the world as the person who painted the Mona Lisa, the woman with a sphinx-like mysterious, subtle and eternal smile on her face. Of course, there are so many other paintings like The Last Supper, The Vitruvian Man to name a few. A possible self-portrait done in the years before he came to Rome in 1513 often defines our image of Leonardo.

I also remembered my visit to Paris in December 2016 for a week’s stay when I spent two full days visiting the Louvre Museum where Leonardo’s original masterpieces, including Mona Lisa, are kept. I had written about this memorable visit in this column on my return. The crowd of visitors at the special enclosure where Mona Lisa’s modest-sized painting hangs is to be seen to be believed [see pic]. I was unable to move close to the portrait because of the jostling crowd but succeeded after a while.

I had forgotten about Leonardo da Vinci after I read a book titled The Da Vinci Code which was a huge best-seller written by Dan Brown. I also saw the film made based on this story which was an apology and even a disaster when compared to the book with a roller-coaster narration making it unputdownable. Thereafter, I remembered Leonardo da Vinci only when I went to Louvre Museum in Paris.

Life never seems to disappoint those who evince interest in some subject. I had evinced interest in Leonardo da Vinci for sheer genius of his that I had read in books, essays and personal visit to Louvre where I saw his masterpieces. That being so, I was as much surprised as I was thrilled to receive a biography on Leonardo da Vinci by Walter Isaacson from my friend Krishna Prasad, former Editor of Outlook magazine, with a note reading, “For Mr. Ganapathy, the Renaissance Man of Mysore. For a fantastic 77 and to many more.” Thank you Prasad, but I must confess I have read only a few pages of this tome of a book (523+ pages) and I promise that I would read it from time to time like it happened this time.

It is said, Leonardo’s fantasies pervaded everything it touched. He was as much a man of art as well as of science and engineering. No wonder Leonardo had put “Describe the tongue of the Woodpecker” in one of his notes of to-do-list! The bird has a unique tongue that extends more than three times its bill and   protects its brain while digging into tree! Hence his interest. Otherwise how could he produce dramas and plans to divert rivers (we are still struggling to inter-link rivers in our country). He designed ideal cities and even flying machines. His military engineering skills could not be put into reality for want of a patron.

The author of the biography says that, his inspiration, the starting point, for writing the biography was not Leonardo’s art masterpieces but his notebooks. And to learn that his notes and scribbles ran into 7,200 pages is certainly mind-boggling for a person who died at the age of 67 in the year 1519. It is not surprising, therefore, the genius behind the world’s No. 1 cellphone Apple, Steve Jobs, considered Leonardo da Vinci as his hero.

And this is how Steve Jobs defined and described the person Leonardo da Vinci: “He saw beauty in both art and engineering and his ability to combine them was what made him a  genius.”

This reminds me  of a saying relating to our architects, most of whom are leaving behind just massive ugly unaesthetic concrete structures. A real good architect is one who understands and feels the location of his creation and then builds like a Titan but finishes his creation like a Jeweller with  meticulous care and an eye for beauty. Let it be.

While anyone would say that it is a curse to be born a bastard, the biographer Walter Isaacson has a different opinion. Curiously the very first sentence of the first chapter of the book says it all. He writes: “Leonardo da Vinci had the good luck to be born out of wedlock.”

If he was born as a legitimate son in his family he would have become a humble or a failed notary (lawyer) which was their profession for nearly five generations. He was born in a town known as Vinci about 17 miles from Florence. The name Leonardo da Vinci means the person Leonardo hailing ‘from Vinci.’ Therefore, to call Leonardo merely as ‘da vinci’ is incorrect.

Be that as it may, he was lucky to have been sired by a rich man Piero who was a notary to so many monasteries, religious orders, the town’s Jewish community, and once to Medici royal family.

It was during one of his visits to Vinci on business Piero had a relationship with an unmarried local peasant girl and they had a son and this birth was recorded by his grandfather as the son of Ser Piero and also mentioned the name of the child — Leonardo. It is said that Leonardo’s mother was not considered worth mentioning in the birth or baptism record. However, it is learnt that her first name was Caterina and her identity was a mystery. Some researchers had speculated that she was an Arab slave or perhaps a Chinese slave. Interestingly, after Leonardo was born, his father Piero got Caterina married to a local farmer who had known the da Vinci family.

READ ALSO  With love from Donald Trump to India and Narendra Modi !

Reading this, I was reminded of the coachman of Leo Tolstoy, the Russian literary giant and a Pacifist, who wrote the monumental War and Peace and many other literary masterpieces. It seems, like in the present day where it is difficult to get a good or an ideal driver (remember the White Tiger’ a Booker Prize-winning novel written by Aravind Adiga?) so it was in those days of Leo Tolstoy, a rich aristocrat. So he got his illegitimate son as his coachman ! Where will he go?

Illegitimate child is generally known as ‘Love Child.’ Leonardo did not leave any comment in his famous, voluminous record of “notebook” about his circumstances of birth. But, according to the biography, there was one tantalising allusion to it suggesting favours that nature bestows upon a ‘Love Child.’ Leonardo notes: “The man who has intercourse aggressively and uneasily will produce children who are irritable and untrustworthy, but if the intercourse is done with great love and desire on both sides, the child will be of great intellect, witty, lively and lovable.”

Reading this we must assume or at least hope that Leonardo considered himself in the latter category. Probably, as one historian said the Renaissance Italy was “the golden age of bastards.”

Well, if it was so, so be it. Otherwise, how and where would you get a creative genius like Leonardo. And history tells us many Dukes and Princes used to be born out of wedlock. Why?, Pope Pius II himself fathered at least two illegitimate children! He was the Pope during Leonardo’s time. So also Pope Alexander VI, during Leonardo’s lifetime, had multiple mistresses and naturally illegitimate children. And one among them became famous, like Leonardo, in a different field. He became a Cardinal, Commander of the Papal Army, more importantly, an employer of Leonardo and the subject of Machiavelli’s, world famous guide to cunning and crooked politicians The Prince.

Well, at the end we can only conclude that Leonardo da Vinci was a child of his age and a child of destiny. His legacy will last beyond 500 years as long as human race survives on this planet earth. Amen.