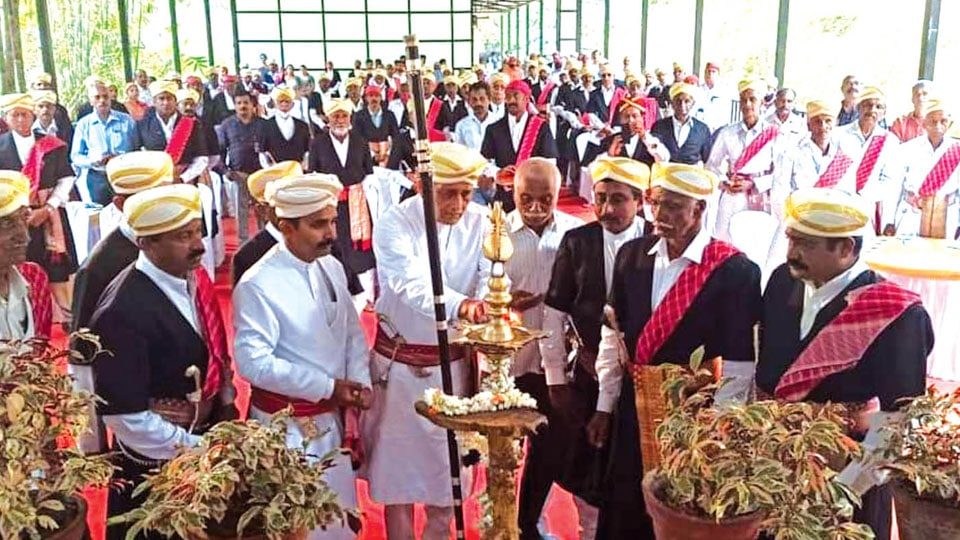 The Kodavas were originally worshippers of ancestors and of nature. A Kodava joint family was called an Okka. The members of such a family owned and tilled their farmland in common. A group of these families formed a hamlet called a Keri. A few such hamlets formed a village called an Oor. Each village would have one or more temples. A number of such villages formed a cluster called a Naad. A number of such clusters formed a region called a Shime. Kodagu comprised 8 regions or 35 clusters.

There was a traditional system of leadership in Kodagu called Thakkame. Accordingly, every village, cluster, region and temple was led by a prominent Okka called a Thakka family. This family was responsible for guiding the people in the affairs of and in settling disputes within their jurisdiction. Generally, every family (whether Thakka or not) was presided over by its head who was usually the eldest, able male member called a Pattedara. A Thakka family was hence represented by its respective head.

The Shime Thakka and Naad Thakka families are named in a century-old compilation of Kodava folklore called the Pattole Palame. The Shime Thakkas were sometimes called Desa Thakkas. Some of the Naads had more than one Naad Thakka. Every village in Kodagu had an Oor Thakka and every Devasthana (temple) had a Deva Thakka. Therefore, the Thakkas were hereditary managers who helped run the various local societies in Kodagu.  The Thakkas would frequently gather in an Ambala, a roofed hall on a raised platform. A meeting of the Thakkas was called a Thakkorme. In the modern era, with the march of western civilisation, these concepts have been largely forgotten.

A few temples outside Kodagu and frequented by Kodavas also have Deva Thakkas. They served as temple managers especially during the annual festival days. For example, there is the Puggera family at the Baithurappa temple and the Mundiolanda and Bovverianda families at the Payyavoorappa temple.

A Kodava Trust called United Kodava Organisation (UKO) has now been putting in efforts to revive the Thakkorme practise. On Dec. 25, 2020, UKO held a Thakkorme event at Begur village. Kokkalemada Manju Chinnappa, President and Convener of UKO, spoke on the occasion, enlightening the crowd about the ancient practise. Mathanda Monnappa, President of Akhila Kodava Samaja and a present-day Desa Thakka, was also present.

According to UKO President, over 85 Thakkas participated in the event. He said that a Thakka is a religious head and an Oorme is a unity. Hence, Thakkorme is a confluence of religious heads. During the ancestral era, the Kodava clan system was led by these leaders. Urbanisation and politics had affected the system and have a negative effect on the community.

Currently, these spiritual leaders who also head the administrative system of the villages, are losing their hold. The revival of this religious head culture is now being planned by UKO. The 2020 event was held with the purpose of uniting the religious heads so as to empower them to protect the cultural heritage of the Kodava community. Hence, UKO has started an initiative to promote and revive these clan system rituals in their recently organised religious heads’ meet.

In 2015, UKO had organised a padayatra (foot march) from Talacauvery to Bengaluru. Every year they organise the Mand Namme (festival of village greens). The Mand is a village meadow with a sap tree. The dances and sports organised during annual festivals such as the festival of arms Kail Poldh and the harvest festival Puthari are held here. Sometimes disputes are settled in the Mand. This year (2021), the UKO Mand Namme is being held on Jan. 12 at Ammathi-Ontiangadi.

“In order to strengthen our religious system, we need to empower our Thakka culture. We need to revive the Thakka rituals and follow the associated rules strictly. In this manner we can preserve and protect the heritage of our Kodava community,” said Manju Chinnappa, during the Thakkorme meeting.

Just as how the spiritual leaders in various religious mutts are trained, we need to train the thakkas so that they can effectively guide our community. Through these thakkorme programmes, UKO will provide training to the present and the future generations of thakkas. We have to strengthen the thakka culture to ensure that our religious system remains strong.