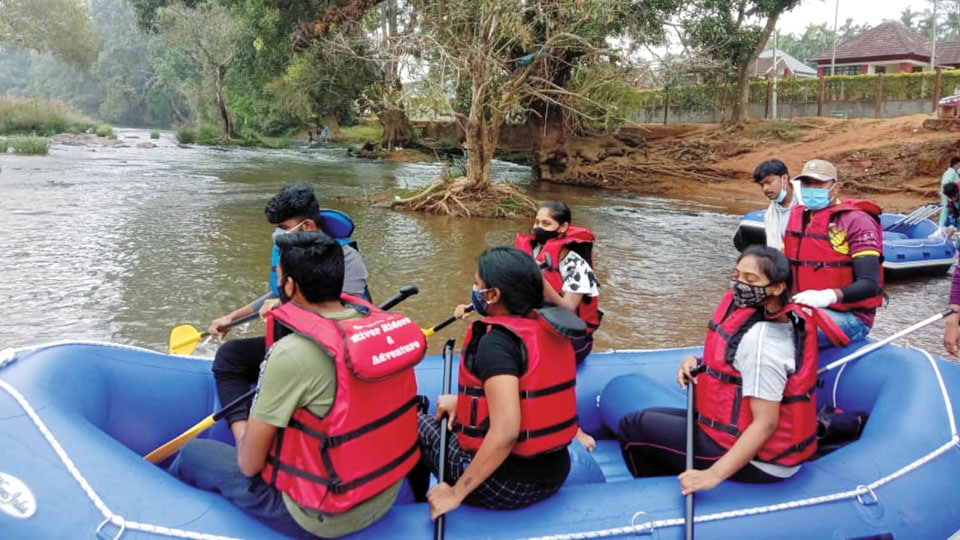 Kushalnagar: River rafting, a popular activity among tourists coming to Dubare near Kushalnagar in Kodagu, has resumed after a long break. This comes in the wake of Deputy Commissioner Annies Kanmani Joy permitting operators to resume rafting after stringently following COVID precautions.

The activity began on Dec. 12 with six boats that are carrying six persons each and a guide into the river. These six boats have been permitted as of now as they have already renewed their licences. There are 34 rafting boats in Dubare and the remaining boats will be operational by 15 days after they renew their licences.

Rafting had been suspended in March after the outbreak of COVID-19. A few days ago, Kodagu DC held a meeting with rafters and permitted them to resume rafting with precautions. Rafting owners had been desperately waiting for the business to reopen.

Rafting usually starts once the inflow into the Cauvery River increases and the level rises. A raft is a rubberised, inflatable boat where rafters have to row. These are not mechanised rafts as they are not allowed in the river.

As one hits the rapids (a section of the river where the water moves very fast particularly over or bisecting the rocks), there is a rush of adrenalin as the boat sways to the sheer force of the water. The thrill, however, is not without a certain amount of risk though the rafters wear enough gadgets, including life jackets.

June to November is the ‘whitewater’ season and November to June is ‘stillwater’ season. Whitewater is formed in a rapid, when a river’s gradient changes enough to generate so much turbulence that air is trapped within the water. This forms an unstable current that froths, making the water appear opaque and white. Stillwater is  part of a stream where no water current is visible.

READ ALSO  No vaccination in Private Hospitals from tomorrow

The present ‘stillwater’ rafting activity is a ride for one-and-a-half kilometres and Rs. 200 is charged per person. It is a 30 to 40-minute ride and if the number of tourists is less, the activity can go up to one hour. As per the COVID protocol, wearing of masks and social distancing is mandatory. The lifejackets worn by rafters are disinfected after each use and are dried under the sun. Even boats are disinfected after each trip.

Speaking to Star of Mysore, C.L. Vishwa, President of Dubare Rafters Association, said that they were under severe losses since March as rafting was not permitted even after lockdown. “Many guides and people who were dependent on this trade had switched to manual labour in coffee estates to earn a living. We have got a new lease of life and we will follow all the guidelines,” said Manish, the Rafting Guides Association President.

As per rules, water rafting now starts at a common point. Earlier, rafting was being held at multiple points and thus was difficult to monitor. Operators must secure permission from the Departments of Police, Forests, Fire Force and Tourism, local Panchayat and Pollution Control Board. They need to possess fitness certificate for their rafts.

Operators have to employ trained guards to accompany the rafters. Every one of them should have identity cards issued by the Department of Tourism and should be trained in first-aid methods. Smoking and drinking is prohibited during rafting. The rafters should also obtain permission from the Karnataka Inland Water Transport Department.

Though rafting in Dubare was quite popular, it was banned by the Kodagu district administration in February 2018. It was re-started in July 2019. In 2018, the Kodagu DC had banned rafting after a tourist from Hyderabad got into an argument with an organiser and was killed in the ensuing altercation.