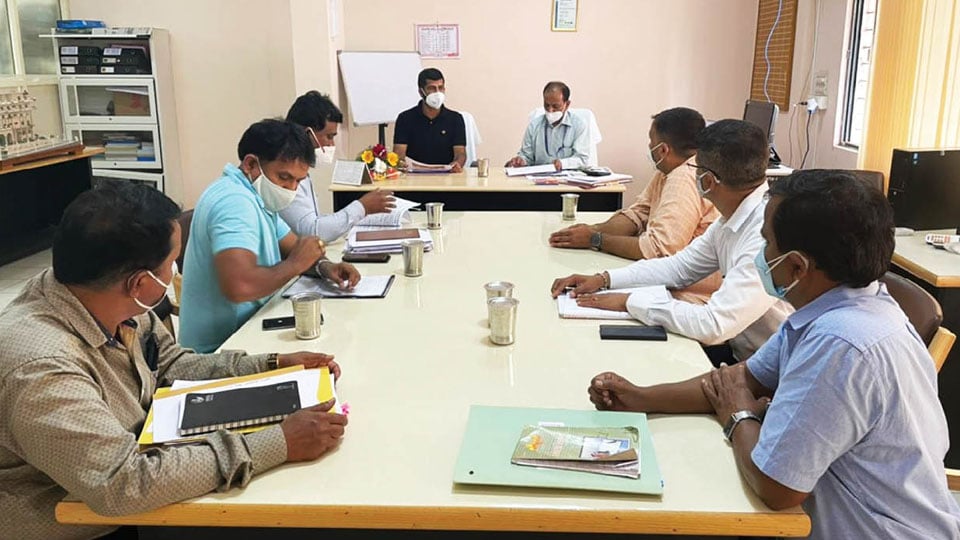 Funds will not be an impediment, assures MP Pratap Simha

Mysore/Mysuru: Funds will not be a shortage for the ambitious Rs. 545 crore Hale Unduwadi Drinking Water Project aimed at supplying drinking water to Mysuru City and 92 villages around it. The project has already been initiated and funds will be released from time to time, Mysuru-Kodagu MP Pratap Simha has told Water Board officials.

Holding a meeting with the officers at the Water Board Chief Engineer’s Office in city on Thursday, the MP reviewed the progress of the project and also obtained information from the officials on the next set of works to be undertaken.

Tenders for the project were floated in December 2020 and the first phase of the project is being taken up at an estimated cost of Rs. 350 crore. Once the project is implemented, the city and its neighbouring villages will get 300 Million Litres per Day (MLD) water from River Cauvery. This would be in addition to 250 MLD being supplied to the city at present. This project will get Cauvery water from Krishna Raja Sagar (KRS) Dam backwaters instead of the present practice of lifting water from the Canals and it is one of the biggest drinking water supply projects in South India. A majority of the areas covered under the project is located in Chamundeshwari Assembly Constituency.

Pratap Simha told the officials that the project was initiated by Chamundeshwari MLA G.T. Devegowda and when H.D. Kumaraswamy was the CM, Rs. 350 crore has been allocated to the project with works beginning under the present BJP dispensation. “The actual cost of the project is Rs. 545 crore and Rs. 350 crore has been set aside. Funds will not be a problem for this project which benefits a large population and money will be released from time to time,” the MP told Water Board Chief Engineer Siddanayak and other officers.

Later speaking to Star of Mysore, the MP said that the project will supply 24×7 water to the entire Mysuru city — along with the existing water supply system — and also outskirts. “The Hale Unduwadi project was launched in 2012 and Rs. 545 crore was estimated. Later, the tenders were called for a limited Rs. 350 crore. It is difficult to implement such a mega project with limited resources,” he said.

“MUDA has sanctioned 90 acres of land at Beechanakuppe and water will be drawn through gravity. The project entails construction of a Water Treatment Plant at Beechanakuppe, a jackwell to pump water from there and money is required to lay Canals and pipelines to supply water to various balancing reservoirs. I have told the officers to go ahead with the works as the release of funds will be unhindered,” Simha said.

The ambitious project will be implemented in its original form where all the earlier proposed project additions would be implemented, he said and added that if required, more money would be brought from the Government. “The aim is to provide perennial water to Mysuru city and also to the villages surrounding the city. This project would fulfil the needs of people in Mysuru city, parts of Hunsur, Srirangapatna taluk in Mandya district and it is my responsibility to get more money for the project in case of requirement,” he said.