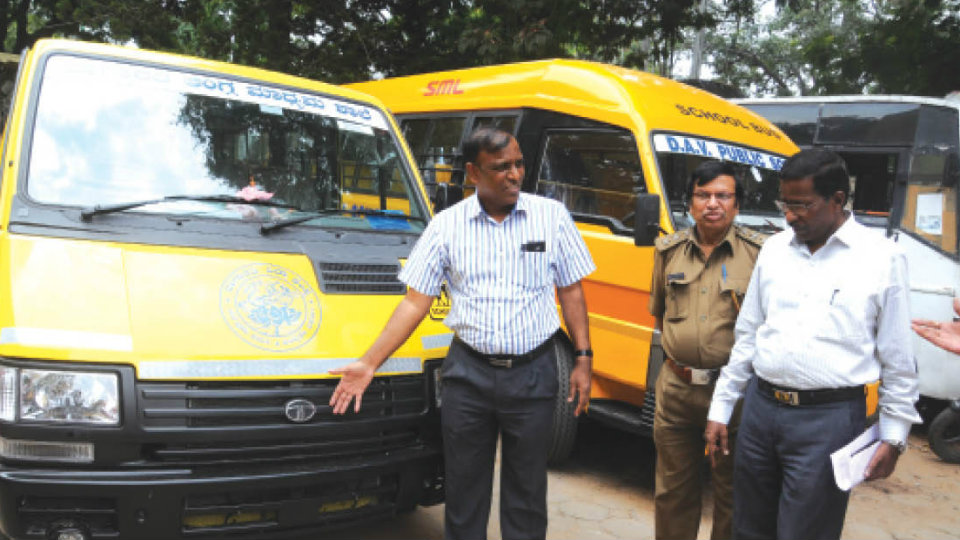 Mysuru: The Officers of the RTO West, consisting of three senior Motor Inspectors and one Motor Inspector, began checking of the Private School vehicles carrying school children at 8.30 am today and seized two vehicles near Bandipalya which did not have number plates. Two cases were booked against vehicles, one near RTO West office and another near Columbia Asia Hospital for violating Motor Vehicles Act.

In all, cases were booked against four vehicles. Deputy Commissioner and senior RTO (West) M. Prabhuswamy, speaking to Star of Mysore here this morning, said that the school vehicles should be maintained in good condition, all the documents must be in order including Fitness Certificate, the windows should have rods, there should be an emergency exit and most importantly experienced drivers must handle the vehicles.

It may be recalled that the RTO had given 15 days time to set right the problems if any. It had also conducted an awareness programme on June 14 for private school vehicle drivers, attenders and school managements at Maharaja’s College Grounds. In the light of this, the checking drive has begun keeping the safety of school children in mind, he said.

Meanwhile, welcoming the move by the Transport Department, S. Manohar, Managing Trustee of SVG’s Vishwaprajna Composite PU College in city, told SOM that the RTO has taken a decision keeping the safety of young lives in their mind and added that if every school maintains vehicles, parents will have confidence in sending their children in school vehicles. He said that they have maintained their vehicles as per the standards given by the Transport Department.

Manjunath Srivatsa, Secretary of Sri Sharada Public School, Mysuru, who too welcomed the decision, said that this rule should not be limited only to school vehicles but should be extended to all vehicles which are ferrying the students to school and back. He further said that their vehicles have been installed with CCTV cameras, GPS, speed governor etc. and opined that the same should apply to all vehicles.

Dr. Ravindraswamy Dodmane, Vice-President of CBSE, ICSE and Private School Association, Mysuru, who is also the Founder-Chairman of Supreme Institutions, Mysuru, said that all their vehicles are maintained properly as per the guidelines issued by the RTO and added that the Transport Department has taken a good move keeping the safety of school children in mind.