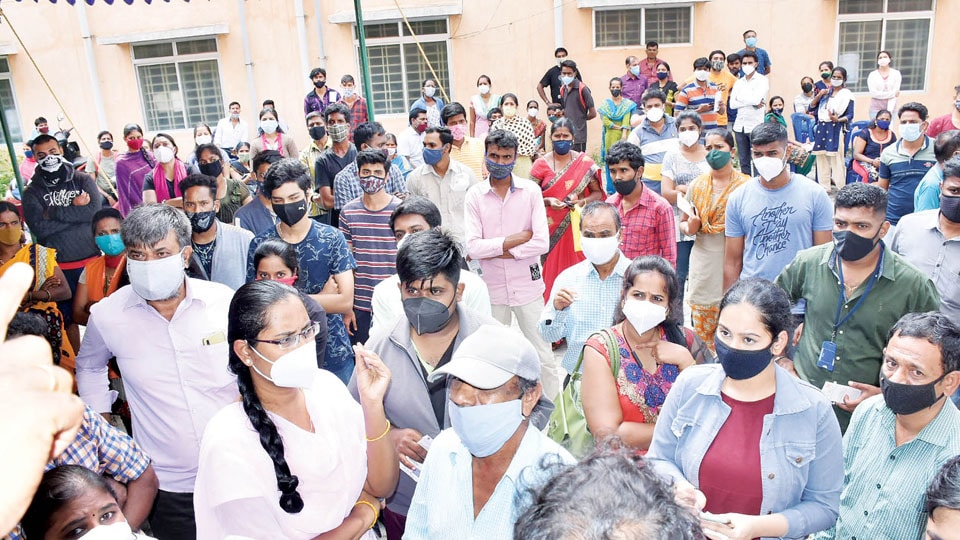 Mysore/Mysuru: Vaccinating the entire population in city will be a massive challenge given the present scenario prevalent at most of the vaccination centres. The supply shortage, however, has not been the only challenge as there are other issues too like planning, infrastructure, social bias and the divide between the rich and the poor.

While rich people will be vaccinated before poor people as they have easy access to different vaccine centres, thanks to their proximity with political party leaders, local politicians and also Ward-level committee members. On the other hand, the poor have to queue up in front of Primary Health Centres (PHCs) where vaccines are supplied in limited quantities. Even today ‘No Stock’ boards were displayed at many PHCs.

Special drives are being held at various points in city at Chamaraja, Krishnaraja and Narasimharaja Constituencies and a major portion of the vaccines that arrive as city quota are being allotted to these special drive centres based on the clout the MLA has over the Health Department. At many PHCs like Agrahara PHC and Vidyaranyapuram PHC ‘No Stock’ boards were displayed as early as 10.30 am today as only 100 vials were supplied there.

Several people who had come to take the jabs were turned away and some of them expressed displeasure over the exclusive supply of vaccines only for special drives instead of an equitable distribution to all vaccination booths. “There are ample vaccines only on paper but in the ground level there is a severe shortage. This is nothing but a gimmick,” said Krishnaveni who had to go back home from the Agrahara PHC.

The special drive organised at BGS School in Ward 64 and Chaitra PU College Srirampura (Ward 65) got good response from residents as they lined up before the booths. Here too, later, only frontline workers were given preference and people in the 18-44 age group were asked to come another day. Vaccines — both first dose and second dose of Covishield and Covaxin — were administered to people above 45 years.

Interestingly, the rich and all those who can easily afford paying for vaccines at Private Hospitals too are making a beeline in front of free vaccination centres increasing the footfall and the crowds. Private Hospitals, however, are reporting moderate vaccine entries. “We cannot tell the rich and the influential not to come here. But if they can spend Rs. 1,500 for a single meal, they can easily get vaccinated by paying money instead of causing rush here,” a volunteer manning a vaccine centre told Star of Mysore.

At some vaccination booths, fruits and juice packets were distributed to all those people who are involved in providing vaccinations. Notably, the packets had the face of the area MLA on them. After distributing the fruits and juice, volunteers went inside the booths to get their jabs. Twin purpose is served here — fruits distribution and also vaccination.

The Charaka Government Ayurveda Post Graduation Centre on KRS Road has stood out for systematic and efficient handling in the free vaccination process ever since the vaccination drive began in city since April last week. Several people who have taken jabs here without any hassle have lauded the efforts of the Hospital authorities.

The Hospital, located in Brindavan Layout on KRS Road, is one of the major vaccination centres doling out the jabs in a well organised way where more than 1,000 people are being vaccinated every day. Now even after the Hospital was open for vaccinating 18-44 age groups, the rush is managed by a set of PG students, doctors and Red Cross Society volunteers.

A token system is adopted here where after the tokens are distributed, announcements are made through loud speakers so that the vaccine beneficiary comes to the booth to take the jabs. The centre functions under Nodal Officer Dr. Mudassir Azeez Khan and Dr. Anusha Vas. Apart from them, Manjunath and Guru S. Gowda from Red Cross and a team of 10 nurses and nine Red Cross volunteers are managing the show.

There is ample space for parking on the road and also near a park at the Hospital and two Police constables have been deputed here from V.V. Puram Police Station to man the traffic and rush. Separate queues have been designated for those in the age group of 18 to 44 and those above 45 years of age.

This morning, over 30 haemophilia patients were vaccinated at Charaka Hospital and the drive was organised in association with Mysuru Haemophilia Association. It is important that haemophilia treatment centres, in close collaboration with patient organisations, take action to inform people with bleeding disorders about the COVID-19 vaccines and contribute to an effective vaccination programme, say the guidelines.

For patients with severe/moderate haemophilia, the COVID injection should be given after a factor VIII (FVIII) or factor IX (FIX) injection, according to guidance from Haemophilia Associations. At Charaka vaccination centre, procedures were followed as per guidelines and after the factor VIII (FVIII) or factor IX (FIX) shots they were kept under observation for 15 minutes for any adverse reactions. Only then vaccines were administered.