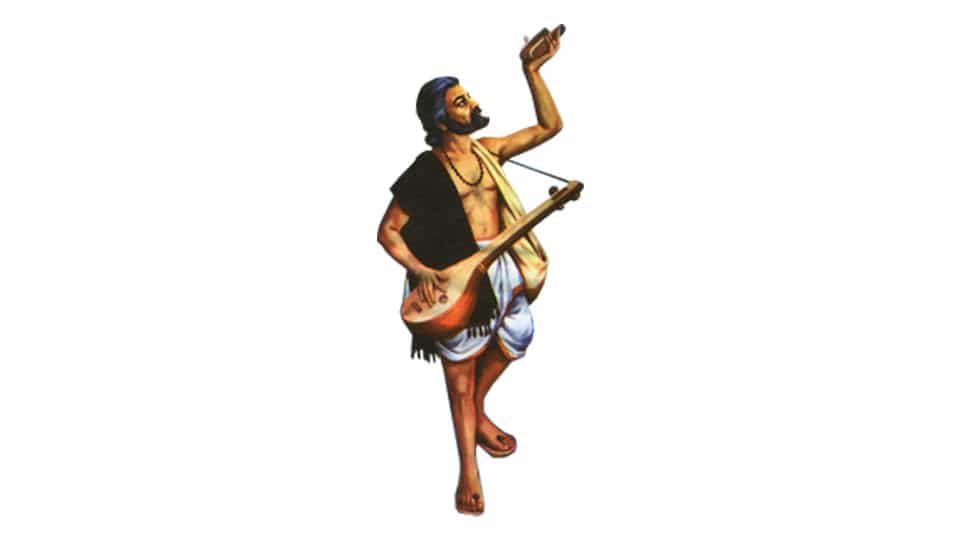 South India in general and Karnataka in particular abounds in contemporary or near contemporary saints who are still a religious force. Recently (6.11.2017) the birth anniversary of Saint Kanakadasa was celebrated with religious fervour in many parts of Karnataka which is making a great impact on our society.

Fortunately, authentic details of Kanakadasa are known to us from literary works and also from oral tradition. He is known to have lived and worked from 1508 to 1606 AD. Kanakadasa is said to have belonged to the Beda tribe. These people are known to have belonged to the tribe of Dasas who lived in Kaginele belonging to Dharwad district. Further some scholars believe that Kanakadasa was a contemporary of Purandaradasa. There is also an opinion that he belonged to the religious order of Sri Ramanuja. The supporters of this opinion find evidence from the work of Mohana Tarangini in which he has praised Sri Ramanujacharya as well as Tatacharya.

Some other scholars have felt that he is a shepherd (Kuruba). However, many scholars feel that he belonged to Nayaka community. He has praised God Biredeva and this is also worthy of notice. Anyway, all these point out that he belonged to a lower strata of society and such a person became a saint of great eminence. This shows that there were opportunities for lower caste persons or of lower strata to become saints and get respect in the society.

There is also another opinion according to which these people ruled in a place called Bada in Dharwad district and they fought in a small battle but were defeated. They lost all their relatives and became desperate. But their faith in God was such that they could get over the difficulties and this strengthened their faith in Sri Hari.

These persons became devotees of Sri Hari (Haridasa). They thought that whatever devotion they had practiced should be made known to other people in the society so that they should also see divinity in the form of Vishnu or Hari. Hence, Kanakadasa began a religious tour of nearby areas which included Tirupati, Hampi, Belur and, of course, Udupi. Adikeshava of Kaginele became his tutelary deity. It seems he had other names like Thimmappa and Kanaka Nayaka. However, he became famous as Kanakadasa. He is said to have performed many miracles to show to the world the supremacy of Sri Hari. The famous of them is the Kanakana Kindi, an opening in Udupi. As he belonged to a lower caste, the people of upper caste did not allow him to enter the Krishna temple to have darshan of Lord Krishna. The God who had realised that Kanaka is his real devotee gave darshan to him through a small opening, now famous as Kanakana Kindi.

Apart from all these spiritual accomplishments, Kanakadasa was the author of many devotional spiritual songs as well as works like Mohana Tarangini, Nala Charitre, Haribhaktisara, Narasimhastava and Ramadhanya Charitre. Mohana Tarangini is a Sangatya Kavya which is a metre in Kannada. It contains 2,700 verses. It is also called as Krishna Charitre. Actually, it is based on the episodes from Mahabharata, Bhagavata, Harivamsha, Vishnu Purana, Skanda Purana etc. It contains the destruction of Shambarasura, Banasura, burning of Manmatha and such other deeds. They contain eighteen types of descriptions that are generally found in Kavyas. In these descriptions one can easily find contemporary life of that period in which Kanakadasa lived. Though literary critics do not consider this as a Mahakavya (epic) they accept it as a Kavya.

Nala Charitre contains 450 verses and narrates the story of Nala. This is based upon another work called Nalopakhyana. Though this is a short literary piece, it contains descriptions which brings sympathy among its readers. The love between Nala and Damayanti has been graphically portrayed and any reader would weep because of the difficulties they experienced for the sake of truth. Thus truth which is an important component of Indian life is highlighted in this poem.

The other work Ramadhanya Charitre contains 156 verses. Actually it deals with the greatness of Ragi as against Akki. Ragi is considered as a poor man’s food whereas rice is reserved for affluent people. The poet has successfully argued that Ragi is better than Akki. The contents of this work though appears to be taken from Ramayana, it actually looks like an independent work. Symbolically, Kanakadasa takes the side of common man who is represented by Ragi while rich people are represented by Akki. It was the intention of Saint Kanakadasa to show that poor people or people of lower caste can easily reach divinity than the affluent class. Even today poor people eat Ragi whereas the so-called affluent or rich people eat Akki or rice and look down upon the people who eat ragi. This is in the form of a conversation between Ragi and Akki.

So far about 400 works of Kanakadasa have been found. They contain the name Kaginele Adikeshava. Some of the famous ones which musicians even now sing in concerts are Bagilanu teredu Seveyanu Kodo Hariye (Oh Lord Hari please give darshan by opening the door); Kulakulavendu Hodedadadiri (Do not fight in the name of caste or community); Tallanisadiru Kandya Talu Manave (Do not agitate oh mind); Ellarumaduvudu Hottegagi (Everyone works for the sake of filling the stomach); Neemayeyolago ninnolumayeyo (Whether maye is in you or you are in maye) etc. Thus in these poems Kanakadasa has tried to bring social and moral responsibility among the people in society. Some of the verses of Kanakadasa are famous as Mundige which can be compared to Vachanas of earlier saints. The fact that even after five centuries Kanakadasa is still a moral and devotional force goes to show the greatness of the Saint and that is the reason why his birth anniversary is celebrated even now. Let us follow the moral principles and teachings of Kanakadasa and uplift our society and ourselves. For the present we bow down to the Saint-Poet Kanakadasa.