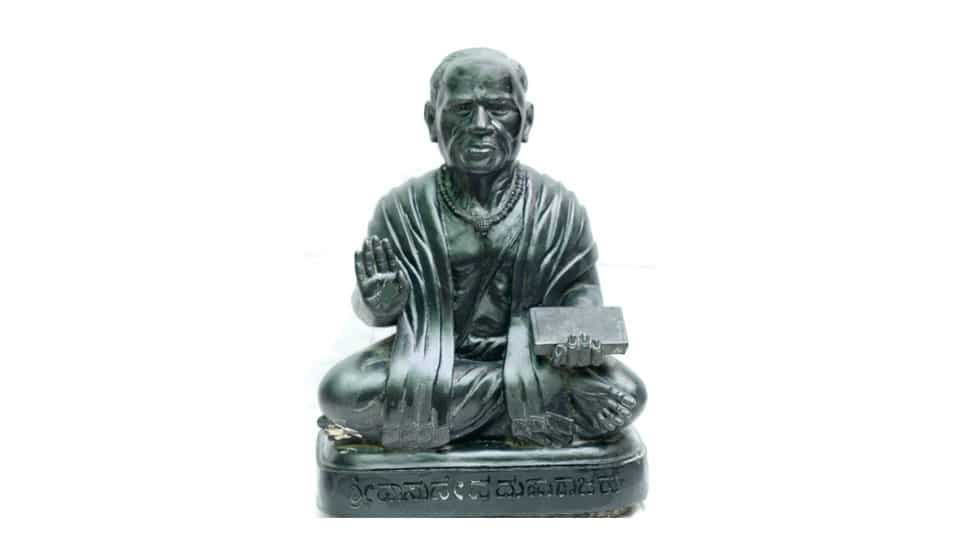 India in general and South India in particular abounds in Saints whose main interest is serving the society through various methods. Some may deliver religious lectures while others may sing songs of these great men in their melodious voice. Others may give discourses on religious aspects specially on those whose main aim is to spread communal harmony and so on. This is not today’s story but it goes back to Vedic times, including Upanishads. Still others give discourses on Ramayana and Mahabharata emphasising the victory of the good over the evil.

This is not limited to Hinduism alone, it is enunciated in Quran and Holy Bible. The Sikhs in Gurudwaras though offer the same prayers involving religious feelings but their language may be different. The Jagadgurus of various Mutts are doing the same thing with inculcating good and religious life without malice to none.

Mahatma Gandhi in our times resorted to Satyagraha to send out the Britishers. But Gandhiji said they are our brothers and friends and we Indians have no ill-will against them. We should make the Britishers realise their mistake and allow them to go out of India and we should give them a friendly send off. Thus in ancient times people never had ill-will against anybody. But unfortunately, these things have been forgotten. It is not for the betterment of society.

Under this background the life and teachings of venerable Vasudeva Maharaj may be considered. A part of his name Vasudeva refers to Krishna of Dwapara Yuga, who played a great role in Mahabharata and helped the Pandavas to destroy the bad Kauravas. The other part of his name is Maharaj. It certainly should not be mistaken as the Maharajas with luxury, Palaces and huge wealth.

However, this venerable person is a Maharaj in his own right. Though he has no Palaces and large amount of wealth as is the case with the Maharajas, he still enjoys that fame because he is a King in religious kingdom serving the society. His full name is S.N. Vasudeva Rao and he was the third son of the couple Nagappa and Puttakka. His father Nagappa, a B.A. graduate, was a Mukhtesar (financial head) in the Mysore Palace. He lived on Tyagaraja road very close to the Sai Baba temple.

Vasudeva Rao studied in D. Banumaiah School and later got his B.Sc. degree from St. Philomena’s College, both in Mysore. Then he joined the State Bank of Mysore. He married Vijayakumari, who came from a respectable family. After serving in various banks he retired sometime in 1998.

After sometime his mind was immersed in religious life of purity and social service. Daily he used to go to the Sai Baba temple without fail. He was fasting on Thursdays, a day dedicated to Sai Baba. But was eating only prasada given at the temple. Under the guidance of the priests of the Sai Baba temple he began to read the history of Sai Baba (Sai Charita) and chanted Vishnu Sahasranama daily. In addition, he became a great devotee of Sri Raghavendraswamy who has become a legend in religious life of Karnataka and many miracles are attributed to this Holy Saint.

Even as a student he visited to Mantralaya, the Holy Abode of Sri Raghavendraswamy and sat there in trance without caring for food till he was reminded by the Mutt authorities that it was time to close the gates of the Mutt.

In 1972 he came under the influence of a Holy Avadhoota (a completely detached person from this worldly desires) and he received initiated into spiritual life (deeksha). Though he was a house holder with his wife and children, he kept himself aloof from all his desires. Whenever he was free from his normal duties, he visited Shiradi of Sai Baba fame and Ganagapura of God Dattatreya. His spiritual desire wanted to visit Mantralaya, Ramanashrama of the famous Godly mystic Saint Ramana Maharshi. He also visited the famous Ashtamutts (eight Mutts) at Udupi which was another holy place.

Further at Kyathanahalli and in Mysore city he performed the Parayana (reading the holy books many times). This he did for six years. At the instance of the Avadhootas at Mysore, he visited Sridhara Ashrama which place was sanctified by Holy Saint Sridharaswamy.

Vasudeva Rao was completely immersed in thinking about all these great saints. He had a dream in which he had the darshan (holy sight) of Saint Sridharaswamy and Raghavendraswamy and being blessed by these two saints. He was never compromising regarding the truth and he never hesitated to speak his attitude without compromising the truth. This straight-forward speaking quality made him some enemies also. But he had no time to bother about these mundane things as he was immersed in lofty ideas.

He also studied astrology and became an astrologer. He never predicted future for people taking a price but astrology was for his own personal use. He came under the influence of many astrologers and specially B.V. Raman, an astrologer of international fame. This tradition of Raman is being continued by his family member Sachidananda Babu, who regularly appears on TV. But Vasudeva Rao was predicting future and past to many persons who approached him. He did not charge for his predictions. Between 1998 and 2000 he visited many holy places in India and was happy by the darshan of various temples for Gods and Goddesses.

Such a great savant hugged the permanent sleep on 27.8.2007 at 2.30 pm. Hundreds of his devotees wept for loss of this great saint. Many condolence meetings were held in Mysore, Bangalore and other places. Because of his holy life, sacrifice and good qualities, Vasudeva Rao became famous as Vasudeva Maharaj.

At the request of his devotees a basalt stone idol (black) of Vasudeva Maharaj is ready. Its weight is 67kgs and height is one and quarter feet. This idol has been carved by the expert sculptors working in the Shilpakalakendra at Mysore. At present a good and holy location is being searched to house this idol in a temple. After a suitable place is located, the temple will be built and it will become another landmark on Ramanuja road in Mysore.

In the meantime, the devotees of this great saint Vasudeva Maharaj are anxiously waiting to get blessed by this great Saint. Most people pray to God to see this temple becomes a reality soon.