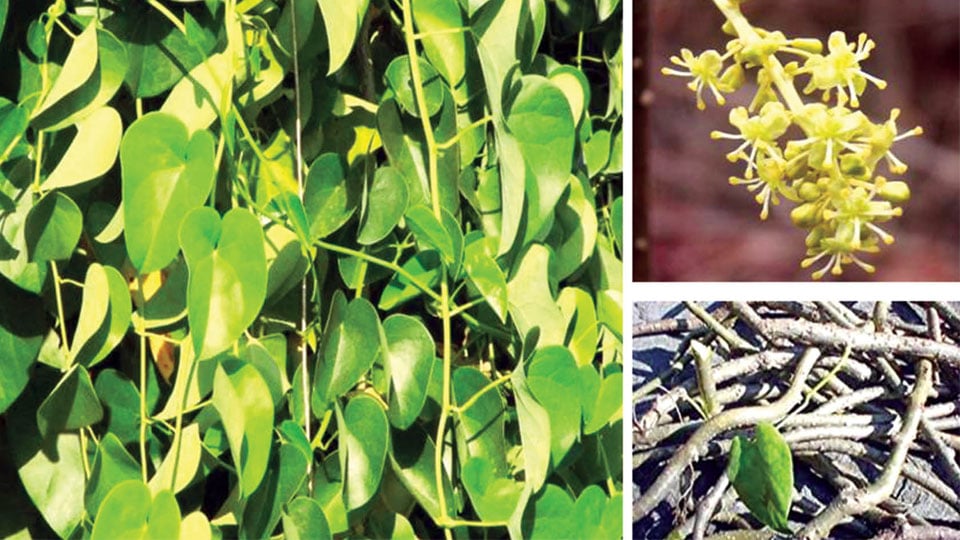 In recent months, ayurvedic medicines and herbs are gaining more importance for their usefulness to boost immunity besides  being used by many to defend themselves from Corona infection in the current crisis. It seems the people have reposed confidence in the age old ‘Traditional system of medicine’ as a first step to prevent ‘COVID-19’ from establishing in our body with the belief ‘prevention is better than cure.’

In fact, innumerable herbs and spices are well-known for medicinal uses in India and some of the herbal ingredients used from the days of yore in preparation of  immunity boosters are ‘Guduchi’ , ‘Ashwagandha’, ‘Amla’, ‘Nelanelli’, ‘Tulasi’, ‘Nelabevu’ besides  ‘Pepper’ and ‘Ginger’.

Among these, “Guduchi” or “Giloy” tops the list being the most sought-after premier medicinal herb for immunity, in several traditional systems of medicine. It is native to India.

Considered to be a ‘divine herb’ it is supposed to possess amazing health benefits. According to a legend, it is an “Heavenly elixir” and kept the angels eternally young. An another reference  from Ramayana mentions that a few nectar drops fell on the ground and formed the sacred ‘Guduchi’ plant, when sprinkled from Heaven by Lord Indra  at the request of Rama to bring back life of dead monkeys (vanara sene).

The scientific name is Tinospora cordifolia (Family: Menispermaceae) with various names* in different regions. It is known as ‘Amrithaballi, Madhuparni, Ugani’ in Kannada. ‘Amrita’ literally translates to ‘the root of immortality’ or ‘nectar’ and lends its name to the plant.

The plant, a large climbing shrub, is a familiar sight in Mysuru and found in many backyards  of the houses. It occurs throughout the tropical regions of India, Myanmar and Sri Lanka in dry deciduous forests. The elongated twining branches spread extensively. Its  special feature is  wiry aerial roots arising from the branches. Stems are somewhat succulent, creamy white to grey and papery bark with fissures and lenticels (rosette like pores).

Leaves are simple, heart shaped, thin with long leaf stalks bulged at the base and arranged alternately. Inflorescence known as racemes are both axillary and terminal; flowers tiny, greenish yellow, unisexual with male and female flowers on separate plants; technically called monoecious; male flowers with 6 stamens and females with staminodes and 3 carpels. Fruits are called drupelets (1-3), ovoid and scarlet coloured when ripe. The plant flowers during summer and fruits during winter.

‘Guduchi’ is widely used in Indian system of medicines for various purposes. According to one reference, its properties (dravya-guna) are:

Products prepared from Guduchi are:

Giloy Tablets: Made from stems, it is readily available in Ayurvedic shops.

Giloy Powder or Churna: Either buy from the market or prepare by sun drying fresh stems  till crunchy and grinding to a fine powder by sieving – grinding – sieving repeatedly.

Giloy Satva or Seenthikodi  Sakkarai: Prepared by grinding the giloy stem in water and the residue that settles down is collected and cleaned again and again. The final product is dried to a fine white powder.

Giloy Syrup: A  combination of Giloy and  herbs  like tulsi, amla, neem etc.

BGR-34: A premier Ayurvedic drug by CSIR (Government of India) for treatment of diabetes contains Giloy.

The much talked about ‘Coronil’ of Patanjali for Corona cure  and ‘Samsamali Vati’ tablets distributed by AYUSH recently in Mysuru for immunity development contain Guduchi.

Propagation: Seeds and stem cutting during rainy season is the best.