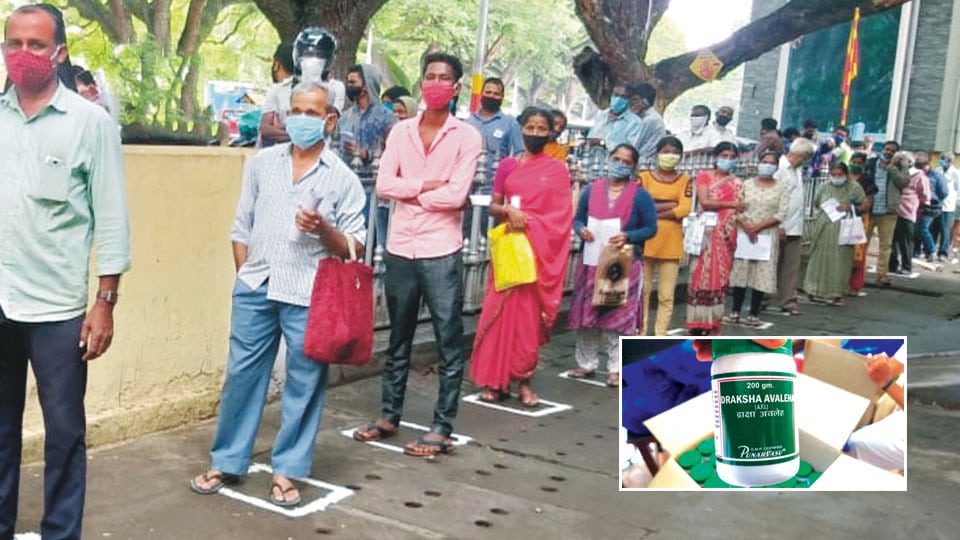 Mysore/Mysuru: Holding prevention to be better than cure, residents are rushing to Government Ayurveda College and Hospital premises on Sayyaji Rao Road (near K.R. Hospital) for doses of free immunity-boosting medicines.

Mysuru has seen a drastic jump in the number of COVID-19 cases in the past few days. Though these medicines were being given free of cost over the past few months, the rush has increased multi-fold in the past couple of days, in keeping with COVID cases.

The Department is distributing ‘Samsamali Vati’ tablets made from ‘Amrutha Balli’, ‘Araq Ajeeb’, a Unani Medicine and ‘Draksha Avaleha’, an Ayurveda Chawanprash. These immunity-boosters are being distributed following instructions from the Health Department. To avoid duplication and repeat distribution, a copy of their Aadhaar Card is taken and details are entered into a computer.

The concoction is not medicine for treating COVID-19 but generally meant for boosting the immunity. This was based on certain scientific studies and follows recommendation by experts from Indian medicine. A long serpentine line was seen at the Ayurveda College and Hospital premises this morning with people standing with their Aadhaar card copy to get the immunity-boosters.

Dr. Gajanana Hegde, Principal of Government Ayurveda College and Hospital, told SOM that many people contract various diseases due to lack of immunity in them and hence nearly 200-300 people are being given the immunity-boosters daily.

Pointing out that these immunity boosters could be consumed by everyone irrespective of age, Dr. Hegde said that two tablets of Samsamali Vati should be taken once in the morning and once in the night while two drops of Araq Ajeeb should be put on the inside of the face mask near the nasal area as it prevents bacteria and Draksha Avaleha could be consumed as Chawanprash.