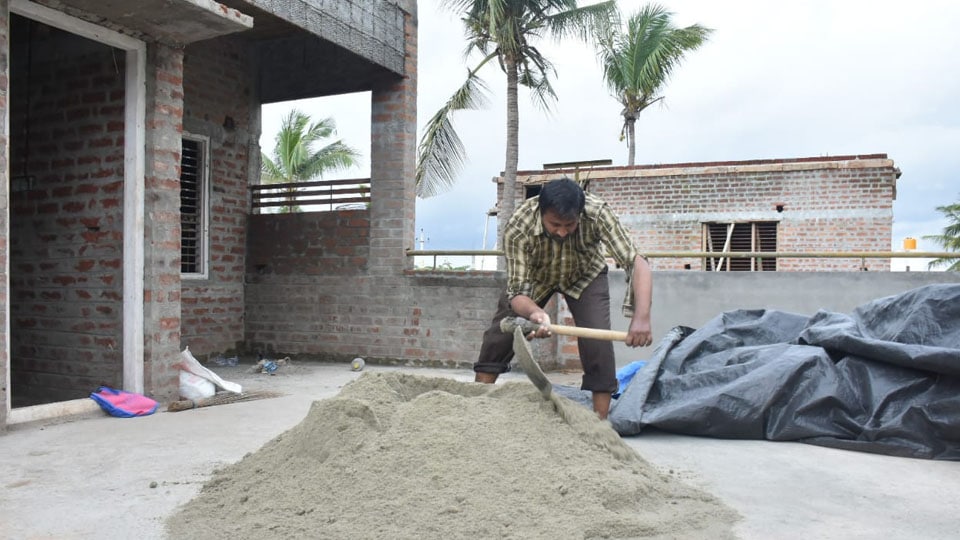 Mysore/Mysuru: Dundaiah, a resident of Vivekanandanagar in city, stands out as the odd one out among the 20 labourers working under an unrelenting summer sun at an under-construction house in Kuvempunagar.

While the other labourers comprising men and a handful of women appear rustic, sporting rubber slippers, worn out sarees and lungis with a towel on their heads, Dundaiah is clad in a shirt and trouser. He is a teacher who has turned into a manual labourer, thanks to lockdown and closure of schools and educational institutions.

Dundaiah led a rather comfortable life, earning his livelihood as a private school teacher. Until COVID-19 struck and a lockdown was ordered on March 25. A drawing/painting teacher with over 17 years of experience both in private and government schools, Dundaiah was sacked from his job and has been unpaid since.

Initially, Dundaiah managed with the meagre savings he had and looked for alternative jobs. But when the cash dried up and there was no one to borrow money from, he started this manual labour work. “I am doing such manual labour for the first time in my life. My wife is unwell and I have not been paid since March. I had no choice but to work in this under-construction house,” Dundaiah told Star of Mysore.

No other source of income

“I have no other source of income as the school where I worked has not paid me a penny for three months. I cannot sit idle so I started working on a daily wage basis and I have to support my family, my children and even my brother’s children. It will take five to six months to re-join duty so something is better than nothing. We can’t starve and I ended up here to keep the home fires burning,” he said with tears rolling down his eyes.

“I have sent hundreds of messages seeking help and I have messaged the Education Minister, Chief Minister and all the powers that be in Karnataka. Recently, Health Minister B. Sriramulu telephoned me after seeing my desperate messages and called me to his house and purchased some of my paintings and paid for them. That was a good gesture and the money helped me sustain for some days. But that cannot go on forever,” he revealed.

Dundaiah is a native of Somahalli in Gundlupet Taluk. He has served many government and private schools in Mysuru and Gundlupet. He told SOM that he was asked to vacate his house as he could not pay rent. “I was clueless and was desperate for a house. I called a person in Bengaluru and told him my story. He agreed to give his house on rent without the advance money (deposit),” he explained.

He learnt art and painting at a reputed school in Mysuru. “I applied for Karnataka Public Service Commission (KPSC) recruitment in 2011. They did something fishy and conducted the same exam in 2016. We were told that officers would come to verify the candidates but they never came,” Dundaiah regretted.

After he realised that schools will open only after August-September, Dundaiah tried getting some students for home coaching. “Nobody came as parents were too scared to send their children out. I went for some estate work and someone told me that if I stand near Kuvempunagar Circle, someone will call me for work. I wore a decent shirt, pants and slippers. Though some mesthris approached me, looking at my dress they turned away. I had to wear a faded shirt and a sort of a dirty pant. Finally I was taken in,” he narrated.

“I never revealed my identity and even some of the schoolchildren I taught have seen me doing manual work here. One day the contractor told me that I don’t look like a manual labourer at all. I had to reveal my identity and tears rolled down my eyes. He took pity on me and told other labourers not to give me heavy work. He put me into carrying bricks and sand,” he said.

Dundaiah earns about Rs. 350 per day, just enough to feed his family and brother’s children “I am ready to do any work. I am not committing any crime. It is my life and I am supporting my family through this work. Yes, teaching is a noble profession with respect in society. But teachers like me have no future. We have to switch over to manual labour if anything like COVID-19 happens,” he rued.

After sharing his story, Dundaiah continued to lift sand in a container and handed it over to the mason. But nobody can miss the pain in his face and a teardrop in his eyes.