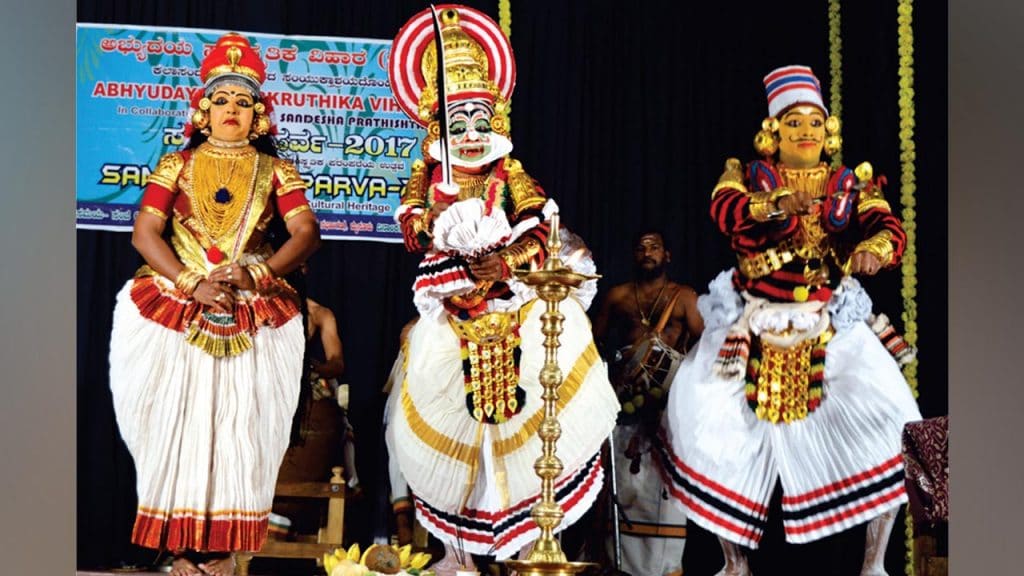 ‘Abhyudaya Samskruthika Vihara’ — a Trust functioning at the heritage city of Mysuru, envisages for the revival of the Intangible Cultural Heritage of India.

According to UNESCO, “The ‘intangible cultural heritage’ means the practices, representations, expressions, knowledge, skills — as well as the instruments, objects, artefacts and cultural spaces associated therewith — that communities, groups and, in some cases, individuals recognise as part of their cultural heritage. This intangible cultural heritage, transmitted from generation to generation, is constantly recreated by communities and groups in response to their environment, their interaction with nature and their history, and provides them with a sense of identity and continuity, thus promoting respect for cultural diversity and human creativity.”

UNESCO has also brought out a list that includes twelve forms of Indian Intangible Cultural Heritage. This list includes The Tradition of Vedic Chanting; Ramlila — the Traditional Performance of the Ramayana; Koodiyattam: Sanskrit Theatre, Kerala; Ramman: Religious festival and ritual theatre of the Garhwal Himalayas; Mudiyett: A ritual theatre of Kerala; Kalbelia: folk songs and dances of Rajasthan; Chhau dance: a tradition from eastern India; Buddhist chanting of Ladakh: recitation of sacred Buddhist texts in the trans-Himalayan Ladakhregion, Jammu and Kashmir; Sankirtana, ritual singing, drumming and dancing of Manipur; Traditional brass and copper craft of utensil making among the Thatheras of Jandiala Guru, Punjab and Yoga.

‘Sangeet Natak Akademi’ on the same lines has enumerated various forms of intangible cultural heritage of India. Thus, with the intention to protect, promote and revive these cultural forms that have been on the verge of ruination, ‘Abhyudaya Samskruthika Vihara’, formulated under the guidance of K. Sandesh Bhargav — a driving force and  pillar of the Kala Sandesha Pratishthana — had organised a two-day festival of Intangible Cultural Heritage ‘Samskruthi Parva-2017’ on Feb. 18 and 19, 2017 at Sri Vasudevacharya Bhavan (Sri Nadabrahma Sangeetha Sabha), Mysuru.

The festival led by Harikrishnan, the Managing Trustee of ‘Abhyudaya Samskruthika Vihara’ and also the disciple of Kala Sandesha Pratishthana, was a grand success.

Krishnakumar, R. Chaitra, Yadukrishnan and Manu Guruswamy being the Trustees, along with an enthusiastic set of Executive Committee Members, contributed for the accomplishment of the festival.

Day-1 (Feb.18): The festival was inaugurated by Sri Krishna Asthana Nrutyaratna Vidushi Dr. Vasundhara Doraswamy and was presided by Sangeetha Kalottunga Vid. Dr. R.S. Nandakumar who emphasised on the need for conservation of the intangible cultural heritage.

The lecture revolved around the relevance of Vedas in present times, the factors supporting the existence of the mankind, the importance of the Panchabhootas, the impact of Vedic chanting on human body and the surrounding environment.

Prof. K. Manjunatha Shrouthi also revealed in the course of his lecture that earlier there were around thousand one hundred and eighty branches of Vedas and today only ten branches of them continue to be in practise and out of seven crore matras, only twenty thousand mantras are existing. The lecture was truly an eye opener for the current generation and brought out the significance of Vedic Sciences in present times.

Day-2 (Feb. 19): The second day of ‘Samskruthi Parva-2017’ eventuated with a Kudiyattam Dance-Drama. Kerala’s Koodiyattam, a Sankskrit theatre, has a history of over two thousand years. ‘Netrabhinaya’ (eye gestures) and ‘Hastabhinaya’ (hand movements) form the basis of this art form.

The evening witnessed the episode of Jatayu Vadham by Angika Kudiyattam Kala Mandalam Artistes, who gave a mesmerising performance.

‘Samskruthi Parva-2017’ as a whole was a huge success and stood as a symbol of youth’s perseverance towards promoting our Indian culture and heritage.

With a steep rise in the youth’s favour towards western culture, organisations like these have taken initiatives in promoting our culture which are on the verge of ruination. It is also to be noted that organisations like Kala Sandesha Pratishthana are making fathomless contributions in bringing forward our cultural pride and festivals like these are precisely a paradigm in the field of art.