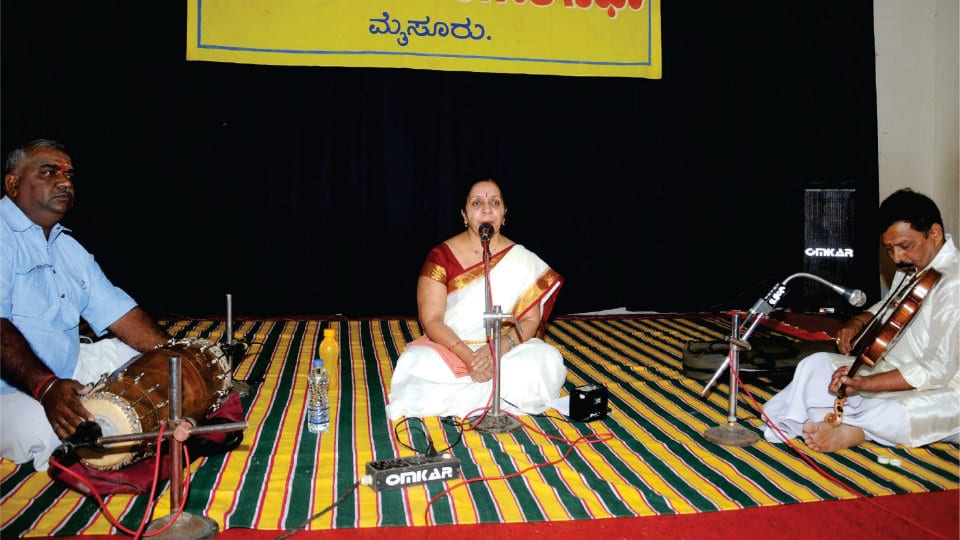 The JSS Sangeetha Sabha Trust started a few years ago under the benign guidance and patronage of the Swamiji has been doing very good work in organising a week-long music festival every year (like the famous Madras Music Academy) where top rank musicians of the land will present their talents and also in bestowing an honour on the festival Chairman. Likewise, the Mutt organises music programmes every full-moon night in the sprawling arena of the Mutt where the enthusiastic listeners have to sit around a water pond on the four triangular shaped steps sloping towards the pond and enjoy the music programme. It creates a divine atmosphere in the starry moonlit atmosphere. The contribution of the JSS Mutt in promoting music among the citizens of Mysuru is thus immense.

The present article however relates to a day-long music festival organised by the Sabha on Feb. 26 at the mini-hall of the College in Saraswathipuram —eight programmes — each an hour-long are arranged, four in the morning and four in the evening. The artistes are all drawn from the pool of local talent giving them a necessary boost in their musical voyage. The programme is meticulously organised like the one comparable to the famous Madras Music Academy.

Annually, eight such events are planned for a day and split into four in the morning and four in the evening with a good lunch thrown up after the morning event. The itinerary of the music programme related to the compositions of the illustrious trinity of Karnatak music namely Thyagaraja, Muthuswamy Dikshitar and Shyama Sastry, all ever-shining stars in the Musical Galaxy and all the eight main artistes of the event struck to this dictum. As I have to dwell on eight programmes in this event, I will restrict myself to the main items in each.

1) The Vocal Artiste was Vid. R.S. Nandakumar — A product of a famous musical family of Mysuru who is a staff of the Music University. He was accompanied on the violin by Vidu. Veena Suresh and on mridangam by Vid. G.T. Swamy. The main raga was ‘Gangeya Bhushani’ very well-treated in the alapana with all the strands of this rare and beautiful raga detailed step by step. Vid. Nandakumar literally tore into the heart of this number with rich virtuosity and the listeners were spell-bound in enjoying the same in detail, the delineation of the raga and the kriti. His Chaturdasha Raga Malika was a brilliant number, Kudos to him. Violin Maestro Mysore Manjunath — who spoke for a few minutes praised the artist and the accompanists for their wonderful performance. Vid. Nandakumar is a sure candidate to a higher national level in the music hierarchy. Congrats to him.

2) The artiste was Vidu. Padmavathi Narasimhan accompanied by Vid. Tandavamurthy on violin and Vid. M.R. Hanumantha raju on mridanga. Vidu. Padmavathi is a well-known musician with a doctorate degree and is also a versatile critic whose reviews are authentic in nature. She commenced her programme with a number in ‘Amruthavarshini’ and ended with one each in ‘Dhanyasi’ and ‘Kalyani.’ All the numbers received scholarly treatment from the artistes. Her Kalyani was superb in the Alapana as well as in the keerthana.

3) The next artiste was Vidu. M.R. Sudha, a seasoned musician in her own right. The accompanists were Vid. Tandavamurthy on violin and Vid. T.A. Ramanujam on mridanga. Vidu. Sudha chose ‘Andolika’ for a short delineation of the raga and the number was Ragasudharasa’ a Thyagaraja composition beautifully rendered. This was followed by two numbers in Kannada and Thodi, both well-treated.

4) The last number in the morning session was a brilliant flute recital by Vidu. Smitha Sri Kiran accompanied by Dr. K.T. Udayakiran on violin and Vid. Hanumantharaju on mridanga. Vidu. Smitha started as a child artiste under the late Vid. A.V. Prakash and is now a seasoned flutist in her own right. She commenced her recital with Saveri and strode into a Navavarana Dikshithr number in ‘Ananda-Bhairavi’, ‘Kambodi’ was the final raga. It was a fine performance, very well appreciated by the audience.

2) Next artiste to hit the stage was the well-known vocalist Vidu. Koviladi Kala, who has carved a niche for herself in the music fraternity of Mysuru. She was accompanied by Dr. K.R. Udaykiran on violin and Vid. H.L. Shivashankaraswamy on mridanga. Vidu. Kala was also accompanied by her daughter.

Her fist raga was ‘Kedaragoula’ and treated very well. Her next piece was in raga ‘Todi’ and it was the piece-de-resistance of the event. The delineation of this rather difficult and splendid raga by Vidu. Kala and daughter were very brilliant. The sancharas were exquisitely planned and efficiently treated.

Dr. Mysore Manjunath, who spoke after the event, gave very rich compliments to Kaviladi Kala and daughter for their beautiful rendering of this raga. The artistes richly deserve this honour.