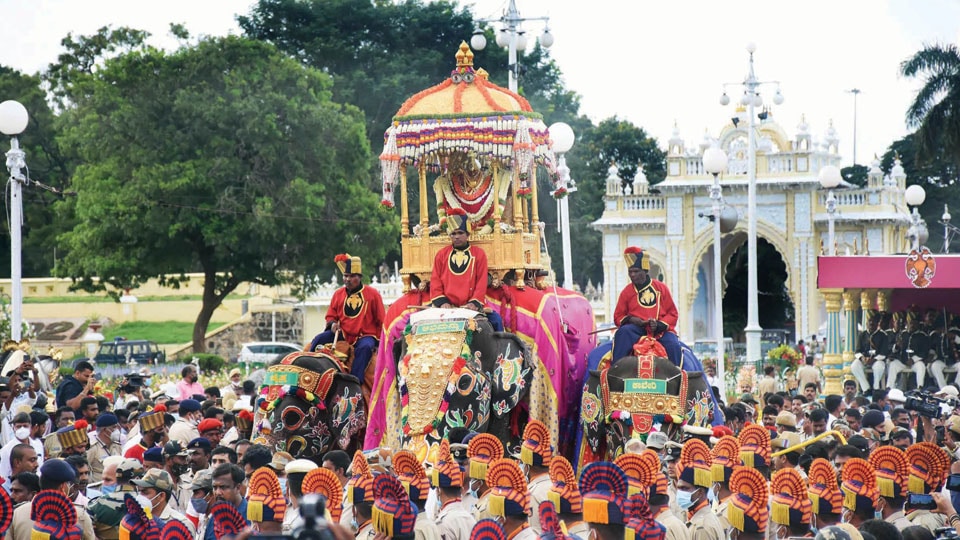 Mysore/Mysuru: Renewing its efforts to secure UNESCO (United Nations Educational, Scientific and Cultural Organisation) Intangible Cultural Heritage Tag for the historic Dasara celebrations, the Department of Archaeology, Museums and Heritage, Government of Karnataka, will again take the initiative forward and study the parameters of awarding the tag to the  Durga Puja festival in Kolkata in West Bengal recently.

Kolkata’s iconic Durga Puja that attracts tourists from all over the world and is celebrated with great zeal by Bengalis has been included in UNESCO’s Representative List of Intangible Cultural Heritage of Humanity.

UNESCO’s inter-governmental committee on safeguarding intangible cultural heritage met at its 16th session from Dec. 13 to 18 where the members commended Durga Puja for its initiative to involve marginalised groups and individuals.

Following the recognition given to Durga Puja, the Department of Archaeology, Museums and Heritage, which has its Office at Karnataka Exhibition Complex, Mysuru, is preparing a dossier on Dasara and at the same time study how Durga Puja was accorded the internationally unique recognition.

Dossier to be prepared

Speaking to Star of Mysore, Commissioner of the Department B.R. Poornima said that her Department will make another push for UNESCO recognition. “The dossier will contain visuals and videos, history, heritage, people’s involvement and also how Dasara is a festival of the masses and how it is revered in the Mysuru region that attracts tourists from all over the world,” she said.

“We will have to follow the proper protocols here. Once the proposal is approved by the Government, we will have to send it to the Archaeological Survey of India. Later, the proposal will be sent to UNESCO and out of the eight parameters, at least two must be fulfilled,” she said.

The Commissioner said that the process of preparing the dossier has begun and has been initiated regarding Dasara, she added. Mysuru Dasara has all the attributes to be recognised as an intangible cultural heritage by UNESCO as it is truly a reflection of the customs and traditions of the State.

It is a legacy of the erstwhile rulers of the Mysore kingdom, the traditional grandeur of                 which has been retained and followed to this day in the form of the Dasara celebration. Getting the intangible culture tag will help in branding the Dasara festival on the world stage, said heritage experts.

The festival has a rich history and legacy considering that it is being held since 1610 AD. Once it is under the intangible culture heritage tag, it will give the tourism sector a major boost. Also, the State Government will receive funds from UNESCO for conservation purposes, they added.

What is an Intangible Cultural Heritage?

Intangible Cultural Heritage according to the UN body is something that is contemporary, traditional and living at the same time and is community-based, representative and inclusive and has an important role in maintaining cultural diversity and its understanding can help inter-cultural dialogue and achieve mutual respect for other ways of life. It does not end with monuments or collections of objects but also includes living expressions, traditions inherited and passed on through generations through performing arts, oral traditions, rituals, social practices, festive events and the likes.

The State Departments are required to submit nomination dossiers on the relevant element for evaluation and examination of the UNESCO Committee. The nomination dossiers are prepared by the Sangeet Natak Akademi under the Ministry of Culture after making necessary interaction with experts, stakeholders. The Ministry of Culture then designs schemes for the preservation and promotion of intangible cultural heritage in the country.

Other Intangible Cultural assets of India At least 14 intangible cultural heritage elements from India have been inscribed to date on the UNESCO’s Representative List of the Intangible Cultural Heritage of Humanity. These include the Kumbh Mela, Novruz, tradition of Vedic chanting, Ramlila, Kutiyattam, Sanskrit theatre; Ramman, religious festival and ritual theatre of the Garhwal Himalayas; Kalbelia folk songs and dances of Rajasthan; and Chhau dance.