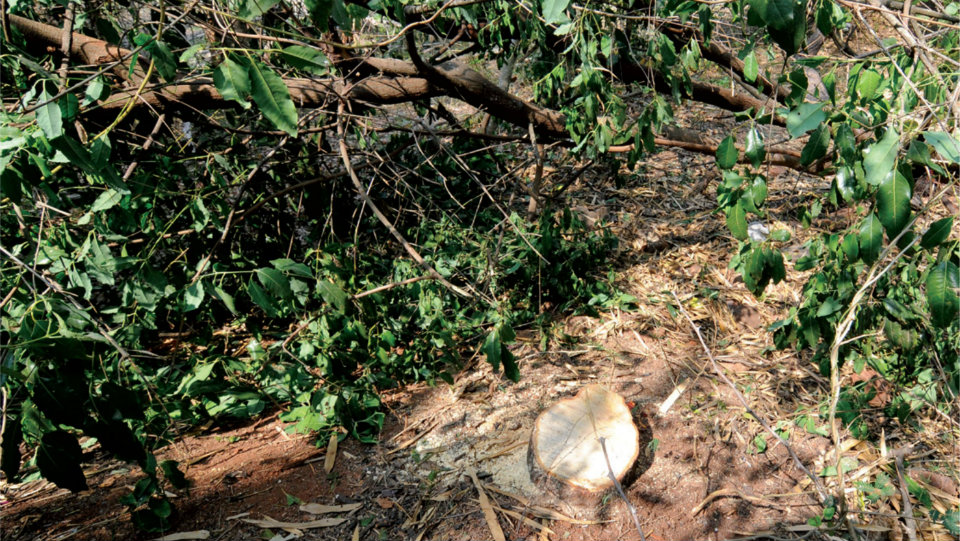 Sandalwood smuggler killed in firing was a poor tribal

The youth who was killed when forest department personnel fired at a group of sandalwood smugglers, who were cutting sandalwood trees in the mini-forest around Lingambudhi Lake on he outskirts of the city in the wee hours of the Saturday morning, has been identified as Shankar (26), of Mahadeshwara tribal colony under Bhimanahalli Gram Panchayat in H.D. Kote taluk.

Shankar was the son of Adivasi couple (Soliga tribe) Chikkamana and Thayamma. Shankar is survived be his pregnant wife and a 2-year-old daughter. He had cultivated banana in about 3 acres of land. He had sustained grievous injuries on his right arm when he was attacked by a wild elephant which had strayed into the banana plantation a few months ago.

Since then, Shankar worked as a labourer, toiling hard and to make a living and miscreants, taking advantage of his helplessness, must have sensed an opportunity and engaged him in sandalwood smuggling.

In any case, Shankar’s life was cut short by miscreants who seems to have used him in Sandalwood smuggling to reap a rich harvest. His death has come as a rude shock to his aged mother Thayamma and others in the tribal hamlet. Shankar who left the tribal colony along with his elder sister on Friday morning, reached Mysuru sub-urban bus stand. After helping his sister board a bus to her husband’s place in Ramanagara at 12.30 pm, Shankar did not return home and even failed to contact his parents. As such his parents too were not aware of Shankar’s whereabouts thereafter. And the next day i.e., on Saturday, Shankar’s mother Thayamma got the news that her son was shot dead and she went to Mysuru to identify the body, unable to hold back her tears.

It is suspected that a sandalwood racket operating in the city had lured Shankar into smuggling by promising liquor and some money and Shankar may have fallen into the trap. Thayamma says that her son was never involved in any theft or other crimes. Some miscreants may have lured him.

Shankar who left home accompanying his sister has now returned dead and those responsible for his death must be punished severely, she said and added that the Government must come to the rescue of her family.

The shooting incident has thrown light on the fact that miscreants, taking advantage of the innocence of tribals and Adivasis, are luring them to sandalwood smuggling, as they (miscreants) believe that tribals stand a better chance of escaping, if caught.

Shankar’s death cast a pall of gloom in the tribal colony. Many in the hamlet still believe that Shankar was an innocent youth and he had become a victim of the greed of smugglers.

Krishnaiah, President, Karnataka Adivasi Rakshana Parishat says that it has come to be known that smugglers from Mysuru and Bengaluru are engaging tribals in illegal acts, misusing their innocence.

These smugglers who very well know that Adivasis know every inch of the forests, are luring them to illegal activities.