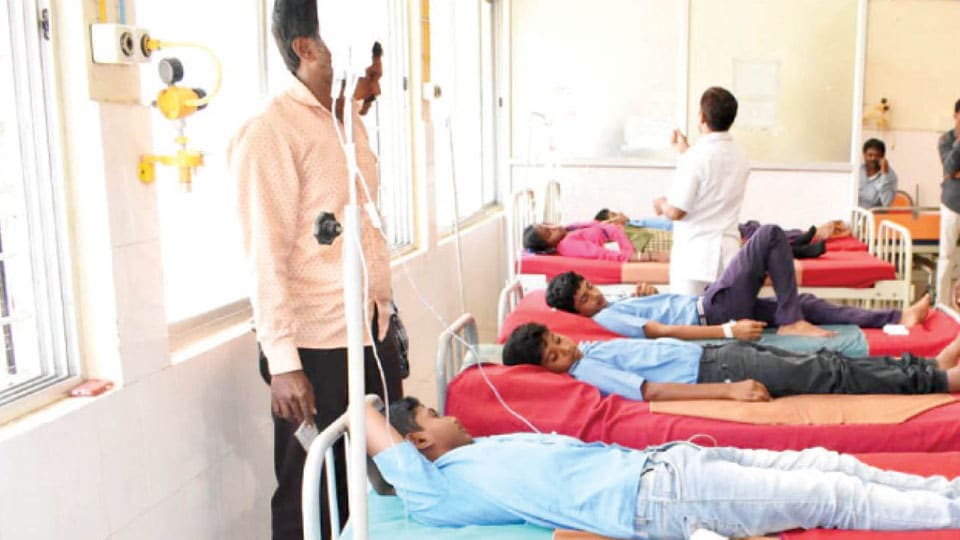 Mandya: The students of A. Hulkere Government High School, who had consumed pesticide-laced drinking water from the School’s overhead water tank and admitted to the hospital, are recovering and the doctors are continuing with the treatment.

As the miscreants had mixed organophosphorus, a pesticide, the doctors, suspecting that the pesticide may react at later stages, have kept the students under observation for two more days. As of now, everyone are out of danger and are recovering, said MIMS Medical Superintendent Dr. Harish to Star of Mysore.

He further said that blood samples of the students have been tested and the reports said that there was no problem. It is confirmed that organophosphorous was mixed in the water, Dr. Harish said and added that all  11 students would be discharged on Saturday.

Based on the request by villagers and following complaint by School teachers, Police security has been provided to the School and efforts are being made to arrest the miscreants who had mixed the pesticide to the drinking water overhead tank.

One ASI, one Head Constable and two Constables have been deployed at the School, said Mandya Rural Sub-Inspector Siddaraju.

Meanwhile, Mandya SP Shivaprakash Devaraju and other Police officials visited the village and conducted inspection. Taluk Tahsildar Nagesh, Education Department officials and others visited the Hospital and instilled confidence among students and their parents.

MLA Ravindra Srikantaiah, who visited the hospital and the village, enquired about the health of the students and sought information from the villagers.