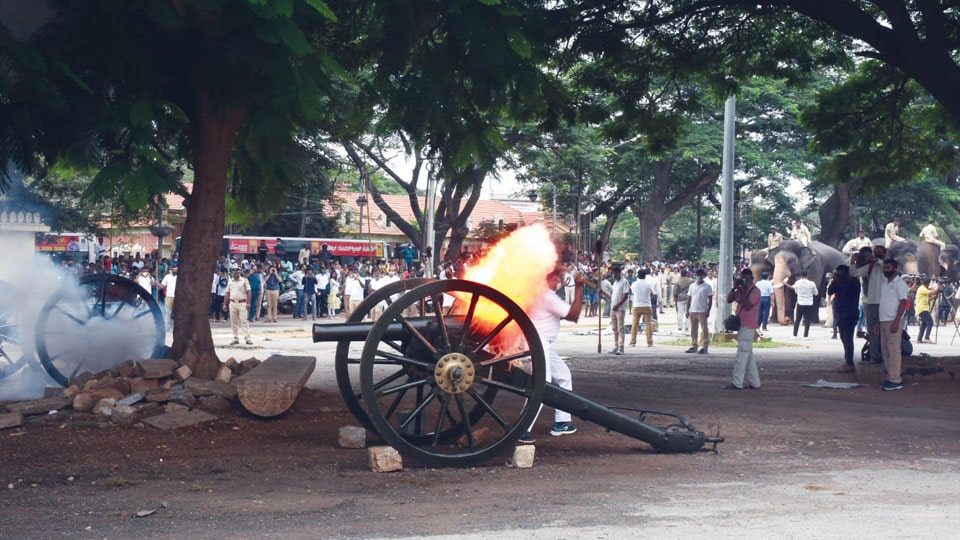 Mysore/Mysuru: The second round of cannon firing drill was held successfully with Dasara elephants exhibiting normal behaviour at the parking lot area near Varaha Gate of Mysore Palace this morning. Apart from Vikrama, all seven Dasara elephants — Abhimanyu, Ashwathama, Dhananjaya, Kaveri, Chaitra, Lakshmi and Gopalaswamy — and also 24 horses from the Mounted Police force, took part in the cannon firing drill.

Though the quantity of gunpowder was increased today, the elephants showed no fear and stood still during the firing drill. No elephants were tied today.

He further said that the weight of the elephants has increased as they are put on special diet and added that the third round of the firing drill will be held on Oct. 8.

Vikrama, who has been participating as Pattada Aane (Royal Elephant) and taking part in Dasara rituals performed by the royal family inside the Palace since 2015, will stay away from Dasara festivities this year as he is in musth.

DCF Dr. V. Karikalan, speaking to Star of Mysore said that Dhananjaya, who has been participating in Dasara since three years, will be the Pattada Aane and he will be accompanied by Gopalaswamy for the rituals.

He is being taken for walks daily and is responding to the calls from his mahout Putta and Kavadi Hemanth Kumar, the DCF said.