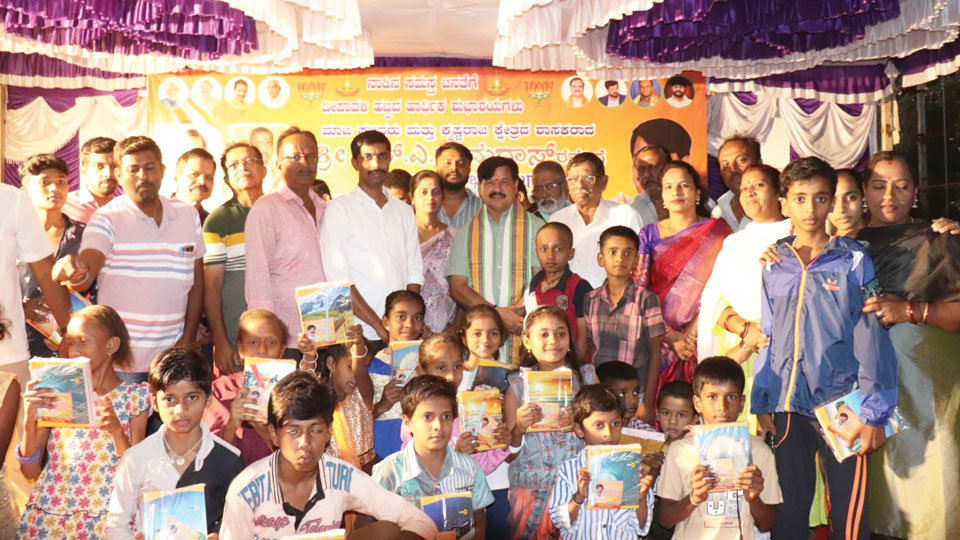 Mysore/Mysuru: Krishnaraja MLA and former Minister S.A. Ramdas celebrated his birthday on Wednesday by taking up many service-oriented initiatives including adoption of a Government Higher Primary School.

The MLA first visited Chamundi Hill and sought the blessings of Sri Chamundeshwari where he was greeted by the Mahila Morcha Wing. Later, he visited Ward 53 and distributed clothes to civic workers at Sangeeta Corner and unogranised workers card to street vendors. Ramdas distributed sarees and crackers in Ward 52 and later at a function organised by the Backward Classes Morcha of the BJP, he offered puja to cows at Pinjarapole and distributed clothes to the staff.

At Ward 54, he completed the process of adoption of a Government Higher Primary School and at Kanakagiri Circle distributed crackers to children. He served breakfast for civic and UGD workers  at Nataraja Kalyana Mantapa under Ward 51.

At Ward 50, he distributed umbrellas to vegetable vendors and fruits to patients of Secure Nursing Home. At Ward 49 and at Nanjumalige Circle, he distributed school bags and books to poor children and also gave away artificial limbs to the specially abled.

At Ward 56, MLA distributed free pen and books to SC/ST students, at Ward 60, distributed bed sheets and blankets to poor people. Later at a park opposite Ramalingeshwara Temple, he gave away crackers to about 300 children and in Ward 61, he distributed clothes and bedsheets to the homeless. At Ward 62, near Gobbalimara Circle, Ramdas distributed 25 sewing machines to poor women. He also distributed a cheque for Rs. 4.14 lakh towards subsidy amount to beneficiary C. Mahadeva, given by the Safai Karmachari Development Corporation under Airavata Scheme towards Tempo Travellers facility. At Ward 63, he gave blankets to the homeless; in Ward 65, distributed pen and books to children. At Ward 64, he gave umbrellas to vegetable vendors. Ramdas also distributed books for children at Ward 57 and gave away uniforms to auto drivers at Ward 43, 47 and 59.