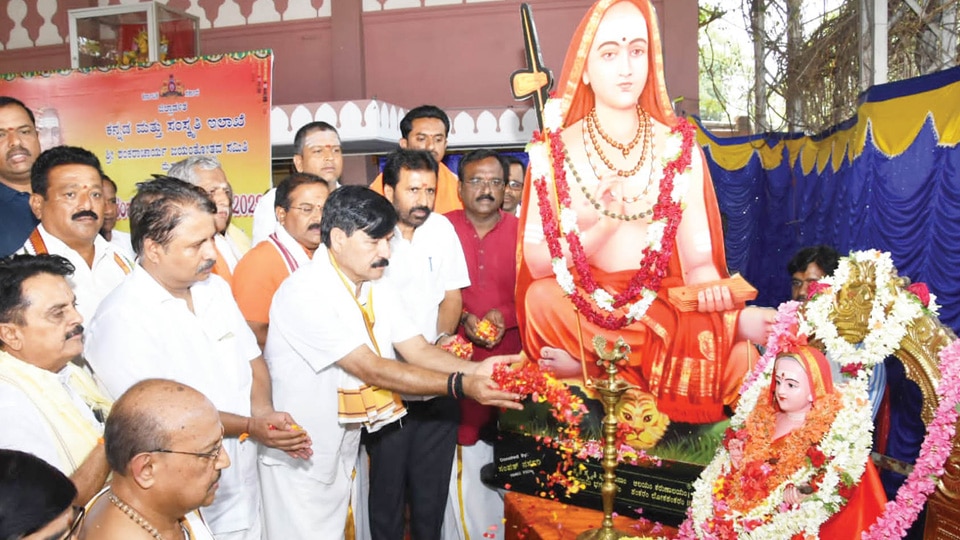 Mysore/Mysuru: “Adi Guru Shankaracharya travelled across the country on foot when the very existence of Hinduism was at stake and created awareness among the people on protecting Hinduism,” opined MLA S.A. Ramdas.

He was speaking at the ‘Shankara Jayanthi’ celebrations jointly organised by the Department of Kannada & Culture and Shankara Jayanthyotsava Samiti at the premises of Shankar Mutt on Friday.

“We tend to forget Dvaita and Advaita philosophies even after listening to them because we live in a materialistic world. We must imbibe the ideologies of Sri Shankaracharya in our life and move forward,” added Ramdas.

Mysore Paints and Varnish Ltd. (MPVL) Chairman N.V. Phaneesh, who too spoke, said that seeing Hinduism in danger, Jagadguru Adi Shankaracharya travelled across the country and infused confidence among Indians. “Shankaracharya is primarily responsible for the survival of Indian culture. He strived hard to bring unity and nationalism among Hindus,” he added.

Dr. H.L. Chandrashekar, retired Professor, Department of Philosophy, University of Mysore (UoM), observed that though Shankaracharya lived for a short period, he made the entire world look towards India. He was such a great philosopher and intellectual, he opined.