Home » Feature Articles » She ensures everything is on TRACK… on time 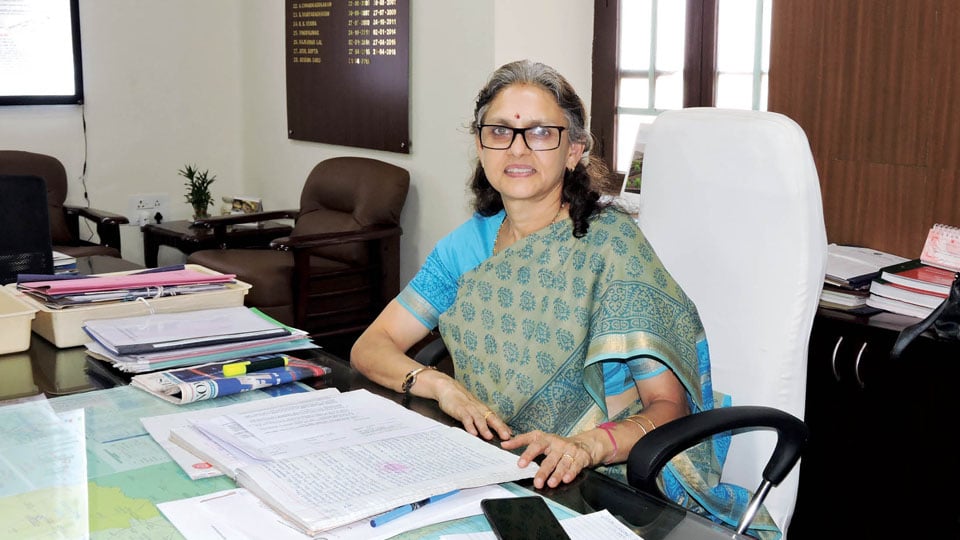 She ensures everything is on TRACK… on time

An Indian Railway Accounts Service (IRAS) Officer, Aparna Garg took over as the Divisional Railway Manager (DRM), South Western Railway, Mysuru, in April 2018. She belongs to the 1987 batch of Civil Services and holds a Post-Graduate degree in Economics. She obtained her second Master’s degree in Transport Economics from the UK.

Aparna holds a wide range of experience in all sectors of Railway operations and management and she has worked as Additional Divisional Railway Manager, Bengaluru, Financial Advisor and Chief Accounts Officer, Construction Wing and also as Senior Divisional Finance Manager in Madurai and Mysuru Divisions. She has also been a Member-Secretary, Railway Recruitment Board, Bengaluru and IT Manager in South Western Railway.

Star of Mysore: Indian Railways is one of the largest employers of people in the world. What percentage of employees are women in Mysuru Division?

Aparna Garg: Today the scenario at the managerial level is extremely good and it is for the first time that there are eight lady DRMs in Indian Railways. In Mysuru Division, there are 645 women employees out of which 340 are placed at the Mysuru Station. We also have guards and loco pilots who are women though the number is less. About 10% of the workforce here is women.

SOM: Do you think Railway serves as a good employment opportunity for women?

Aparna Garg:  There are a lot of opportunities for women in Indian Railways at different levels like signalling, telecom, control room, electrical department among others. There is track work which I think is a strenuous job. Women have come a long way and can get into any professional field.

SOM: Do you think it is safe for women to travel for long hours and take overnight journeys considering that women of today are travelling alone?

Aparna Garg: I think it is perfectly safe to travel in trains. The Railway Protection Force and security on duties perform their jobs promptly and take preventive measures. We also have lady escorts for safety. A lot has to be done by the society as well.

SOM: How difficult was it to break the glass ceiling in largely male-dominated Railway system?

Aparna Garg: If you have a positive outlook in life, you will not find anything difficult. While I was in college it was my father who decided that I should be writing civil services exam and that was the best thing that happened to me since my father was very progressive and open-minded. There was no gender discrimination in our family as I started very young, a lot of opportunities opened up and accordingly things fell into place.

SOM: Did you have to face any obstacles?

Aparna Garg:  If you are energetic, self-motivated and wanting to take charge of things everything falls into place. The journey so far has been good but once in a while you do face some obstacles which are part of any job and as a woman you have to balance your family and work and devote your energies on both sides, especially when your children are young. But that phase also goes by as children get older they get used to with whatever you are bringing them up with.

SOM: The city station is known to be tourist-friendly and is one of the cleanest in South Western Railway. What other improvements can be expected?

Aparna Garg: Skill training for the project sector, station development, 100% training for staff, having a descending escalator, increased helpline numbers are some of the things we are working on. Railway Museum development and a lot of other things are under the pipeline and passenger safety, cleanliness and punctuality will always be given top priority.

SOM:  What are your views on Women’s Day?

Aparna Garg: It’s good to celebrate Women’s Day as it reconnects to the values that women play a very important role and every role should be appreciated as they hold an equal place in the society. It’s good to see that women are being accepted in the mainstream and given attention.

SOM:  What are your other interests besides work?

Aparna Garg: I have my own routine that I follow. I practice yoga and fine arts are something that I like.  Bhagavad Gita inspires me a lot as the values in it are universal.