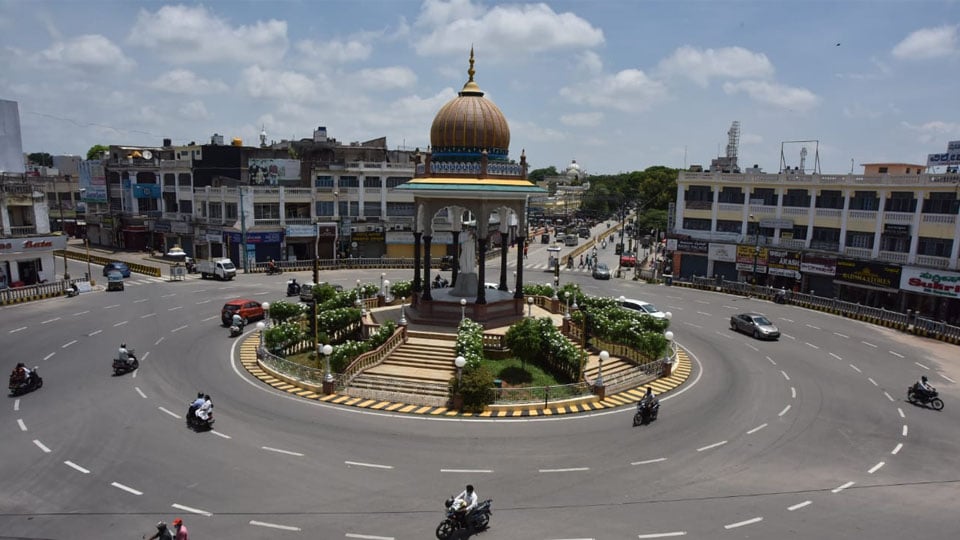 Mysore/Mysuru: A week ahead of ‘Unlock India 1.0’ where places of worship, shopping malls, hotels and restaurants can open from June 8, Mysureans went for a self-imposed Sunday curfew (May 31) and stayed indoors.

Though yesterday the State Government declared that there won’t be a Sunday curfew on May 31 and it will be a normal day of lockdown relaxation, Mysuru city wore a deserted look. Though all salons, shops, markets, business establishments in the Central Business District were open, there were hardly any buyers. There wasn’t even the Sunday ritual of hair cutting with most of the salons and parlours waiting for customers.

While many shops downed their shutters by noon as there were no people, the worst affected were autos and taxis. And even the KSRTC. Auto drivers were hoping for a decent business today but were disappointed to see empty streets. Except for a handful of drivers and conductors in the KSRTC Sub-urban Bus Stand, there were no passengers.

The KSRTC Rural Division had arranged four to five buses to Chamarajanagar and Madikeri today but the services had to be cancelled. The same scene was witnessed in City Bus Stand too where a couple of bus conductors were seen waiting for non-existent passengers. A few buses went to some city areas in the morning but the trips were later cancelled.

Shopping malls to open from June 8

Meanwhile, releasing details of the first of a three-phase plan aimed at lifting stringent restrictions, the Union Home Ministry said yesterday that places of worship, shopping malls, hotels and restaurants can open from June 8.  The plan, called Unlock 1.0, also removes restrictions on inter- and intra-State travel.

“All activities that were prohibited earlier will be opened up in areas outside Containment Zones in a phased manner, with the stipulation of following Standard Operating Procedures (SOPs), to be prescribed by the Health Ministry,” a Government statement said.

Though the new guidelines will come into effect from Monday, places of worship (large religious gatherings are still not allowed), shopping malls, hotels and restaurants (but not bars) will resume operations beginning June 8.

Decision on Schools and Colleges in July

In the second phase, the Government plans to reopen all educational institutions including Schools and Colleges, after holding discussions with States and Union Territories (UTs), who can hold further talks with parents and other stakeholders. A decision is likely in July.

Night curfew between 9 pm and 5 am

In another significant step, the Union Government has relaxed the night curfew prohibiting non-essential travel. The ban on such movement will be between 9 pm and 5 am. Previously, it was between 7 pm and 7 am.