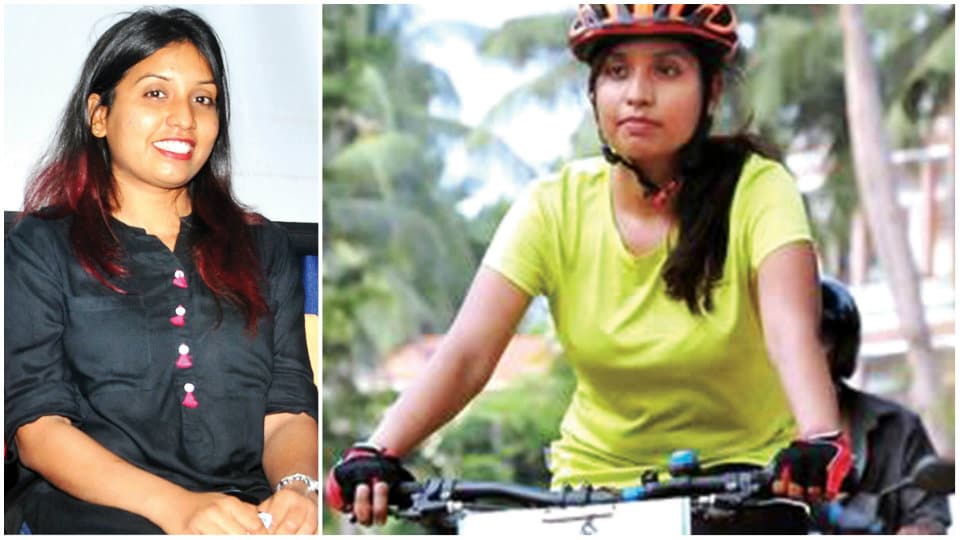 Shruthi cycles for a cause from Kashmir to Kanyakumari

The exciting adventure of cycling from Kashmir to Kanyakumari, that too giving up a cushy job for a cause, that too by a girl is indeed very rare and unique. Times have changed and women are slowly entering the field dominated by men. Be it the Army, Police, bus driving and the list is endless.

But what makes the achievement of Shruthi Shivashankara Murthy, 27, remarkable is her riding a bicycle from the northern tip of the country to the eastern tip and especially covering the last leg of her tour alone.

This and many other adventures Shruthi shared at an interaction session organised by the Institution of Engineers (IE), Mysore Local Centre, last evening at its premises on JLB Road. A resident of Gangothri Layout, Shruthi is the daughter of former Mangalore University Vice-Chancellor late Prof. T.C. Shivashankara Murthy. She was a software engineer, who quit her job as a financial consultant and started working for a NGO ‘Step Out for a Gender-Neutral India.’ A consultant for adolescent education programmes, she is also engaged in life-skill education programme as she believes that this is the only way forward.

Shruthi started her cycle journey from Kashmir to Kanyakumari, travelled a distance of 4,200 kms in a span of 45 days, a daunting journey, which this adventurous girl completed.

She reached Punjab, passed through Haryana, Delhi, Rajasthan, Gujarat, Maharashtra, Kerala and reached Kanyakumari. From Jammu to Goa, a car crew was with her who kept motivating her. But from Goa to Kanyakumari she cycled alone, she said.

In our country, every 100 kms there is a change of language, culture, traditions and my aim was to spread the message that I had embarked on among the schoolchildren and the locals. I used to discuss about the gender-neutral issues while spreading the message, said Shruthi.

The cyclist shared her experience through a power-point presentation and a lively interaction followed. The Institution of Engineers Chairman M. Chinnaswamy, Secretary B.V. Ravindranath and Co-ordinator Dinesh Kumar were present.