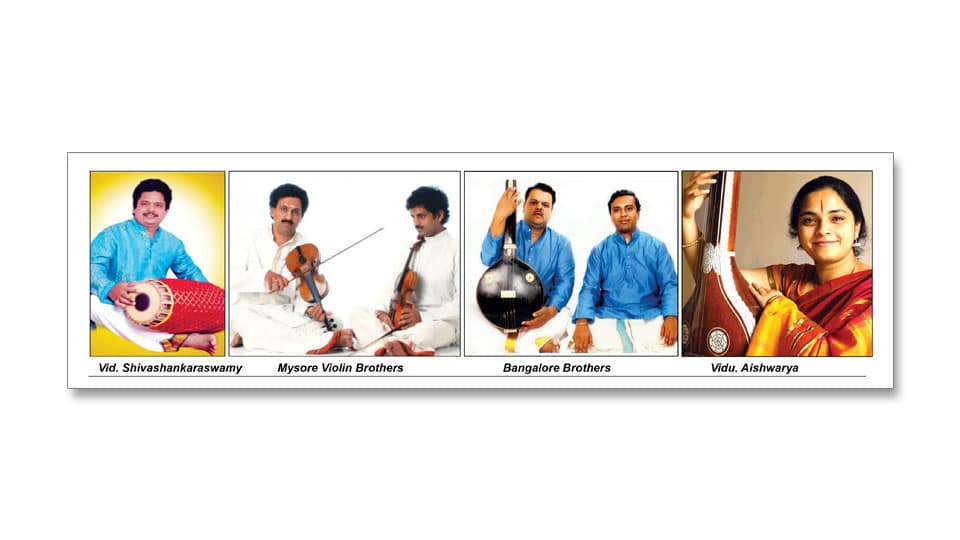 Laya Vidya Pratishtana, Mysuru: The percussion Academy is the brainchild of Vid. H.L. Shivashankaraswamy. He is the son of Manjulamma and Lakshminarayana Sharma, a well-known Keerthanakara and Gamaka Vidwan. He is one of the leading mridanga artistes of India. Born in the family of musicians, he had his training in mridanga from renowned artiste Vid. B.R. Sridhar of Mysuru.

Shivashankaraswamy has accompanied almost all the leading musicians and Vidwans of Karnatak Music. He has also given many performances in All India Radio, Doordarshan including National Programmes, Sangeetha Sammelana and South Zone Music Concerts. Apart from this, he is also a well-known name in the field of Jugalbandi and Fusion.

Shivashankaraswamy has toured abroad extensively. He has been awarded the Best Mridanga Artiste in Sangeetha Sammelana in the year 2002 conducted by Karnataka Gana Kala Parishat, Bengaluru. An ‘A’ grade mridanga artiste of AIR and Doordarshan, the Laya Lahari, conceived and directed by him, has been appreciated  by one and all.

Mysore Nagaraj and Dr. Mysore Manjunath: Amazingly gifted Violin Maestros, Mysore Nagaraj and Dr. Mysore Manjunath, the sons and disciples of renowned violinist Prof. Mahadevappa, were child prodigies who matured quickly to emerge as Top Ranking Violinists today. Their exceptional musical talents were first revealed at a very tender age of 8 when they stormed into the music world sweeping all the music- lovers and critics off their feet by their extraordinary musical acumen and technical virtuosity.

From Royal Albert Hall-London to Sydney Opera House-Australia, from Common Thread Music Festival in Oregon to Santa-Fe Festival in New Mexico, from Oxford University to World Music Festival in Chicago, from Royal Palace in Italy to Federation Square in Melbourne, Mysore Brothers have enthralled audiences all over the world.

He has the credit of being the first ever-Indian violinist to be invited to perform at the prestigious International Violin Conference held in Sandiego and Persian Academy in Iran. The Brothers have the distinction of being invited for violin concerts at some of the top venues in the world  including Prestigious Jazzar Festival in Switzerland, Bozar Music conference in Belgium, SAARC Summit, Milano Musica in Italy and National Centre for early music — UK etc.

Both Hariharan and Ashok received further training under the tutelage of Ganakalanidhi late Vid. Salem P. Sundareshan. Both are continuing their music training in vocal music under Ganakalashree Vid. H.S. Sudhindra.

A-Grade artistes in All India Radio, Bengaluru, for Karnatak Vocal Duet, both are Mechanical Engineering (BE) graduates. Post-graduates in Karnatak Music (M.Music) from University of Madras. Secured first rank in the ‘Vidwat’ Examination conducted by the KSSEB.

Ashok is also an A-Grade mridanga artiste of AIR Bengaluru and has provided mridanga accompaniment to many eminent artistes in numerous Sabhas.

Aishwarya Vidhya Raghunath: An A-graded artiste of the All India Radio and Doordarshan, Aishwarya has the honour of being the disciple of musical stalwarts — Sangita Kalacharya (late) Seethalakshmi Venkatesan, Padma Bhushan P.S. Narayanaswamy and Sangeetha Kala Sagaram Vegavahini Vijayaraghavan — thus being moulded into the Semmangudibani and the Veena Dhanammalbani. She began learning music at the age of 3 and her first performance was at the age of 13.

Aishwarya has presented Karnatak Music to a variety of audiences, including many national and international academic forums. In early 2018, she completed a two-month tour of USA and Canada with CMANA (Carnatic Music Association of North America).

Academically, Aishwarya is a Biotech Engineer and has worked as an executive at Biocon before being a full-time music professional.

Aishwarya is also proficient in oil painting, acrylic painting, water colours and charcoal drawings. In April 2017, Aishwarya’s art was recognised by Karnataka Chitrakala Parishath through the exhibition, Akanksha. This year, her painting on endangered Indian wildlife species were exhibited at the international art exhibition — Artists for Wildlife and Nature 2019.