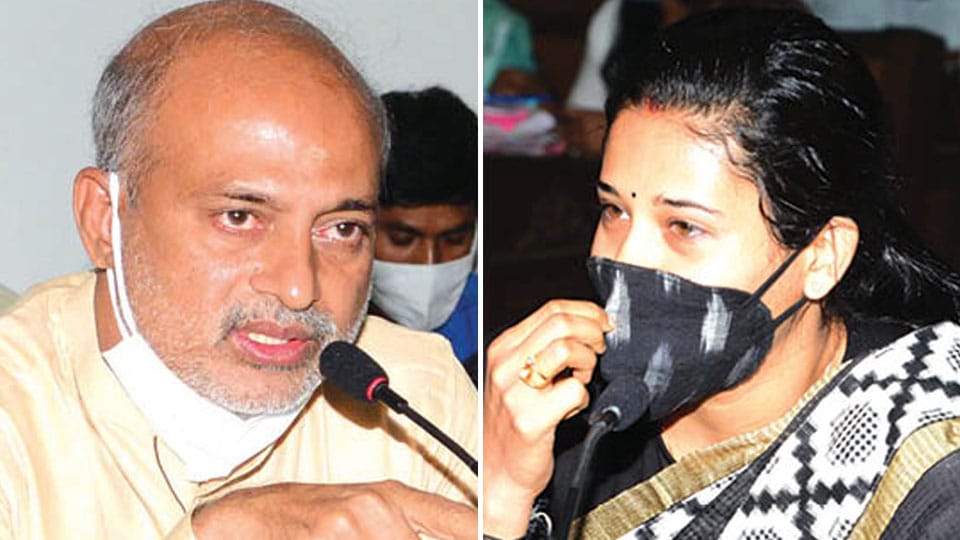 Simmering discontent between MLA and DC comes to fore

Mysore/Mysuru: The simmering discontent between K.R. Nagar MLA S.R. Mahesh and Mysuru Deputy Commissioner (DC) Rohini Sindhuri came to the fore at a meeting of Karnataka Legislative Assembly’s Committee on ‘Papers Laid on the Table’ in city yesterday noon. Mahesh is the Chairman of the Committee and the meeting was held at Zilla Panchayat auditorium.

It all began when Rohini Sindhuri sought permission from the Chair and excused herself from the meeting as the agenda of the day did not pertain to her Office. Sindhuri, who was seated in the front row as there was no chair for her on the dais, introduced herself and said that the periodic or annual reports pertaining to the DC Office or any other related Departments were not pending. As such, she sought permission to leave as the issues listed on the meeting’s agenda did not relate to her Office.

As she was speaking, the MLA butted in and asked her to remove her mask as she was not clearly audible. “Your voice is not audible. Remove your mask and speak,” Mahesh said. Sindhuri retorted that it was not advisable to remove the mask and refused to do so. “We are not supposed to remove the mask as per COVID guidelines and I will not do it,” she said and again sought permission to leave the meeting.

Mahesh told her that the Committee was in the city on behalf of the Assembly Speaker and she, as the Deputy Commissioner of a District, was informed as per the protocol. “You were not invited to the meeting. We have informed you as per protocol and as you have served as a DC in other districts, you are aware of this. But we are happy you are here though it is not compulsory. Ensure that the proceedings of the meeting are not leaked to the media before the Committee submits its report to the Speaker. If Assistant Commissioner or Tahsildar is present in the meeting, they can give us information,” he said.

At this point, other Committee members on the dais intervened and Mahesh told the DC that she could leave as there were no issues listed on the agenda which required the presence of the DC. “We have summoned the Corporation Commissioner to a related meeting and if your presence is required, we will ask you to come. If you have time, stay or else if you have some work, you can leave,” the MLA said.

Moments later, Rohini Sindhuri closed her diary, took her pen and left the meeting room. The entire episode was captured on camera and visuals of what transpired between the DC and the MLA went viral.