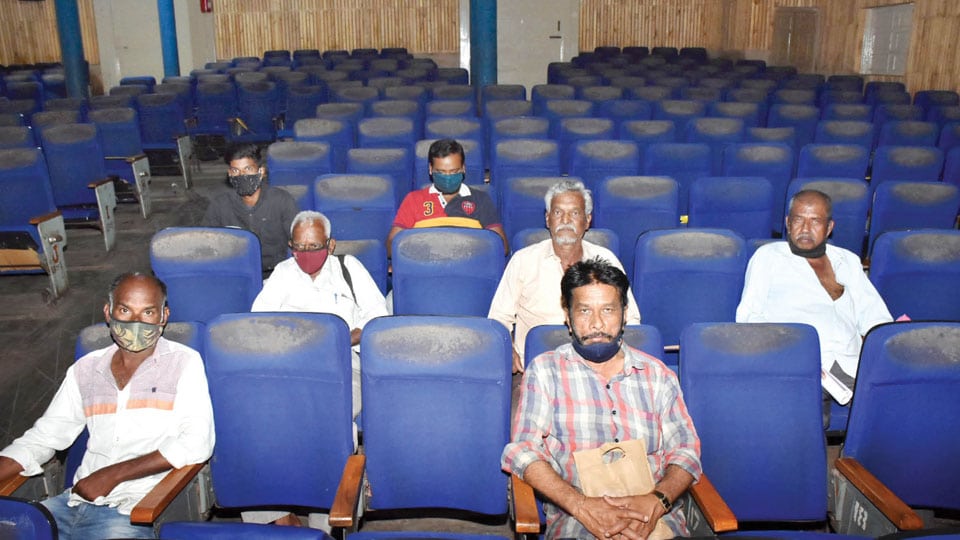 Mysore/Mysuru: Expecting patronage by citizens, a few single screen cinema theatres in city have re-opened in the last few days.

‘Padma Theatre’ in Agrahara, ‘Mahadeshwara’ in Kumbarakoppal and ‘Balaji’ in Bannimantap, all single screen cinema halls, have opened the gates to citizens. Though the turnout of people was not encouraging but still the theatre owners have resolved to keep their premises open with a hope of wooing people in the coming days.

The theatres were closed down from March 2nd week after Prime Minister Narendra Modi imposed a nationwide ‘Janata Curfew’ in the wake of COVID-19 pandemic. Initially, the bandh was planned for a few weeks; however, it was extended to almost eight months. On Oct. 15, the State Government gave permission for the opening of cinema theatres with total safety standards but the situation was not conducive for re-opening. A few multiplexes began screening movies by taking all safety measures. However, the owners of single screen cinema halls were not ready.

As a result, still a number of single screen movie halls have not re-opened. Reasons attributed to it are: non-release of star actors or big budget movies, non-simplifications of the Government guidelines and non-fulfillment of demands such as tax rebate by the State Government. The owners are optimistic that their cry would be heard by the Government in the coming days.

Mahadevaswamy, Manager of Padma Theatre told SOM: “Screening of movies will provide employment to 40 persons. For this reason, this theatre was re-opened on Dec 6. After initial screening of ‘Tagaru’, we screened ‘Act 1978’, a Kannada movie. We are incurring loss due to low turnout of people. From tomorrow, a new Tamil movie ‘Biskoth’ will be screened. We will see for one month and then decide whether to run or not. During lockdown period, the power bill was Rs. 18,000 and now it has shot up to Rs.72,000. Already, Rs.25,000 has been paid and rest is pending. We don’t know why so much has been billed despite the theatre been closed for many months.”

“The CESC officials have no answer regarding this. It is very difficult to attract people till new Kannada movies are released,” he added.

People will not come to theatres till big budget movies of star actors are released. At the same time, directors are not ready to release new movies till the Government gives permission to fill up 100 percent seats. It has been decided not to re-open cinema halls till the Government fulfills our demands. Despite this, a few single screen theatre owners have resumed business. They have been advised not to do so as they will incur loss but it is left to them. – Rajaram, Secretary, Mysuru City Film Exhibitors Association

I don’t know anything about mobile or computer. But I have the habit of watching movie in theatre. All movie halls were closed for over eight months. Now, a few multiplexes are re-opened but my budget is not big. I came to know that Padma theatre is open, so I came to watch movie. – Chandru, a resident of Kumbarageri