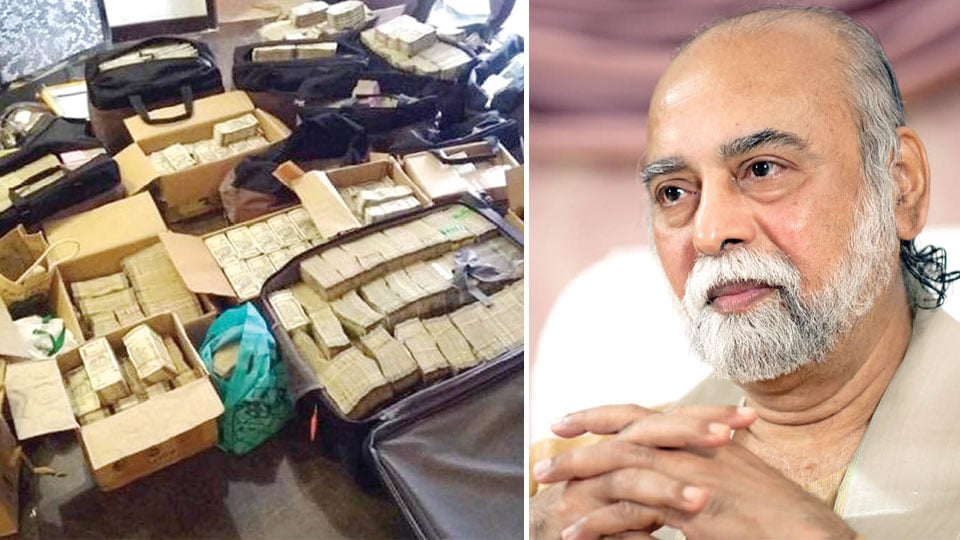 The Income Tax Department conducted raids last week where it seized Rs. 43.9 crore in cash, Rs.17.5 crore in US currency, 1,271 carats of diamonds and discovered Rs. 500 crore of undisclosed income! All this not from a thieving greedy businessman but from a once LIC Clerk named Vijayakumar, who became Kalki Bhagwan !

I first heard of Kalki when I visited my aunt in Kodagu. This was in the mid 1990s when Kalki had become of a craze. Every second person I met was obsessed with Kalki. And like how all people who follow “Babas” rabidly defend and promote their Guru, my aunt too was busy peddling Kalki gyan. Be it at family functions or at the dinner table, it was Kalki all the time.  My uncle on the other hand was constantly cursing Kalki saying the Godman had not only brain- washed his wife but had also dry-cleaned his wallet.

In fact, Kalki was the rising star of the “Baba world” in the 1990s largely because his devotees claimed he was the 10th avatar of God Vishnu and he spewed doomsday prophesy. Yes, Kalki had said that the world would suffer a lot after March 1998 and if people followed him he would purify them of their sins and save them from the suffering. And people lined up. No wonder, it prompted Outlook magazine to write an article about him titled “The Kalki Craze.”

In fact, very early in his career as a professional Godman, Kalki was accused by many parents of “stealing” their children by brain-washing them, there were accusations of hypnosis and forced donations. As the matter was getting attention, he conveniently went into Antarmukha (isolation for introspection). Of course, he emerged later and the world was not suffering any less.

It is amazing that year after year, no matter how many Godmen are exposed, people still want to follow them. A spiritual guide is understandable but becoming obsessed about a person or movement can lead to intellectual blindness and introspective dystrophy. In fact, it is this blind obsession among Indians which has led to explosion of “Spiritual Industry.”

And today Gurujis and Babas are far from the enlightened ascetic monks we imagine. Today when we say Guruji or Baba the image that pops up in one’s mind is that of power, luxury, real estate, cultural extravaganzas and long beards. Long beards being the only original ascetic trait.

Today even a modest Guru suddenly develops a fetish for  “prefix” or a “ suffix.” They are no more satisfied being a mere Guru, now they want a “Jagad,”  “Sadh” or a “Bhagwan” strung along. Then there are the palatial Ashrams and love for expensive vehicles.

Finally, once they become popular with enough devotees to troll the “non-believers” they think they can solve big problems that even scientists and lawyers cannot —  from water crisis to land disputes. And they do this while driving fuel guzzling expensive cars that pollute and hobnobbing with politicians.

No wonder, when six boys were shot dead in Sai Baba’s residential area, a Trustee of the Ashram said, “The matter is purely internal and we do not wish to have any law enforcement agency investigating into it !” Six people died and this Trustee had the audacity to say that law enforcement should not investigate!? So, yes Godmen can be above the law. Of course, depending on which side of the political equation he is meditating on.

Now, like we ask any corporate leader, how much money is enough money? Of course, Godmen provide a spiritual service and they can charge for it. From Osho’s Meditation lessons to Jaggi’s Inner Engineering sessions; Be it Kalki’s Oneness classes or Sri Sri’s Art of Living lessons, there is always money involved but where will one stop? And when will we stop addressing them as Bhagwans? Because they are mere mortals just like us.

I have visited many Gurujis but I have never felt that they were special or would deliver me to a higher level of consciousness. At best, they have given me some interesting philosophical conundrum to mull over but most have given me answers that sounded like an engineering student’s answer at his viva exam. Here is an example:

Professor: How does a processor work?

Was the answer confusing enough? This is how Godmen take us on a spiritual spin. If you cannot convince, then confuse. And Godmen have been leaving us confused for a long time but we hang around hoping to decipher the gibberish they spew upon us thinking it is enlightenment.

For now, a spiritual guide is understandable but while bowing at their feet please let us not leave our brains there, because soon our wallets too will be left there. The truth is, in the end, everyone must deal with their own pain and suffering. All anyone can do is hold your hand while you are at it. Your loving family and friends are a better bet than any Godman. So it’s better to invest your time, money and emotions on them instead of a Godman.