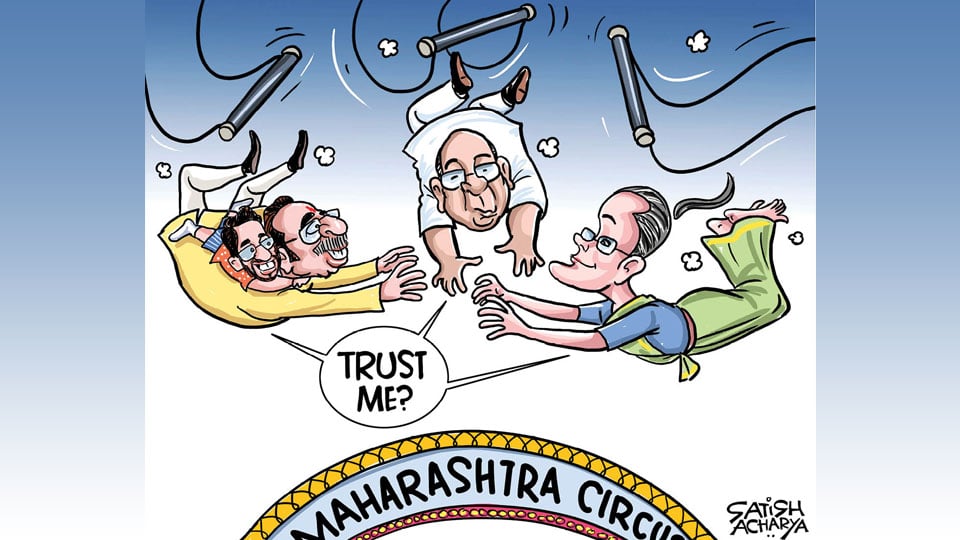 One has to ask, what use is a pre-poll alliance if the partners cannot deliver a Government even after the people have given them the mandate?

It is said Politics is the art of possibilities, but Shiv Sena and BJP have shown the art of irresponsibility. They have left Maharashtra, a State that makes up for nearly 17% of the country’s industrial output, 12% of India’s GDP and 32% of India’s tax collection in Limbo. And Why? Because, reportedly a doting father wants his 29-year-old son, a first time MLA, to be the CM.

It is ironic that the patriarch of Shiv Sena, Bal Thackeray, in an interview, when asked about Rahul Gandhi had said, “He was born yesterday and wants to be Prime Minister today. Is the PM’s post up for auction?” And here we are, 8 years since that interview, his grandson trying the same!

Like the saying goes, when two parties fight, a third will make merry and so it’s time for ‘Pawar-play’ in Maharashtra. And Sharad Pawar knows how to play politics. More importantly, he knows the art of sneaking into the Chief Minister’s chair. He has done it four times and never with single party majority!

Back in 1978, Congress was split into Congress (U) led by Pawar’s Mentor Yashwantrao Chavan and Congress (I) led by Indira Gandhi. They fought the election separately but when Janata Party was just short of majority, the ‘U’ and ‘I’ became ‘Bhai-Bhai’ and formed the Government. But just months later, Pawar took his loyalists and walked out of the coalition and formed a new coalition with Janata Party. He did this because he was made the CM. He was just 38 then!

Pawar again went back to Congress and Rajiv Gandhi made him the CM of Maharashtra by removing the sitting CM in the hope that Pawar would stop the rise of Shiv Sena.

He didn’t. In the following election Congress didn’t get majority but managed to get support of 12 independents and again Pawar became the CM a third time.

Then in 1993, Mumbai riots broke out when Sharad Pawar was the Defence Minister. He was sent to his home State to help Sudhakarrao Naik, CM of Maharashtra, to handle the Mumbai riots. According to Naik, Pawar did not help as he wanted Naik to fail. If this is true, it worked.  Naik was asked to resign and P. V. Narasimha Rao asked Pawar to serve again as Chief Minister of the State for the 4th time!

Pawar is a shrewd politician, and like most politicians, he will say what he wants. In 2014, he hinted that he would retire from politics and was praised for doing so. But the same year he returned to the Rajya Sabha. Pawar likes Power very much.

That is why Congress and Sonia Gandhi are wary of him, of course Gandhis are wary of anyone who is not a Gandhi but even Bal Thackeray of Shiv Sena did not have kind words for Pawar.

Bal Thackeray and Sharad Pawar were supposedly friends but Thackeray, when asked if he would join Sharad Pawar, said, “If politics is considered to be a game of scoundrels, it is for a man to decide whether he wants to be a gentleman or a scoundrel. If anyone wants to become a scoundrel, okay. But I will not go with a scoundrel, whoever he maybe.”

As for Congress, Bal Thackeray had no affection for the Party or the Gandhis. In fact when Rahul Gandhi made the call,   ‘Mumbai for all Indians’ Bal Thackeray wrote, “Mumbai may belong to all Indians but how can it belong to an Italian mummy.” He had also said that he would rather hand over power to the British, who at least have had the experience of ruling the country for 150 years, rather than Sonia Gandhi. The Congress in turn mocked Bal Thackeray saying he is a “tiger that needs 150 security men around him to roar.”

So this is the history of these three parties. They also speak in multiple tongues. Sharad Pawar said people have given him the mandate to sit in the Opposition so he will do just that. Now he says he wants to form a Government. Just a year ago, he said he might give outside support to BJP. Later he said BJP and Sena are old partners and will eventually get back together!

It is said your enemy’s enemy is your friend, but sometimes this could also bring your end. Now, If this trio fails, BJP may have a good chance in the re-election. Is that why BJP did not negotiate with Shiv Sena? Who knows, there is more arithmetic in politics than in mathematics.