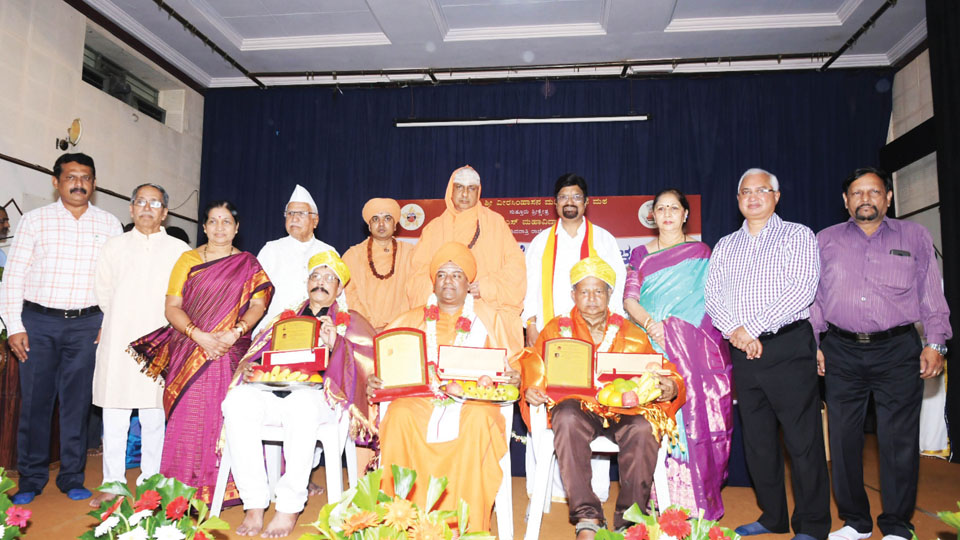 Sri Shivarathreeshwara Award for the year 2021 was conferred on Sri Prabhu Channabasava Swamiji (Athaneesha) of Athani’s Sri Motagimutt in Belagavi district for his book ‘Mahatmara Charitamrutha.’ The award carried a cash prize of Rs.25,000 and a citation.

M. Veerappa Endowment Award for the year 2021 was given to veteran artist G.R. Govindaraju of Bengaluru and the D.V. Halabhavi Award was conferred on artist K. Purushottam of Mangaluru.

Sri Shivarathreeshwara Religious Endowment has been presenting this award since 1983 for the best books written in literature, religious and cultural segments. This award is given every year and so far, 32 writers have won this award.

“In the present scenario, it is opportunists who are bagging various awards than the deserving because they lobby hard for the awards,” he opined.

Speaking after receiving the award, Sri Prabhu Channabasava Swamiji, said that Dr. Sri Shivarathri Rajendra Mahaswamiji is always remembered for his social works and dasoha. “For the last 30 years, I have been observing various deserving writers getting this prestigious award and was wondering whether I too can achieve something like this. But now because of the blessings of Guru, I have got this award,” he added.

“There was opposition for 30 years for a library in People’s Park because of which it was put in cold storage. Sri Swamiji intervened and solved the problem and now a library is functioning there because of Swamiji’s  help,” he said.