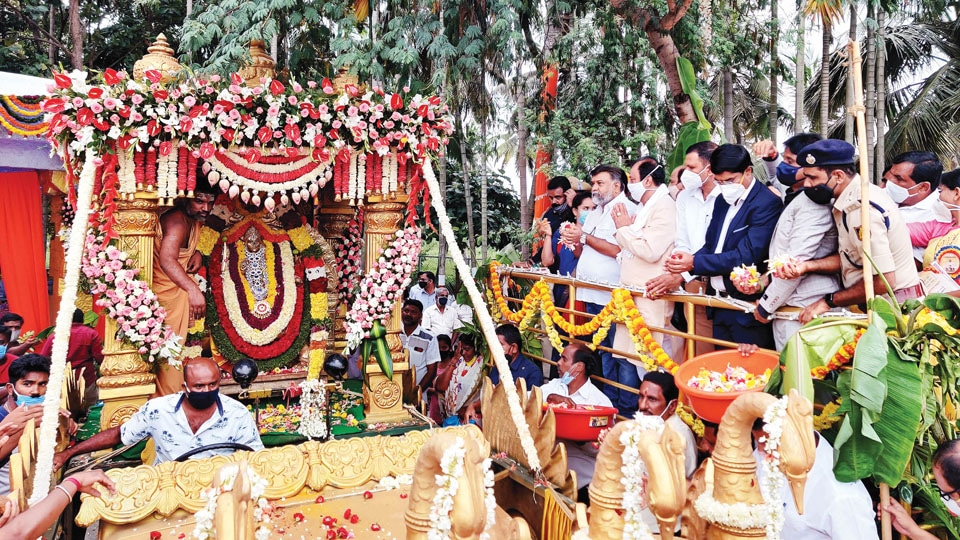 Srirangapatna: Amid COVID-19 pandemic, the Fort Town of Srirangapatna in Mandya district witnessed a traditional Dasara on Friday, drawing large crowds for the grand event.

Mandya District Minister K.C.Narayanagowda inaugurated the one-day Dasara festival by showering petals on the idol of Goddess Chamundeshwari at Bannimantapa and offering prayers to Banni tree at Kirangur on K.R. Pet Road. The  customary pujas and rituals were performed by a team of priests led by Dr. Bhanuprakash Sharma.

Speaking on the occasion, District Minister Narayanagowda said that Srirangapatna Dasara was a low-key affair this year due to the outbreak of the deadly Coronavirus, with the celebration restricted to just one day. Stating that he has prayed the deity to end the COVID-19 contagion once and for all and thus bring peace to the minds of the people, he asserted that there will be a grand Dasara next year.

MLA Ravindra Srikantaiah, in his address, said that Narayanagowda tried hard for getting the Government  release Rs. 50 lakh at the last moment for Srirangapatna Dasara. Thanking the Minister and all the Corona warriors for their untiring efforts, he said that he has prayed Goddess Chamundeshwari for the well being of the people and to root out the deadly virus from the globe.  Several Corona warriors were felicitated by the District Administration on the occasion.

The event featured several cultural programmes, which chiefly included a music concert by renowned Music Director Gurukiran and a Dance presentation by Aayana and troupe.

Mandya Deputy Commissioner Dr. M.V. Venkatesh, ADC Shylaja, Tahsildar M.V. Roopa and a host of other officials  were present on the occasion.