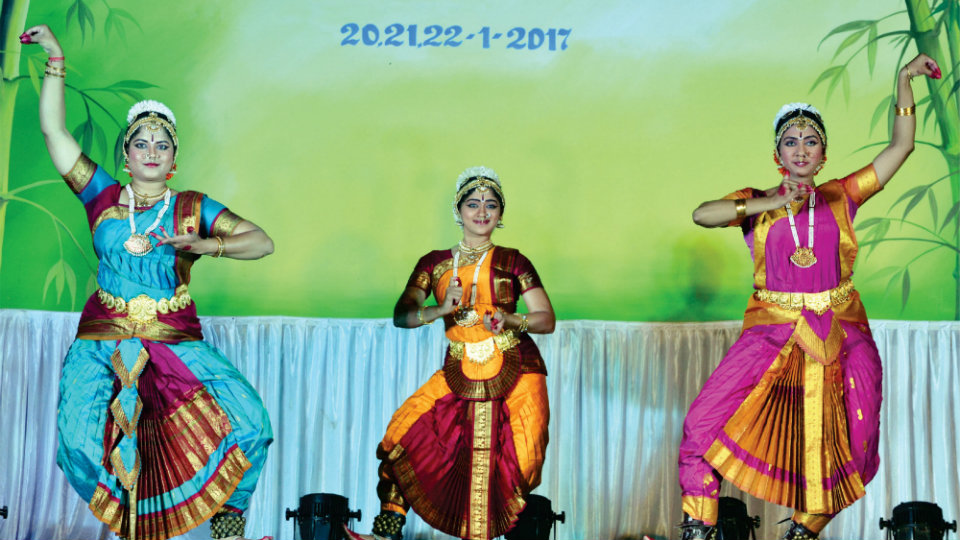 The rasikas of Mysuru were treated with a number of Bharatanatyam performances during the 20th year celebrations of ‘Nrityagiri’ Academy of Performing Arts and Research Centre, recently. The grand three days event that was held at the Open Air  Theatre of Ganabharathi gave an opportunity to many dance schools of Karnataka.

This programme also created an awareness of the changing trend among the young dancers. It was evident in this festival, the ‘Marga’ tradition and the Live music taking a back seat though slowly. Recorded music seems to be order of the day. Instead of the traditional Marga paddhati, young dancers felt free to simply dance for any item any time indicating the change in form and format of classical dance.

The three-day event was inaugurated by Dr. Sarvamangala Shankar, Vice-Chancellor of Karnataka State Dr. Gangubai Hangal Music and Performing Arts University and was chaired by Guru Prof. Ramamurthy Rao. A book on dance, ‘Nrythyakalpa,’ authored by Vidu. Roopa Madhusudan, was released by Vid.  Kamalaksha Achar, Director, ‘Nrutyaniketana,’ Belthangadi. A CD with songs for dance, sung by Vid. Rakesh, was released by Dr.Vasundhara Doraswamy, the famous Dance Guru of Mysuru.

Vidu. Kripa Phadke, the Director of ‘Nrityagiri,’ plans to celebrate this ‘Nrityavimshathi’ all through the year with Sangeetha, Nritya Nityotsavas, ‘Bhavaspoorthy,’ Make-up Workshop, Rangapravesha, Yuvanrutyotsava, seminar on Natyashastra and an educational trip to Tanjore with all the artistes.

Sai Arts International of Bengaluru and ‘Tandava’ group of artistes performed on the second day. The talented students of Dr. Suparna and Sai Venkatesh presented a neat and inspiring show. Their enchanting sequences and moods had the capacity to engender varying aesthetic stimuli. All the items they presented came alive in the truest sense. They opened the session with a ‘Mallari’, which had formations that breathed new hope.

‘Pushpamanjari’ and ‘Suryashtakam’ were yet different concepts offering  flowers to five Gods and the eight dikpalakas with 5 ragas and 5 different talas. The young dancers with their catchy costumes and perfect formations stole the show. Shwetha Venkatesh, Kabita, Harshita, Sharath and Nidhag Karunad were the promising artistes.

Disciples of different Gurus with a similar interest, attitude and conception have joined together to form a group called ‘Tandava.’ B.N. Ananth, Karthik Datar, Somashekhar and Shrinivasa Rajendran from Bengaluru danced with vigour and verve throughout.

After the invocatory ‘Shri Gananatham,’ they presented a Varna, penned by Vid. Balamuralikrishna ‘Amma Aanadadaayini’  which had good choreography displaying the seven chakras in our body. Almost all the items were heavily laden with rhythmic patterns and loud percussive instruments. It was clear that ‘Tandava’ was a vent to experiment with their creativity.

On Jan. 22, ‘Sridevi Nrutya Kendra’ of Mangaluru presented a number of items under the leadership of Dr. Arathi Shetty. The items, which were at par with the tradition, included ‘Pushpanjali’, ‘Jathiswara’, ‘Shabda’, ‘Varna’ and Kruthis and a tillana. Guru Arathi Shetty presented a dance form which was cleverly woven in an interesting question and answer format in Telugu. The students were yet to attain perfection in both abhinaya and foot work. Their mudras and postures too needed to be improved.

A solo performance by Sandesh Bhargava proved to be a fitting finale to the three-day Festival of Dance. A disciple of Dr. Vasundhara Doraswamy, Sandesh was the only dancer who performed with live music in the whole festival. He was ably accompanied by Dr. Vasundhara (Natuvanga), Sriharsha (Vocal), Hanumantharaju (Mridanga)and Narayan (Violin).

He impressed the audience with his stylish performance within the short time. After the opening ‘Melaprapthi’, he had chosen ‘Gaanamurthe’ of Tyagaraja. Rukmini’s swayamvara appeared in the sanchari. The last and the best performance was the Varna. He had selected a few poems from the ‘Vikramarjuna Vijayam’ of Pampa, the great poet of Kannada and composed it in the form of a Varna.

Selecting Karna, the tragic hero as the main character, Sandesh gave a brilliant performance that was packed with emotion. Different sequences from Karna’s life like his promise to Kunthi, Parashurama’s curse, giving away his earrings and the kavacha to Indra, sacrificing his life in gratitude to Duryodhana were picked up and choreographed by Guru Vasundhara Doraswamy. Sandesh easily captured the audience with his satisfying performance. Selection of such Kannada poetry truly deserve an applaud.