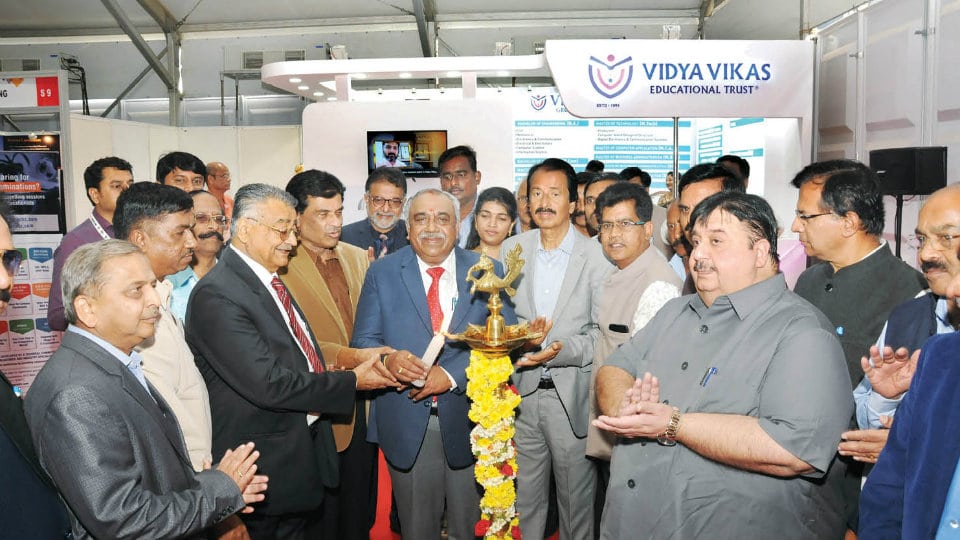 Star of Mysore Education Fair off to a flying start

Mysuru: The cultural and education hub, Mysuru, had  not seen anything like this before and as the day began this morning the eagerly-awaited Star of Mysore Education Fair got off to a flying start in the presence of leading educational institutions from KG to PG and educationists all gathered under one roof at the sprawling Maharaja’s College Grounds.

The inauguration of the Education Fair started on a simple note with Indian Science Congress Association (ISCA) General President and former VC of University of Mysore Prof. K.S. Rangappa cutting the ribbon to mark the opening of the three-day fair.

Prof. Rangappa, in his brief address, said that it was a unique moment in the history of the city that an Education Fair is being organised where both the schools and colleges from different parts of the city as also the neighbouring districts have come together.

Prof. Hemantha Kumar said that after roti, kapada aur makan, it was education that was the most important requirement and these days the stress is on quality education. While appreciating Star of Mysore for conducting a much-needed Education Fair of international standard he said, “An Education Fair like this gives ample opportunity for both parents and students to choose the schools and colleges of their choice under one roof.”

Former MLA Vasu delving into the history of educational institutions recalled the contributions of founders like Tataiah of Sarada Vilas, D. Banumaiah of Banumaiah’s and even the present day ones like Pushkarni. He reminisced how there was a time when the opening of CBSE schools were not allowed and how finally the first Kendriya Vidyalaya was granted permission and with it began the opening of CBSE schools in city.

JSS S&T University VC Prof. B. G. Sangameshwara said that he was very happy and excited to be a part of the event as the all JSS Institutions were participating in the Fair in a place which is called the University City. Such Educational Fairs will go a long way in helping both parents and students to select the institutions of their choice to study, he added.

Star of Mysore Editor-in-Chief K.B. Ganapathy said that this is a unique kind of festival since education must always be a celebration which is nothing but celebration of life itself.

Star of Mysore Managing Editor Vikram Muthanna, who proposed a vote of thanks, said that while Star of Mysore is a local paper it has tried to deliver an Education Fair of global standards. He then thanked Seer Sri Shivarathri Deshikendra Swamiji, District Minister G.T. Devegowda and MLA S.A. Ramdas, who though were not able to be present, had lent their support in the Fair.

He also thanked Prof. Hemantha Kumar, who suggested to him to hold the event at Maharaja’s College Grounds instead of Scouts and Guides Grounds.

Later, the dignitaries went around all the stalls in the Fair, which will conclude on Feb. 10.