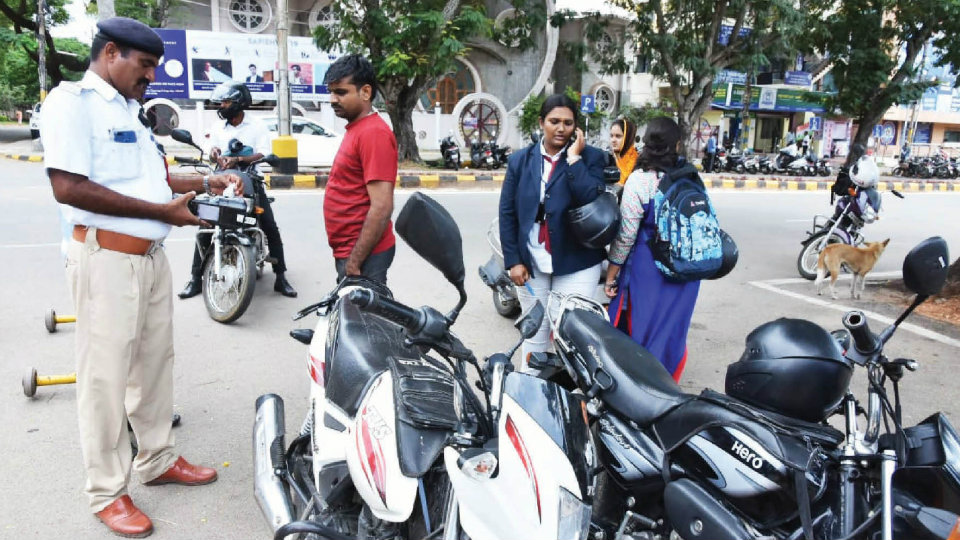 Bengaluru:  Yielding to public pressure, the Karnataka Government yesterday announced a cut in penalties for traffic violations under the amended Motor Vehicles (MV) Act. The Government issued a notification revising the fines that need to be collected for various traffic violations.

The Notification was issued by the Transport Department specifying the new reduced fines for traffic violations. There has been severe criticism to the ‘hefty fine’ from sections of the public, with many arguing that the Government should first provide good road infrastructure. Some sections opposed the move to slash the amount, saying there was a drastic improvement in motorists following the rules after hefty penalties were imposed.

While there were a number of fines reduced in the notification issued by the Transport Department in the State, the fines for crimes like drunken driving and racing remained unchanged.

The traffic fines were revised after Chief Minister B.S. Yediyurappa asked Transport Minister and Deputy CM Laxman Savadi to reconsider the high fines which came into effect at the start of September. While the high fines led to positives including more than 5 lakh people in the State obtaining their Pollution Under Control certificates (emission certificates) for their vehicles in just two weeks, some fines have now been reduced to give relief to citizens. Karnataka followed Maharashtra and Gujarat in reducing the fines.

Incidentally, the high fines were approved by the BJP-led NDA Government at the Centre, and all three States now revising these fines to lower them are BJP-ruled. The MV (Amendment) Act, 2019 was passed by both the Houses of Parliament with three major amendments recently.

Penalties for riders not wearing a helmet and seat belt both reduced to Rs. 500 from Rs. 1,000.

Fines for racing and trials of speed under Section 189 of the MV Act retained at Rs. 5,000.

No change in penalty of Rs. 10,000 for riders caught driving under the influence of alcohol.

Fine for driving without insurance reduced from Rs. 2000 to Rs. 1000 for two-wheelers.

Fine for violation of safety measures for motorcycle riders and pillion riders has been reduced from Rs. 1,000 to Rs. 500.

Penalty for offences where no penalty is specifically provided was reduced from Rs. 1,500 to Rs. 1,000 for a second offence. The same fine however remains Rs. 500 for the first offence.

Fine for disobedience of orders of authority and refusal to share information was reduced from Rs. 2000 to Rs. 1000.

For driving vehicles exceeding permissible weight, the fine has been reduced to Rs. 5,000 for overloading and Rs. 2,000 for every additional tonne of excess load together with the liability to pay charges for off-loading of the excess load.

Using vehicles without permit/violation of permit conditions the fine earlier was up to Rs. 10,000.  It is now Rs. 5,000 for the first offence, Rs. 10,000 for the second and subsequent offence.