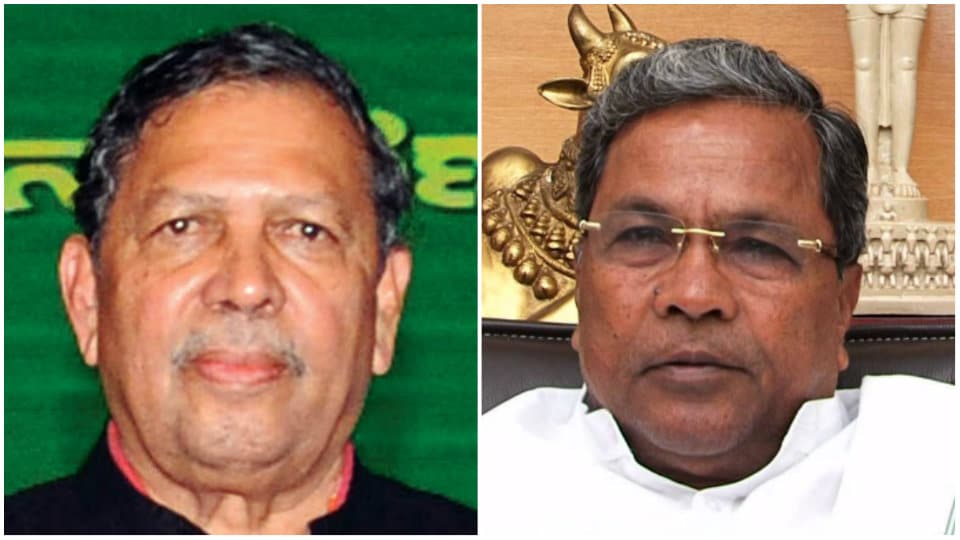 A house divided cannot stand,’ is an old maxim that emphasises the need for unity among law-makers and the people for better governance and a peaceful society. Sadly, our Chief Minister Siddharamaiah does not care to appreciate this time-tested maxim.

When one is a mere politician, not a Statesman, the hunger is for power, right or wrong. For such a person, means need not justify ends.  He forgets Mahatma Gandhi’s philosophy of life. No wonder, the Karnataka government has accorded ‘minority religion’ status to the Lingayat community (which in fact is a majority community) by dividing the original Veerashaiva-Lingayat religion. This way he thinks the BJP’s perceived vote-bank of Veerashaiva-Lingayats can be broken to the advantage of his Congress.

Reacting to this ‘Divide and Rule’ policy of CM Siddharamaiah, Justice Santosh Hegde, former Karnataka Lokayukta for five years, has tweeted like this:

“A request to Hon. Chief Minister of Karnataka.

Sir, when will you recognise either Digambar or Shewtamber as backwards, when will you recognise Shias or Sunnis as separate religion for recognition as backward. Or Protestants or Roman Catholics as separate religions for offering backwardness or which of left or right SCs as more backwards or which of Bunts or Nadavas as a different religion and amongst them who is more backwards and among Brahmins who will be Vaishnavas or Shivas or will you divide Siddharamaiah to Sidda and Ramaiah Sir. I am not a politician. I am not interested in who will win the next elections but Sir, where will politics stop dividing us ordinary people? Santosh Hegde.”

Now, this decision of according ‘minority religion’ tag to the ‘dominant Lingayat’  community seems to open the proverbial Pandora’s Box with other real ‘minority religion’ communities asking for the same status to grab the advantage this status earns for the community.

According to The Times of India of today (22.3.2018), Kodavas, a martial race from the coffee growing hilly district of Kodagu, too are demanding a ‘minority religion’ status. They say their population is minuscule with 1.5 lakh, they are indigenous tribals with their own language which is a dialect and who worship spirit Gods (Bhootas). They worship their ancestors and nature too, hence their religion is animism. Their food habit is different from others as they consume alcohol and eat pork and meat.

On Wednesday (21.3.2018) M.M. Bansy and Vijay Muthappa, both Kodavas, had submitted a memorandum to the State Minorities Department on behalf of the Kodava community demanding ‘minority religion’ status as given to Lingayats. They hope Siddharamaiah will be as condescending to Kodavas as he is to Lingayats.

3 COMMENTS ON THIS POST To “‘Stop Dividing we ordinary people’: Santosh Hegde to Siddharamaiah”