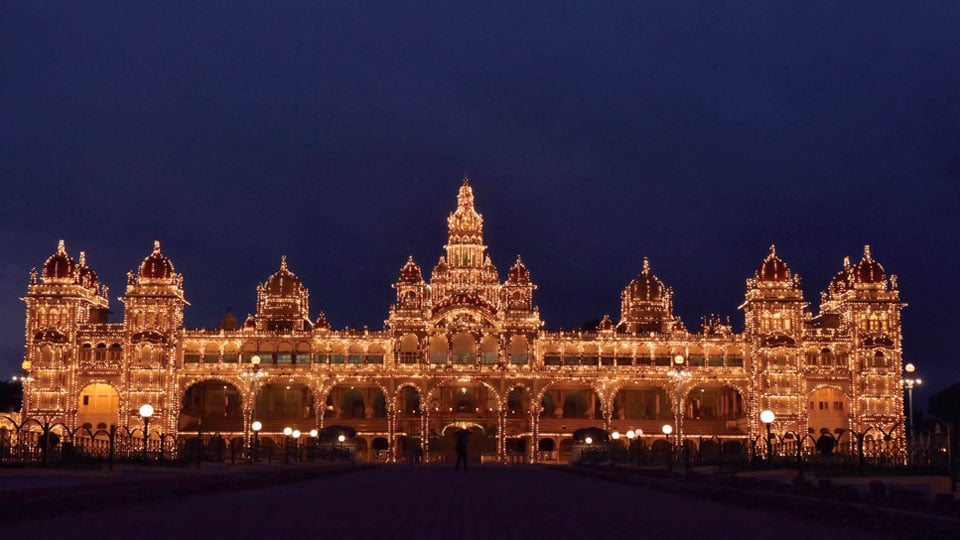 Stopped since March 24…: Mysore Palace illumination to resume from Oct. 17

Mysore/Mysuru: Tourists visiting Mysuru have to wait for one more month to witness the spectacular illumination of Amba Vilas Palace (Mysore Palace), one of the main attractions in the city.

The Palace illumination was stopped from March 24 this year after Prime Minister Narendra Modi announced a complete lockdown in the entire country in the wake of outbreak of Coronavirus. Since then there has been no illumination of the entire Palace even on Sundays and general holidays to prevent the people from flocking the premises to click pictures of the illuminated Palace.

T.S. Subramanya, Deputy Director, Mysore Palace Board, told Star of Mysore, “We had decided to stop the illumination of the Palace building to prevent the people and tourists from gathering in groups inside and outside the Palace premises to check the spreading of COVID-19. This ban will continue till Oct. 16. The Palace illumination will resume only from Oct. 17 (inauguration of Dasara-2020). Till then, there will be no lighting of the Palace on Sundays and public holidays.”

According to him, managing the public is a biggest problem as an average of 5,000 people would gather to see the illuminated Palace and to take its pictures by forgetting the mandatory social distancing. Due to strict guidelines from the Union Ministry of Health, the Board has suspended the Palace illumination.

Subramanya said Mysore Palace is perhaps the only historic building which is illuminated with the ‘outdated’ incandescent bulbs. Around one lakh bulbs are used to light the entire Palace and it resembles a tinsel world.

The Palace Board specially gets the bulbs prepared from suppliers in Delhi and Hyderabad as the manufacturing of this kind of bulb by leading bulb manufacturing companies was stopped long ago. “On an average, 5,000 to 10,000 such bulbs are procured every year to replace the fused out bulbs. We keep the stock and replace it as and when we require,” Subramanya  added.

He said the Sound and Light  Show,  which also attracts tourists, will resume after Dasara. This too had remained suspended since March this year.