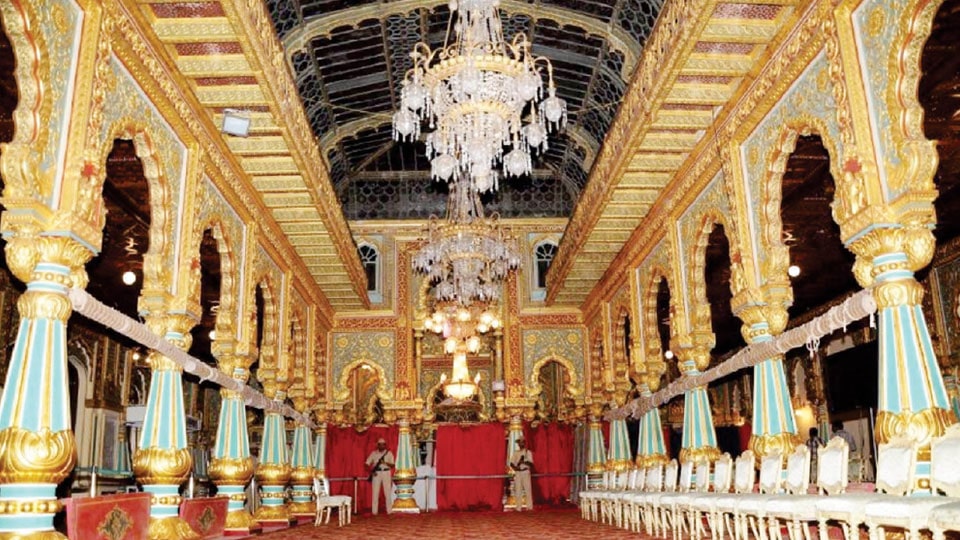 Bengaluru/Mysuru: The Karnataka Cabinet has decided to close the Lokayukta investigations into the gold-leafing work of Durbar Hall and other inner areas of Mysore Palace, alleged misappropriation of funds on the works undertaken to lay concrete floor for elephant sheds inside the Palace and also the charges of allowing a pre-wedding photoshoot inside the    Palace premises.

The Cabinet has found that no misuse of funds had taken place in all the above cases and has rejected the Lokayukta report, Law Minister J.C. Madhuswamy told reporters after the Cabinet meeting chaired by Chief Minister Basavaraj Bommai yesterday.

The Lokayukta had ordered a probe into the Rs. 3.65 crore worth gold-leafing work of Durbar Hall of Mysore Palace issued to reputed independent artist Ganjifa Raghupathi Bhat in an alleged violation of Karnataka State Transparency in Public Procurement Act. The work order was issued after calling tenders and it included supplying and fixing of gold leaf, scraping walls, cleaning, plastering and artistic painting.

The gold-leafing work was part of the Rs. 45 crore allotted by the State Government for the restoration and conservation of the Mysore Palace, which includes the Palace, the private residence of the Mysore king within the bigger Palace.

The selected works included conservation and gold leafing of the private Durbar Hall and Old Durbar Hall of the Palace, its pillars and art works, the four pillars in front of the door of Durbar Hall, pillars in Kalyana Mantap and its side walls. It also included a slew of conservation works sanctioned by the State Government in view of the Mysore Palace completing 100 years.

However, one Javaraju from Nanjangud had filed a complaint with the Additional Director General of Police, Lokayukta, claiming that the gold-leafing work was of inferior quality. Javaraju had alleged that Raghupathi Bhat colluded with officials to illegally get exemption from the Karnataka Transparency in Public Procurement Act 1999 for the Rs. 3.65 crore worth gold-leafing work.

Rejecting the Lokayukta report, the Cabinet observed that it is rare to find artists who do intricate works such as gold-leafing and in such a scenario, critically evaluating, finding faults with the works of internationally reputed artists like Raghupathi Bhat and also making allegations would not be appropriate. The Cabinet also found that funds were not misused in the elephant shed floor concrete works.

‘My integrity was questioned’

Reacting to the Cabinet decision, artist Ganjifa Raghupathi Bhat said that the gold-leafing work undertaken by him inside the Palace eight to nine years ago is there for everyone to see. “It looks as if the work has been undertaken today. The motivated complaint was given by a person who has absolutely no knowledge of art and still I had to face harassment from all quarters in the name of investigation where people questioned my capabilities and integrity,” he said.

“I am glad that the Government is aware of my work and reputation and the Cabinet has cleared my name. I have a strong belief that truth will emerge finally. Lie is a lie forever and the truth is always true,” he added.