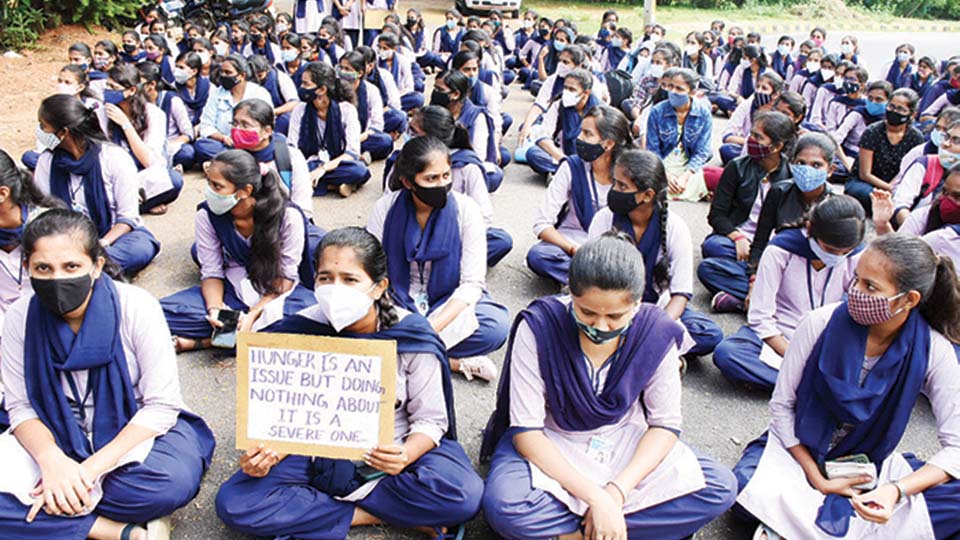 Mysuru: It was a day of student protests in Mysuru as the city was witness to three massive demonstrations at different venues this morning.

Over 200 hostel inmates of Maharani’s Science College for Women staged a demonstration in front of Deputy Commissioner’s (DC) Office urging for supply of food and adequate water.

Contending that though the B.Sc and M.Sc classes started from Oct.18, the hostel dining facility is yet to commence even after nearly two months. Arguing that water has become a scarce commodity in the hostel with severe shortfall in supplies and hygiene being given a go-by in the premises, the protestors said that repeated representations to the College Principal and the authorities concerned have proved futile.

Stating that most of the hostel inmates are from the surrounding districts of Mysuru and are getting their daily food needs  from outside which has resulted in a huge financial burden for them, they said that they were forced to stage the protest as they found no other alternative to draw the attention of the authorities. The hostel students said that they would not withdraw their protest until the Deputy Commissioner hears their grievances.

In another protest, nearly hundred students who have secured Government quota seats in Engineering Colleges, staged a demonstration under the banner of ABVP (Akhila Bharatiya Vidyarthi Parishat), at Ramaswamy Circle on JLB Road, condemning the steep hike in fees.

Maintaining that the fees  last year for Government quota seats was Rs.58,806 and Rs. 65,340 (inclusive of University fee), they claimed that the Government has abnormally hiked the  fees to Rs.83,526 and Rs.90,060 respectively this year, which is a whopping 40 percent. This apart, the Government has asked Engineering Colleges to collect an additional fee of nearly Rs.40,000 as  miscellaneous and skill development fees, which is a huge burden on the students who are already reeling under the effects of COVID pandemic.

Urging the Government to roll back the fee hike in the larger interest of  poor students, they warned of intensifying the strike if the Government failed to withdraw the hike and  keep the fees the same as that of last year.

In yet another protest, students of Yuvaraja College staged a demonstration in front of the College alleging lack of teaching faculty. They carried placards that read ‘Faculty First – Exam Next’ and  such other slogans.

Stating that the College lacked regular faculty in Departments such as Bio-Technology, Computer Science, Microbiology  and MBA, the students claimed that no Bio-technology classes have been held so far and the classes for MBA course is yet to start even two months after the commencement of the academic year (2021-22).

Maintaining that repeated pleas to University of Mysore Vice-Chancellor and other concerned authorities for recruitment of guest faculty have fallen on deaf ears, they said that they are deprived of academics due to no fault of theirs.

Stating that they are withdrawing the protest for the day as the authorities have promised to address the issue by tomorrow, they warned of staging an indefinite protest in front of Crawford Hall from tomorrow if the promise is not met.