Home » Feature Articles » Study of Epigraphy: An appeal to Government of India 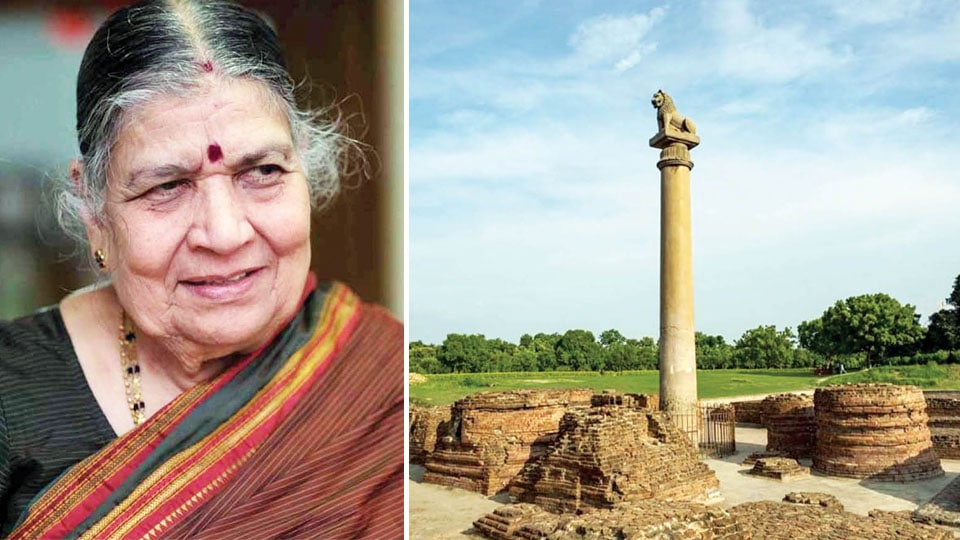 Study of Epigraphy: An appeal to Government of India

It will help write authentic History of India, not the fake or fictionalised one like at present

I was shocked to read the news item titled “Epigraphists Join Nationwide Stir” in Star of Mysore dated 15th July 2021. Epigraphists were manifesting their colère because Government of India was diverting the subject of Epigraphy to other fields like Horticulture etc.

It is well-known all over the world that India is one of the richest countries in the field of Epigraphy. That which is written on stones, imperishable materials like metal plates is called Epigraphy. By and large, inscriptions are in temples. Each temple had its own reader, he or she would explain the facts recorded in charters. In this way, historical facts were publicised, popularised. Besides, every temple had its own archive. Victim of the time, the temple archives have been lost. To the good luck of the researchers and historians, somehow or the other a good number of inscriptions have survived in temples.

The art of writing on stones and other materials started in India, as per the present day research, from the times of King Ashoka of Maurya dynasty, 3rd century BCE. (The antiquity of Indian writing will go back to still earlier date, the day Harappa and Mohenjodaro seals are deciphered.) Ashokan inscriptions are in Brahmi script and the language is Prakrit. This script is at the origin of not only all Indian writings but also in those of South East countries like Nepal, Sri Lanka, Thailand, Cambodia etc.

Originating from Brahmi letters, each region developed its own alphabets yet following the rules of grammar prescribed by Paṇini. The speciality of our Indian writing is that each vowel has a particular sign and when added to the consonant it gives the desired nāda, “sound”. In English when “ut” is added to P or B the pronunciation is not the same. In the Indian writing this problem does not arise. That makes the reading easy and sweetened sounds.

Palaeographers have prepared charts to show the development letters century by century and pointed out how the Brahmi script of Ashokan times underwent changes. It is universally accepted that the “Inscriptions are the official and contemporaneous documents issued by kings, officers and other philanthropists. These inscriptions provide first-hand information for rewriting the history of its country. These records can be classified in different categories such as benevolent grants, memorial stones etc.

By and large, the date, name of the ruler, the occasion for making the grant, details of donation are the main matters of each Epigraph. Memorial stones can be divided in two groups, namely Hero stones and Sati stones. Hero stones, while recording the death of a hero, mention the date and the occasion of the event too. Many a times while recording the purport of the conflict, name of the ruling king, date and the purport of the conflict etc., are mentioned. Heroes who died in combat are taken to heaven by celestial nymphs and pass through the disc of the sun. So they have no rebirth. Often the wives of heroes have courageously sacrificed their lives by jumping in the funeral pyre of their defunct husband. These ladies are worshipped as Goddesses.

Sacrificed Sati images are also carved on stones. They are portrayed with raising the right hand holding sometimes a lemon or a mirror signifying that she was not a widow. All these facts are beautifully depicted in image and many a times accompanied by a brief text on stone.

The study of Epigraphs helps to determine the date of kings, extension of their territories, political, social, religious and economic conditions of the selected period. Inscriptions are like oceans. At every reading, new facts come to light like a hidden treasure in the ocean.  There were poets/learned savants to draft the text, scribes to write it on stones and sculptors to incise the letters. Once the text is ready on the stone, there were readers to read/sing and explain them to the public. Thus the benevolent act of the mécène was publicised and popularised.

In the beginning, a few European scholars in India were interested in the study of Epigraphs. Although James Prinsep is honoured as the decipherer of Ashokan inscriptions, he was helped by many Indian scholars like R.G. Bhandarkar, Bhau Daji etc., as well as Eugène Burnouf, a French Indologist in Paris. As the interest in Epigraphy grew gradually, soon scholars like Kielhorn, Hultsch, L. Rice, J.F. Fleet and Indian scholars namely R.G. Bhandarkar, Bhau Daji, Gopinath Rao, B. Ch. Chhabra and many others embarked on to decipher inscriptions of different periods of different regions and published them with word by word translations, notes and comments in the early volumes of Asiatic Researches, Indian Antiquary and other journals and so on. In the field of Epigraphy, especially with regard to the inscriptions of Karnataka, Fleet’s works hold a prominent place. He had published many Kannada and Sanskrit inscriptions.

When the amount that was allotted for the study of Epigraphy was diverted for the Archaeology, not only Fleet protested against the step-motherly attitude of his Government towards Epigraphy but he even resigned from his post when his pleas went off unheard.

Epigraphic service began to function regularly as part of Archaeological Survey of India (ASI) with its establishment in 1880 in Delhi. Soon branches of Epigraphy were opened in major States and since then copying of inscriptions is continuing with publication of Epigraphic Reports and the text of inscriptions in volumes of Epigraphia Indica and South Indian Inscriptions in the South. But compared to the quantity of charters that India possesses, the publication in these volumes is much inferior. It should speed up. Some of the earlier volumes don’t even have table of contents nor index. Some are published with the text in the local charters without any gist of the text in English. These handicaps should be rectified.

Study of charters in West

In the West, study of charters is much encouraged. I have been living in Paris for more than half a century. I’ll just give an idea about the study of charters and what degree of importance is given there to Epigraphists.

In 1821, Ecole Nationale des Chartes — National School of Charters — was established to study particularly the official charters that were collected and preserved very carefully in the National and local archives. To get admission in this School of Epigraphy, one has to pass a very tough entrance competitive examination. Hardly fifteen to twenty-five students are selected for the whole of France. It is a three-year course. Usually the number of students is fixed keeping in view the number of posts that are going to be vacant after three years.  (How sensible the policy.—Ed) Students are also scholarship holders throughout their studies. Successful students are called Chartistes, “Chartists”. By and large, successful candidates get a post immediately after getting the degree of “Chartiste”.

In Paris there are five Academies and one of them is Académie des Inscriptions et des Belles Lettres. Most members of this Academy are Chartists. Of course, it is well-known that Champollion was the first to decipher the Egyptian inscriptions. He was a member of this Academy. Now also there are members who are specialised in Armenian, Cuneiform tablettes of Iraq and Syria, Chinese. But there is no Epigraphist for Indian Inscriptions. Prof. Pierre-Sylvain Filliozat is the member of the Academie. But he is a Sanskritist. Yet time to time he speaks about Indian Epigraphy.

READ ALSO  Epigraphs before our eyes

Why there are no Indian Epigraphists in the Academy in France? The reason is very simple. Study of Epigraphy had not received much attention in the Government of India and the Indian public. Only in the Universities, Epigraphy is taught. Some recognised institutions like Mythic Society, Kannada Sahitya Parishat, Karnataka History Academy are making efforts to promote the study of Epigraphy, Paleography, Sigillography etc. Every State must have one School, especially for the study of Epigraphy like Ecole Nationale de Chartes in France. The study of Epigraphy should be encouraged.

Students must be prepared to read and interpret inscriptions to shed light on our Indian History. For that, right from the School and High School-level they should be taught the regional language through the centuries and Sanskrit.

When we were students in the fifties, four language formula namely Kannada, Sanskrit, Hindi and English was in practice along with other subjects like History, Geography, Maths and Science.

Our parents never complained that it is going to be very heavy for children. We were learning all the languages and other subjects happily. I was in Dharwad and in a bilingual School. Simultaneously, classes were running both in Kannada and Marathi. We were able to speak Marathi only by hearing our friends speaking Marathi. Thus by the end of final year in the Secondary School we were able to know five languages.

At a tender age children learn easily many languages and it helps to read and interpret Epigraphs. Thus the true history of our country will come to light. Otherwise history will be written on facts recorded in literary sources and many of them present fictions as facts. Fiction-based history is not history. So, my humble plea to the Government of India is to consider and boost the institutions of Epigraphy.

Also my humble request to the Epigraphists is to translate the inscriptions fully instead of giving a resumé of the text with the mere date, name of the king and the purport of the charter. So the foreign scholars who have no access to the Indian languages can also make best use of translations to produce good works on Indian history, its rich heritage and culture.  Epigraphy needs a special attention.

I hope the Government of India will hear our appeal and give much scope for the study and publication of Epigraphy. By doing so, India’s real history will come to light and her prestige will be multiplied by hundred times at the international level.

About the Author: Epigraphist Vasundhara Kavali-Filliozat is married to Pierre-Sylvain Filliozat, a French man, Sanskrit scholar teaching Sanskrit in the Paris University. They spend regularly six months in France and the other six in Mysuru.

Vasundhara works alternately in India to explore the archaeological and literary past of her country and in France to encourage knowledge and appreciation of culture and civilisation of India in general and Karnataka in particular.

Since 2012 she has been organising Sanskrit Day in Paris in collaboration with Maison de l’Inde under the patronage of the Indian Embassy in Paris. She has authored more than thirty books and numerous articles in Kannada, English and French including Vijayanagar Chronicles from 1520 to 1880, published by the National Book Trust, Delhi. This book is prescribed as one of the source books by the University of Delhi for the Medieval Indian History of India.

Vasundhara’s works have been acknowledged and honoured with an award by the Government of Karnataka in 2003. She was elected President of the Twenty-Second Congress of the Karnataka History Academy in 2008. In 2016, she received Chidananda Prashasthi from Chidananda Pratishthana. In 2019, she was honoured with “Itihasa Sanskritishri” title by Karnataka Itihasa Academy and in 2021, “Karnataka Kala Pravartakâ “ title by Namah Association, Chicago, USA.