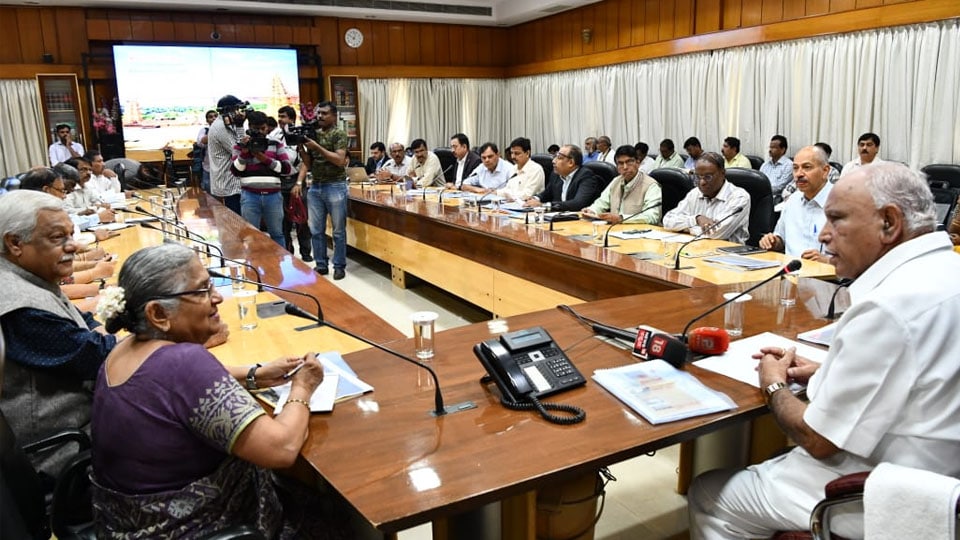 Mysuru: Philanthropist Sudha Murty of Infosys Foundation has been appointed as the Chairperson of the State Task Force for Tourism Development to be formed by the State Government, said Chief Minister B.S. Yediyurappa on Sunday.

The decision of constituting an exclusive Tourism Task Force was announced during a review meeting of the Tourism Department and Department of Culture held at the Vidhana Soudha.

Yediyurappa had invited Sudha Murty to the meeting, following which he made this announcement.

According to sources, Yediyurappa urged the Tourism Department authorities to use the full potential of the tourism opportunities in the State as it will help the Government create more job opportunities locally.  “The new Task Force will meet once a week and I will attend all the meetings. Our goal must be reached,” he said.

Sudha Murty, also the Chairperson of Infosys Foundation, apart from serving the underprivileged by empowering them through education and healthcare, has shown keen interest in tourism also. She is spearheading a project of restoring historical monuments at Melukote of Pandavapura taluk in Mandya District.

Melukote, one among the many historical pilgrimage centres in Karnataka, has over 100 archaeologically significant monuments such as ponds, ‘Kalyanis’ (step ponds), temples, mantaps, and other structures. Many are on the verge of collapse or have been overrun by weeds.

Sudha Murty is also involved in developing and rejuvenating Hebbal Lake in Mysuru, a 40-acre mammoth water body, as a tourist destination. An MoU has already been signed by Infosys Foundation and Mysuru District Administration to conserve and restore this Lake and the Foundation will spend Rs.30 crore on it.

At the meeting with CM Yediyurappa, Sudha Murty told him that there was an urgent need to restore ancient and archaeologically significant monuments across Karnataka and also efforts must be made to introduce such monuments to the people and youth so that an awareness is created on the need of protecting the heritage.

“Though the Department of Archaeology have installed sign boards about the significance of the historic sites, there won’t be information about the history of the monument, the people behind constructing the monument and the efforts involved in such a construction. We need to explain to people about such monuments in detail so that they develop keen interest in them and a desire to conserve the monuments grows within. Only then we will be able to conserve our historical structures,” she told the meeting.

Accepting her suggestions, CM Yediyurappa said that the State Government will extend all cooperation to the Task Force.