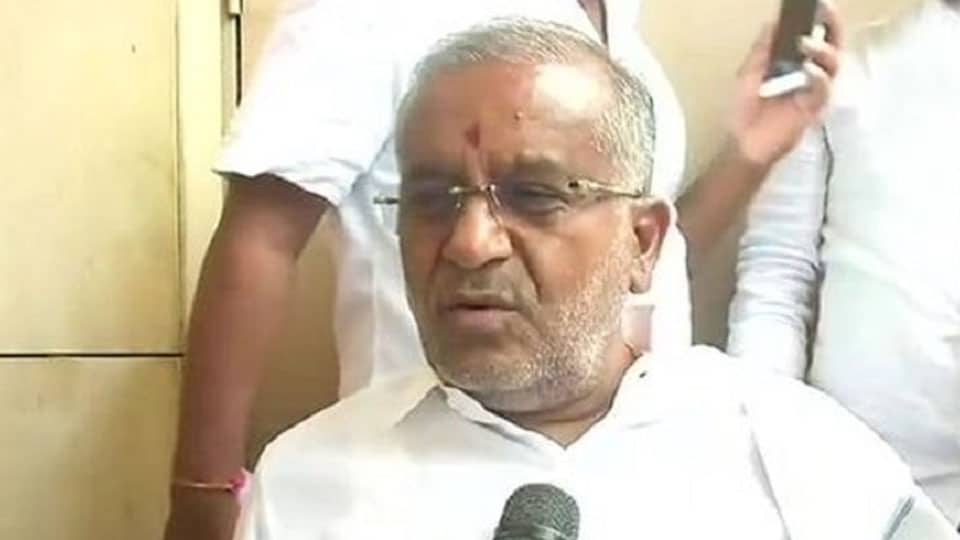 Mysuru: In a surprise development, Chamundeshwari Constituency JD(S) MLA and former Minister G.T. Devegowda (GTD) on Sunday declared that he was going to retire from electoral politics.

Speaking to press persons, Devegowda said that he has been in politics for nearly five decades and now he feels enough of it. As such, he has decided to quit electoral politics and just serve the people to his best capacity in the future.

Recalling his journey in politics, GTD said that the people of Chamundeshwari Assembly segment knew him very well as he has worked with them for nearly five decades. But the present political situation has led him to announce retirement from electoral politics, he said.

Maintaining that he grew up in politics on his own and did not grow up in the shadow of any other leader, he said that he felt pained by all the development that took place in his long                  political journey.

Expressing satisfaction about the work he did as a Minister in the JD(S)-Congress Coalition Government, he reiterated that he had no ‘Political Guru’ and did not receive any help from the likes of JD(S) Supremo H.D. Deve Gowda (HDD), H.D. Kumaraswamy and Siddharamaiah.

Referring to his mega victory against the then CM Siddharamaiah of the Congress in last year’s Assembly polls, GTD said that he won only with the help of party workers and regretted that he could not thank the JD(S) workers after his victory.

Commenting on his son G.D. Harish Gowda’s possible contest from Hunsur Assembly segment in the by-poll, GTD said that it was his personal decision and it was left to Harish Gowda himself.

HDK did not treat me fairly: GTD

GTD also said that former CM  H.D. Kumaraswamy did not treat him fairly for some reason.

Speaking to a news channel, GTD said that what H.D. Deve Gowda had done for the State, could not be done by his   (HDD) sons.

Recalling that when B.S. Yediyurappa was the CM earlier, he had made him Karnataka Housing Board Chairman, GTD asserted that he had not made up his mind on joining BJP and all reports on his possible entry to the BJP were mere speculations. Maintaining that he has the satisfaction of working honestly both as a Legislator and a Minister, GTD said that he has friends in the BJP too, but that does not mean he would join the BJP.