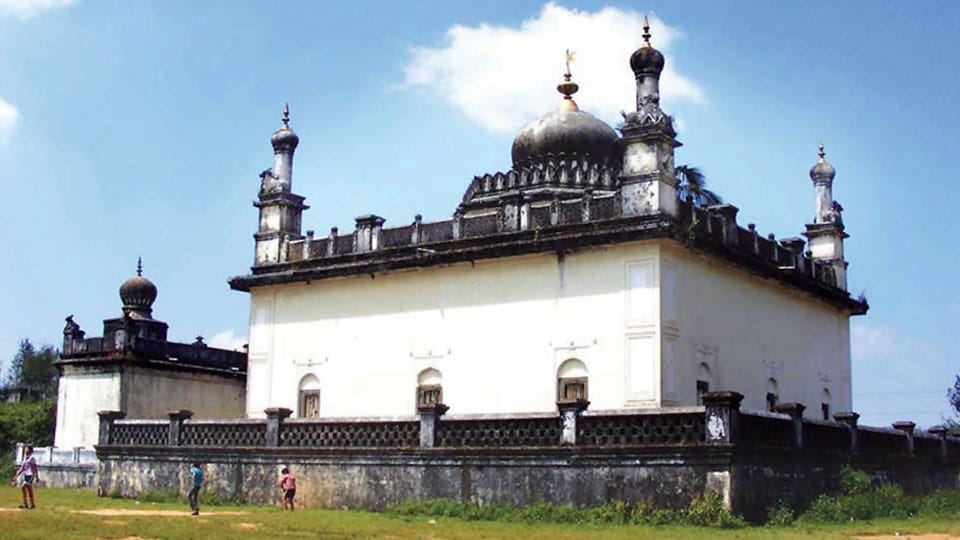 Most of the 19.88-acre land encroached Survey ordered by High Court

Madikeri: Following a directive from the Karnataka High Court to Madikeri Tahsildar to conduct a survey of 19.88 acres of the area where Raja’s Tomb (Rajara Gaddige) is situated at Mahadevpet near Madikeri, the officer began the survey yesterday along with his team and amidst tight Police security.

The survey was carried out under the leadership of Tahsildar Mahesh. In March this year, a Division Bench, headed by Chief Justice Abhay Shreeniwas Oka, while hearing a Public Interest Litigation (PIL) filed by J.S. Virupakshaiah, a former State Information Commissioner, had ordered the Tahsildar to conduct a detailed survey for the Government to reclaim the encroached land.

Virupakshaiah had alleged that there are several encroachments in the historical tomb area. Initially, the Gaddige had 19.88 acres of land. However, most of the land has been encroached and some have even built houses on the encroached land. Even a Government building has come up on the Gaddige land.

The PIL brought to the notice of the Court about 31 families residing in the encroached land. In spite of having no land documents, the Panchayat has provided water, electricity, road and other basic facilities, Virupakshaiah had said in the PIL.

Now the survey has begun with tight Police security. The Court will hear the PIL again on June 17 and the District Administration has to submit a report on the original land, encroached part and other details.

Before the survey team began work, Town Panchayat members Amin Mohisin, Basheer and Mansoor urged the Tahsildar to first demarcate the borders of the Gaddige as they said it is not possible to determine encroachment unless the borders are marked.

Speaking to reporters, Tahsildar Mahesh said that during the last hearing, the Bench had given six weeks for the submission of the report. “Due to COVID and Town Panchayat polls, the survey could not be taken up so far. Now the survey is being carried out as per the Court directions. The exact border of the Gaddige will be identified and demarcated. The land has been listed under the Archaeological Survey of India Survey Number 30/1 and there is 19.88 acres. The Bench has also directed us to prepare a sketch of the entire land and pin-point encroachments. We are trying to bring out the truth regarding encroachments,”  Mahesh said.

There are three tombs built for the royal dynasty. The central tomb which is the largest among the three is of Kodava king Doddaveerarajendra and his wife Mahadeviamma. The right tomb is built by Chikkaveerarajendra for his father Lingarajendra in 1820.

The left tomb belongs to Veerarajendra’s guru Rudrappa built in 1834. Closer to the tombs is the burial place of the two brave royal officials Biddanda Bopu — Bopu Dandanayaka — and his son Biddanda Somaiah,  who sacrificed their life fighting with Tipu Sultan. In fact, Doddaveerarajendra had erected a plaque in the memory his soldiers in 1779.

Rajara Gaddige is one of the tourist attractions in Kodagu and tourists who visit Abbey Falls will pass Rajara Gaddige en route. However, it is in deplorable condition owing to the negligence of the Government and encroachment of land by local residents and vested interests.

The Gaddige land became is controversial as the people who have encroached have the blessings of certain politicians who have consistently opposed any move of eviction and also development. Last year too, the Kodagu District Administration had attempted to conduct a survey of the land to determine the encroachment but the survey was withdrawn after protests from encroachers.

Years back Madikeri Urban Development Authority had tried to develop the Gaddige into a tourist attraction. But it could only reclaim 3.5 acres and the rest of the land remained with the encroachers who opposed any move to evict them. Surprisingly, with their clout, the encroachers have managed to obtain all municipal facilities including water, power and roads.