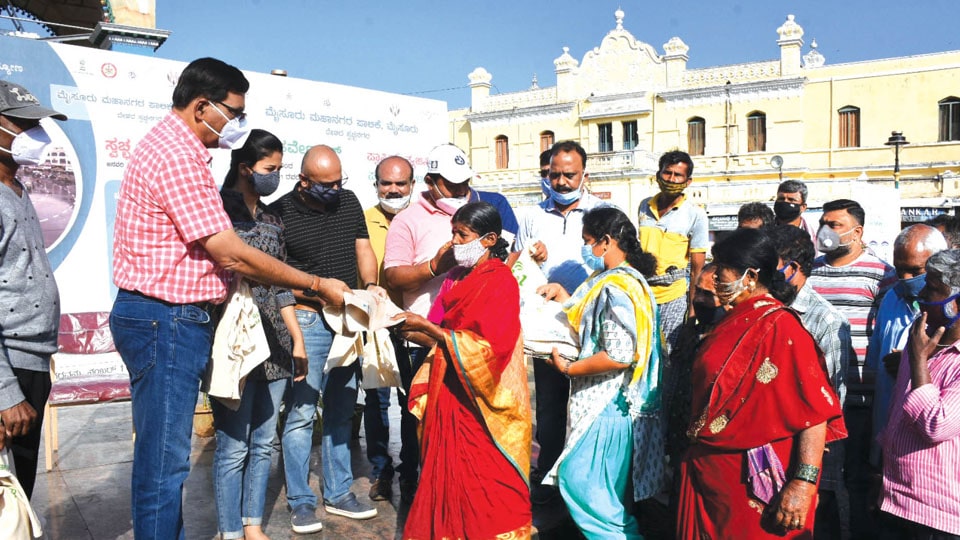 Mysore/Mysuru: In a bid to create awareness on using alternative products in place of banned plastics, the Mysuru City Corporation (MCC), as part of Swachh Survekshan – 2021, created awareness on recyclable plastic at an event organised in front of Dufferin Clock  Tower yesterday.

Speaking on the occasion, Deputy Commissioner (DC) Rohini Sindhuri, who stated that plastic was more dangerous than a nuclear bomb, said that many have shun plastic products and more and more people were now seen carrying cloth bags   for shopping. Pointing out that a lot of women Self Help Groups (SHGs) were indulged in manufacturing cloth bags and paper covers, the DC said that there were plans to open two outlets for them to sell their products.

Humorist and Kannada Professor Krishnegowda, who was the chief guest, said that every organisation in city should actively participate in Swachh Survekshan and should take efforts to create awareness on cleanliness among the public.

Students of MMK&SDM Women’s College staged a street play on cleanliness on the occasion. Cloth bags and paper covers were distributed to the public. Recyclable waste, cost of its purchase per kilogram and what products could be manufactured from these wastes were also displayed at the venue.

Pointing out that Swachh Survekshan-2021 was in progress in city, the DC said that one lakh Mysureans had voted through Swachh Survekshan app till date and added that the voting is open till March besides urging the public to vote in large numbers.

Stating that though single-use plastic was banned, it was still in use as it is not implemented effectively, she called upon the public to shun usage of plastic voluntarily as single-use plastic does not disintegrate or gets destroyed even after thousand years which eventually cause harm and damage the environment.

READ ALSO  No illegality in my tenure: MUDA Chairman