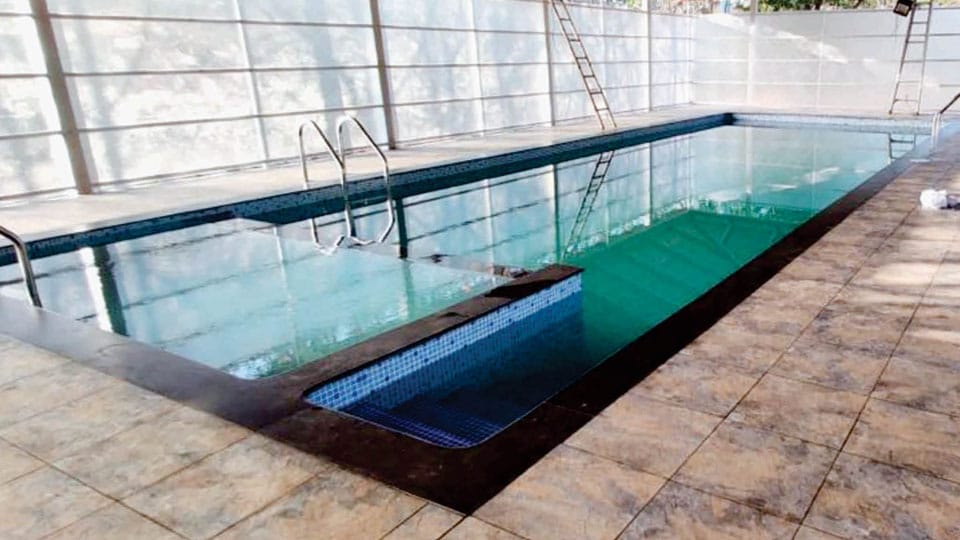 Campaign continues even after Govt. ordering probe by Regional Commissioner

Mysore/Mysuru: The legality and alleged illegality of swimming pool at the DC’s bungalow ‘Jala Sannidhi’ on Hunsur Road has refused to die down even after the transfer of IAS Officer Rohini Sindhuri from Mysuru as Deputy Commissioner.

The continuation of the issue comes at a time when the State Government has already asked Regional Commissioner (RC) Dr. G.C. Prakash to probe the swimming pool construction and after a clarification was sent to the RC by Rohini Sindhuri where she has stated that the construction of the pool was a pilot project under Nirmithi Kendra Society and there were no violation of heritage norms.

Reports in a section of the press today claimed quoting unnamed sources and officers that the former DC had not obtained permission and has allegedly violated mandatory-to-be-followed norms.

The reports stated that officers who had requested anonymity had said, “The 650 sqft swimming pool that has a capacity of 60,000 litres has been built at a cost of Rs. 28.72 lakh with a modern ozonisation technology and there is no need of changing water frequently and there is no requirement of recycling of water and chlorination.”

As the pool has a roof there is no question of water being evaporated and the construction has been completed using Nirmithi Kendra’s funds that had been saved from other projects after taking approval from the Board of Directors. The water for the pool comes from the supply to the DC’s residence, the report stated.

However, Prof. N.S. Rang-araju, Member, Expert Commi-ttee for Development and Protection of Mysore Heritage Region and Convenor, INTACH (Indian National Trust for Art and Cultural Heritage) has been quoted in the report as saying that the violation is clear. “The DC’s residence is not the only heritage structure but the area that covers the bungalow is a heritage property too. As per new rules and regulations, seeking permission from the Heritage Committee is mandatory and works on heritage properties must be carried out as specified by the Committee. It is clear that heritage rules have been violated while constructing the pool,” the report quotes Prof. Rangaraju as saying.

The report also stated that on June 5, K.R. Nagar MLA S.R. Mahesh has written to the Chief Minister B.S. Yediyurappa to suspend Rohini Sindhuri for violating heritage norms by laying vitrified tiles at the DC’s bungalow while renovating the place for Rs. 16.35 lakh.

Meanwhile, the Mysuru Urban Development Authority (MUDA) has been asked to constitute a Heritage Protection Committee as per the 2020 Heritage Regulations (amendment) Act. Commissioner of Department of Archaeology and Museums B.R. Poornima has written three letters to MUDA.  MUDA Commissioner Dr. D.B. Natesh, however, said that the new heritage regulations actually hinder development. “We will request to keep Mysuru out of the heritage regulations,” he has stated as per the report.

Let a proper authority comment on this: Rohini Sindhuri

Reacting to the reports on swimming pool, Rohini Sindhuri told Star of Mysore this morning that let a proper Government authority or the Government itself certify that the pool is illegal if at all it is instead of somebody else commenting on that.

“The Government has asked the Regional Commissioner (RC) to do an inquiry regarding the issue and the RC will submit the report to the Government. Somebody alluding and saying something on the pool that has been built as per norms is just motivated. What they are doing even after getting me transferred is in full public knowledge. All are scared that the land issue will come out one day or the other. And hence the malicious campaign,” she said.

“I have never spoken about the swimming pool until the Government asked me to give a report to the RC. Moreover who are these guys who have been quoted in the report? They have just slandered without identifying themselves. Either the RC or the Government must say there is a violation in the heritage norms. Let the RC report facts,” she added.

“After yesterday’s Star of Mysore headline that said, “I paid the price for confronting land mafia,” why are some political leaders reacting on that? I have not even named anybody when I spoke. Why are they getting jittery and saying that there is no land or land mafia or real estate boom? Why are they still continuing the smear campaign? Moreover, can I carry the swimming pool wherever I go? It is for posterity,” she said.