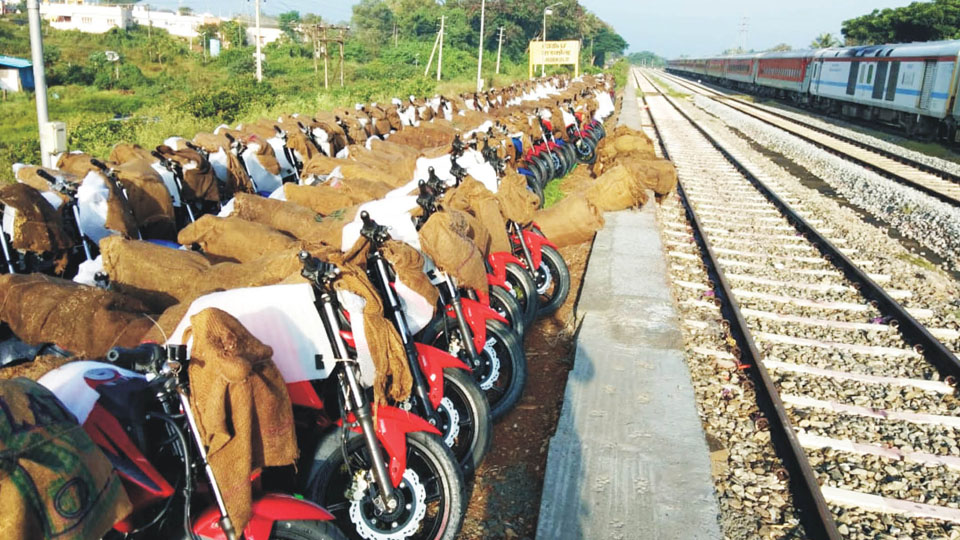 The Division transports 5,500 two-wheelers in a month, earns Rs. 1 crore

Mysore/Mysuru: In line with Railway Board guidelines, South Western Railway (SWR), Mysuru Division, has constituted Business Development Units (BDUs) to widen its freight basket. The efforts have yielded good results by bringing back the automobile traffic to the Division after a gap of two years.

SWR Mysuru Division has loaded 5 Newly Modified Goods (NMG) rakes of two-wheelers in last one month from Kadakola. The NMG rakes have a composition of 25 coaches to carry automobiles. On an average, 1,000 two-wheelers are being transported in every rake.

In total, these five NMG rakes carried around 5,500 two-wheelers generating around Rs. 1 crore revenue to the Division.

In addition to this, Mysuru Division has loaded ginger, arecanut,  pepper and other agricultural commodities facilitating farmers to transport their products. Iron ore was loaded for the first time from the division to destinations like Goa and Roha.

In view of expanding the Division’s freight basket, Divisional Railway Manager (DRM) Rahul Agarwal has constituted five sub-divisional units of BDU for commercially important places like Hassan, Arasikere, Davangere, Subramanya and Shivamogga. This will help Railways to reach out to local markets and farmers effectively, thus increasing the ease of doing business.

In a digital initiative, SWR  Mysuru Division has launched a mobile application called SWIFT (Single Window Interface for Freight Transportation) which acts as one point destination for goods and parcel booking, according to a press release from Priya Shetty,